Having worked in downtown Omaha for more than five years, and living downtown for about seven years before that, I know my restaurants in the area. And I know which ones are great to take kids to. If you’re looking for a family restaurant in downtown Omaha, here are some of my recommendations:

While there are a handful of restaurants in the Old Market that serve breakfast or brunch, when it comes to dining with kids, we usually go for something fast.

My two favorite donut shops in Omaha happen to be downtown.

Olsen is strictly a carry-out, hole-in-the-wall kind of bakery, but don’t let that deter you. They have, quite arguably, the best donuts in Omaha. Not only do they taste good, they’re cheap, too.

Like Olsen, Pettit’s downtown location does not have the most eye-catching exterior. But never you mind. You’re there for the donuts. This is also carry-out only.

Not into sugary treats so early in the morning? Check out the brunch at Upstream Brewing Co. While there isn’t a kid’s menu, it’s breakfast and if they’re hearty eaters, they’ll be fine. Breakfast is only on Saturdays, and my favorite time to go is when the weather’s warm and the outdoor seating is open.

By all appearance, this looks like a gastropub where grown-ups want to hang out in peace, but they’re pretty welcoming to families.

The kid’s menu is above-average here (try the chicken strips), and the location can’t be beat for games and shows at TD Ameritrade Park and CHI Health Center. Plus, they have a changing table in the bathrooms.

Block 16 is one of the most popular sandwich shops in Omaha. It’s so good, it has one of Alton Brown’s favorite burgers in all of America. The croque garcon is a messy, but delicious creation.

But, being so popular often means a long wait. So it’s tricky bringing kids here, especially if they’re cranky when they’re hungry. I think the wait is worth it, but you be the judge. NOTE: In 2021, the restaurant is temporarily take-out only.

While here is no kid’s menu, I’ve had my kids split chicken fingers when we’ve gone there.

Tucked in the corner of the upper level of the Durham Museum is an old-fashioned soda fountain. You’ll need to pay admission if you’re going to dine there (so might well plan to explore the museum’s trains and exhibits).

Sure, it’s a horror movie-themed restaurant, but Monster Club has plenty to appeal to older kids. The menu is primarily burgers and sandwiches, with decent options on the kid’s menu.

The decor is full-on, pop culture monster movies, but not gruesome. It’s more nostalgic than anything else.

Trini’s is located in my favorite part of the Old Market: The Passageway. It’s a charming indoor space with shops and restaurants.

Trini’s is pretty casual and budget-friendly Mexican food. While there is no kid’s menu, it’s pretty easy to find something suitable for a kid’s appetite.

I know. A brewery? I’ve gone for brunch, lunch, and dinner and my kids have always been welcomed. There’s usually some form of entertainment to occupy them while we wait for the food.

They also happen to have great beer. The upstairs area will be more of a bar-like atmosphere, so stick to the first floor or the outdoor seating in front.

We’ve even gone on Mardi Gras with kids and had a blast. They had live music and a face painter. And beads, of course.

My kids are touch and go with seafood, but I can often get them to eat the fish sticks at Plank. The menu for adults and kids is pretty good (try to get there at happy hour for the best deals), and when we went, they gave my kid fun temporary tattoos.

A more casual place to go for seafood is Shuck’s. While Plank has the charming Old Market as its neighborhood, Shuck’s is tucked in a rather unappealing part of downtown Omaha. Don’t let it deter you.

It’s great for families, with paper on the tables for coloring and a decent kid’s menu. I like the Cajun options there.

The small outdoor patio in the back is a nice refuge, too.

Lighthouse Pizza – One Omaha’s newest entertainment districts, the Capitol District, is not just for grown-ups to enjoy (though there are plenty of bars to visit). If you’re at the CHI Health Center, you may want an easy-to-walk-to dining option for your family.

You’re looking for Lighthouse Pizza. They have ridiculously large slices of pizza, which is your kid has an appetite, got that route. There’s also a small kid’s menu, as well. It’s take-out only right now; dine-in is temporarily closed.

It’s Omaha’s longest-running restaurant for a reason. The garlic bread is my favorite, though it hardly makes a meal, so go ahead and order a sheet of pizza.

Orsi’s is mostly carry-out, though they’ve been known to set up an impromptu table for dining in. 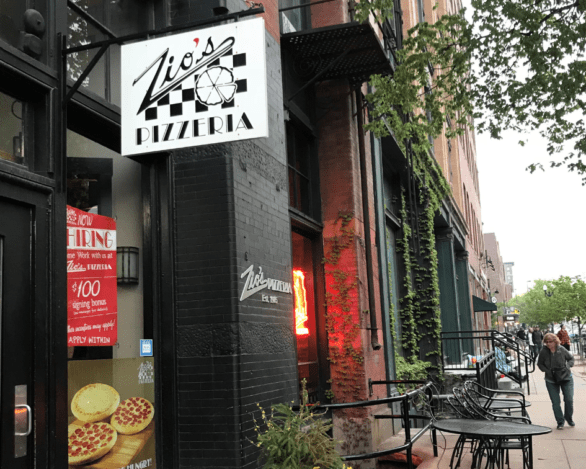 Zio’s is a bit of an institution in Omaha. If you dig New York-style pizza, try it out because it is pretty tasty pizza. There is a kid’s menu, and often, the waiter will bring a ball of dough to the table to keep your kid occupied.

Headed to the Omaha zoo?

Have plans for a day at Omaha’s Henry Doorly Zoo & Aquarium? You can purchase food there at plenty of dining locations, but they aren’t always satisfying and they’re definitely pricey.

If you didn’t pack a lunch, here’s a nearby option we like:

Louie M.’s Burger Lust, 1718 Vinton St. Located in the historic Vinton neighborhood, this small but charming burger joint is going to please both kids and parents. I brought the kids here after a trip to the zoo recently, and was pleased they had a kid’s menu. Order a burger, obviously.

These look amazing. We are trying to plan a trip to Omaha in the next year or two so we will have to check these places out

I'm always looking for tasty alternatives to our tried and true favorites in Omaha. I am excited to give some of these a go next trip up north!

You'll have to let me know if you try a new one the next time you're here!

The business name is Blatt, not "Blatte" .

That's an embarrassing typo! Thanks for the correction. I've fixed it.