Posted on Published: January 11, 2018 Categories Where To Eat In Omaha 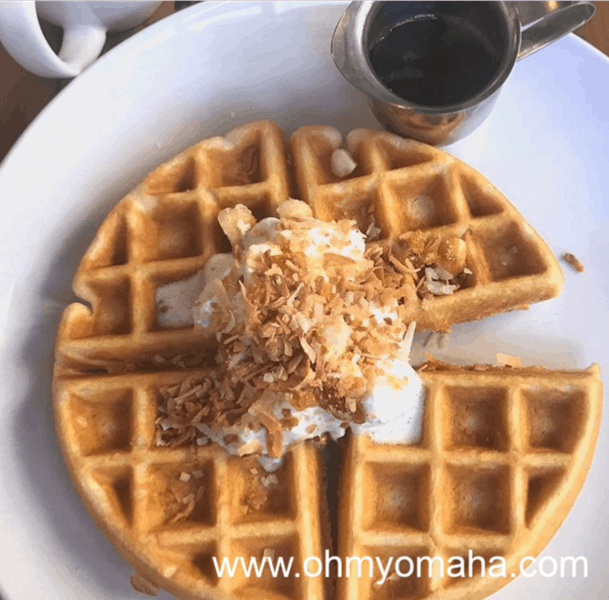 Omaha is a city that loves food. There are a lot of great, locally-owned restaurants producing creative dishes. If you’re short on time and wondering what the best restaurants in Omaha are, you’re in luck. I’ve already sought out the answer.

2021 UPDATE: This post was first published in January 2018 and has been following the announcement of The Grey Plume closing and the earlier closure of Leo’s Diner. Current regulations require face masks indoors in Omaha, except when eating. If you see an error, please comment or email me.

I can’t tell you what’s my favorite restaurant in Omaha is, because it’s like picking a favorite child. Can’t be done. So, here are my favorites, the ones I’d tell you are the best of the best.

Love a hearty breakfast? Go to either (1) Lisa’s Radial Café in Midtown or the (2) Farm House Cafe & Bakery in South Central Omaha. I’m also partial to the benedicts at (3) Bailey’s.

Want the trendy breakfast or brunch spot? You’re going to want to go to the (4) Saddle Creek Breakfast Club in the Dundee neighborhood or (5) Early Bird in Blackstone or its new, second location at Shadow Creek Towne Center in Papillion.

Staying on the topic of brunch, there are a couple of fun options that have nearly-bottomless mimosas (buy a certain amount and the rest cost a penny). Check out (6) Herbe Sainte, a Cajun restaurant in Aksarben Village, and (7) Timber at Countryside Village. Both have outdoor seating options. Brunch in Omaha is typically Saturday and Sunday only.

Just want a good donut? The best are at (8) Olsen Bake Shop, not too far north of Omaha’s zoo. There are quite a few donuts shops I’d recommend, though, so read my Omaha donuts post if you want to visit a few to compare (call it “research”).

For even more breakfast ideas, read 19+ Best Places To Get Breakfast In Omaha.

You can’t go wrong with places like the charming (9) Stirnella in the Blackstone or (10) Dante Pizzeria Napoletana in West Omaha. They’re nice enough for a date nice but they’re not going to drain your checking account.

If you’re in the Old Market, try lunch at (11) M’s Pub or (12) La Buvette. Get the lavosh at M’s, order a bottle of wine at La Buvette. Wait, I guess we’re talking about lunch, huh? Just get yourself a glass.

If you’re looking for restaurants to impress someone, though, you’ll want to make reservations at (13) The Boiler Room or (14) V. Mertz in the Old Market. Both have amazing food and beautiful atmosphere.

Further out west, I’d recommend (15) Dolce or (16) Au Courant Regional Kitchen. Try the tasting menu at either of them. I’ve tried them both and they’re great. I’d describe their menus as creative fine dining.

One restaurant on my to-visit list is (17) Avoli Osteria, which I’ve heard this is THE place to truly wow people. The cuisine Northern Italian.

If you’re in the mood for sushi, there’s a city-wide debate on who does it best: (18) Yoshitomo in the Benson neighborhood or (19) Umami Asian Cuisine. They’re both super creative and popular. I prefer the more low-key sushi restaurant, (20)Matsu Sushi.

For a bit more casual, pub or gastro-pub options, I’m partial to (21) Crescent Moon near the Blackstone and (22) Blatt Bar + Table (there are several locations, I like the original near TD Ameritrade Park). Side note: The Crescent Moon also has a fun German bar downstairs and a Belgian bar off the main room.

If you’re dining with kids, Blatt would be my go-to pick on this list. If your family is staying downtown, you’ll want to read 8 Great Kid-Friendly Restaurants In Downtown Omaha.

(23) Block 16 is probably the most popular casual restaurant in Omaha, though. There’s a reason why there’s nearly always a line at Block 16. It’s that good.

I’m partial to the Croque Carcon burger, and not just because Alton Brown deemed it one of the best in the world (though, I do feel like his opinion means something).

Don’t want to wait for a great burger? Try (24) Stella’s Bar & Grill in Bellevue – though, come to think of it, there’s probably going to be a wait there, too. Try (25) Dinker’s. It’s a bit of a hole in the wall, but don’t be scared off by the exterior. It’s popular, been around for more than 50 years.

For good soul food, head to (26) Big Mama’s Kitchen & Catering, which has relocated to inside the Accelerator Building. Get the fried chicken, and save room for sweet potato pie.

I can’t make an Omaha restaurant list without including ice cream. It’s big here. The three heavy hitters in Omaha are (27) Ted and Wally’s (with Old Market and Benson locations), (28) Coneflower Creamery in the Blackstone District and (29) eCreamery in Dundee.

Coneflower will almost always have a wait, so I tend to stick with Ted and Wally’s.

Little tip about Ted and Wally’s: The Benson location never has a line quite like the Old Market location. If you want more ideas, read 8 Great Ice Cream Shops In Omaha.

Tip: There’s a great book out called “Unique Eats and Eateries of Omaha,” and it includes many of these top restaurants!

I’ve written a lot about pizza, and most Friday nights, I like to find a new-to-me pizza place to try. (30) La Casa Pizzaria is my all-time favorite pizza in Omaha. The crust is unforgettable. It’s thin, for sure, so if you don’t like that kind of pizza, don’t go to La Casa.

(31) Mangia Italiana is probably the most favorite by locals. Mangia beat out 31 other pizzerias to be named the best in a metro-wide pizza tournament. See the brackets and who won each round in this post.

Other restaurants I recommend you try in Omaha

It’s tough writing a post like this in Omaha, since we have fantastic restaurants opening annually, as well as some long-running establishments that are nostalgic favorites. I’ll go through some of the neighborhoods in Omaha and share my restaurant recommendations, beyond the list above.

Lo Sole Mio has a special place in my heart. One of my first dates with my husband was there. Expect heaping portions of delicious Italian food here. You’re already going to have leftovers, so go ahead and order the bruschetta for an appetizer. You’ll thank me later.

I’m partial to this tiny Italian restaurant on the edge of the Old Market. The food is so fresh and so good. Reservations are a must, and if the weather is nice, sit out on the patio.

There’s something cozy about this very contemporary place. It must be Via Farina’s giant wood-fire oven. Whatever you order, it’s going to be the most satisfying meal in memory, without feeling like you overeat. They portion things well.

This is my favorite restaurant to go to if I’m attending a show at The Orpheum. It’s a gastropub with an impressive beer list. Vegetarians, I recommend the beet burger.

I nearly cried when I heard Ahmad was closing his restaurant in the Old Market. That was over a year ago and luckily, he reopened it near Dundee, and it’s just as good as it ever was. Ahmad is great with recommending dishes, plus this is a vegetarian’s dream restaurant.

A surprise hit with my family, this restaurant tucked in a strip mall north of Blondo Street is a gem of a restaurant. Chaikhana specializes in eastern European cuisine, and as close as you’re going to get to Russian food in Omaha.

Want to feel like you’re in a European bistro for a night? Go to Dario’s located in the Dundee neighborhood. With all the amazing things on the menu, I feel a little silly telling you to order fries, but they really are that good. They compete with the best fries I’ve had in my life – in Brussels – they’re that good.

I discovered this Venezuelan restaurant during quarantine. The Hunger Block also serves food from other Central American and South American countries, as well as some wickedly large shakes.

Omaha has become known for its steaks, but we do venture away from meat from time to time. Modern Love is a vegan restaurant at Midtown Crossing that is top notch, and will impress even the biggest meat eater in your group. It’s seasonally-based, so I’m not sure which dish to recommend (I was impressed with the mac and cheese).

Now with four locations, it’s easier than ever to get the best Thai food in Omaha. My notoriously picky kids even dig into Salween Thai.

I’d make the drive over and over again to get some barbecue from Porky Butts. They have a devoted fan base, and the reason? Award-winning barbecue.

Omaha has a lot of food trucks. A LOT. And most are pretty good. A few of the best are found regularly at Trucks & Taps, an outdoor bar and food truck stop. There are enough choices for everyone’s taste, though my kids are usually too picky to enjoy it.

OK, OK, it wouldn’t be an Omaha restaurant post without mentioning Omaha steakhouses. I’ve visited quite a few of the long-running establishments.

Related post: Where to get the best steaks in Omaha

For a unique atmosphere with your steak, head to (44) Brother Sebastian’s. It’s like a monastery-like setting. Most long-timers in Omaha are going to send you to (45) The Drover, home to the whiskey steak.

There’s one that we go to more than the others – (46) Flagship Commons located inside Westroads Mall. My kids love it. I love it. We’re all happiest there. I usually get something from Yum Roll while my kids opt for The Blatt.

Be sure to download the app Together A Great Good so you can do good while dining out! Some of these restaurants will donate a percentage of your bill to the charity of your choice. Restaurants on this page that contribute include: Au Courant, Block 16, and V. Mertz.

This post was first published in January 2018 and was updated 2020 to reflect closings and address changes. 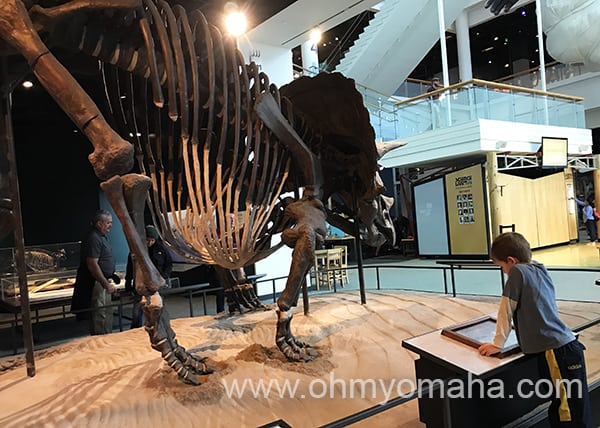 Previous
What Young Kids Like At Science Museum Of Minnesota 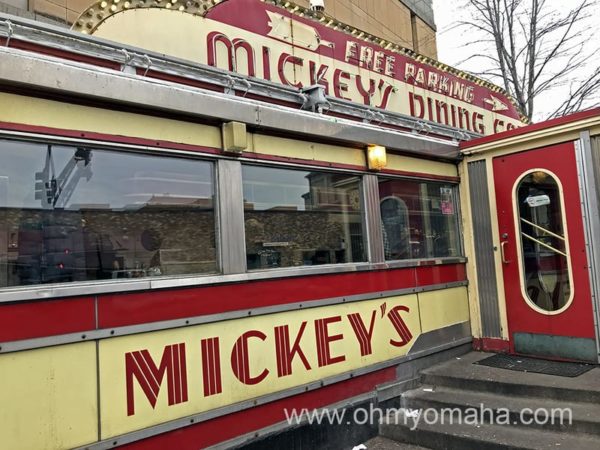 I just happened upon your blog while looking for local restaurants to support during COVID-19, and I appreciate your diligence in updating the list so it aligns with the current situation. I have one addition to add to this list: Tasty Pizza. It is a quite small restaurant with amazing prices and the most delicious pizza that I have ever had. Their crust is similar to a delicious baguette, a perfectly crisp outside with a soft inside, and, frankly, I would buy loaves of it. They top this delectable base with a myriad of scrumptious toppings, creating what I believe to be the perfect pizza. I can't recommend them enough. They are open for takeout during the quarantine, so dine, indulge, and support a wholesome local business.

Tasty Pizza has been on my to-try list for so long, I'm a little embarrassed I still haven't been there!

All my faves because they are veg* Friendly!!