Road tripping across Nebraska can be long and boring if you don’t have a plan for rest stops (other than “to get to the other side”). Interstate 80 cuts through Nebraska, running east to west and surrounded by mostly flat farmland. If you stick just to the interstate rest stops and visitor centers you’d think Nebraska is pretty dull. Plan a few road trip stops, though, and see a more interesting side to the state.

For this route, we’re heading east to west. Most stops are fairly close to the interstate, though a few are a couple miles from it but they’re worth it. 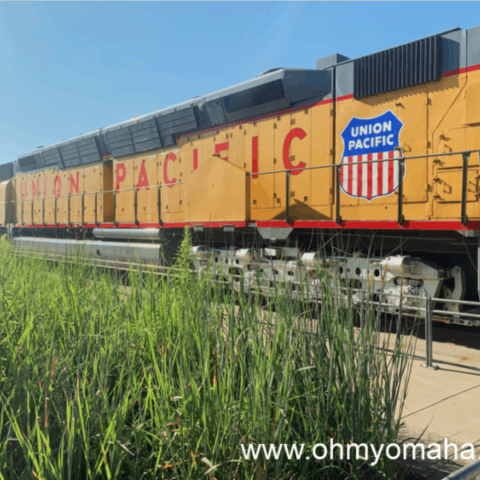 Omaha is a city that needs a day or two to really see the highlights. If you only want a single road trip stop that captures part of Omaha’s history, I recommend Kenefick Park, which commemorates the city’s history and connection to the railroads.

It’s next to Lauritzen Gardens, which could be an additional stop. Allow about an hour if you only stay indoors in the conservatory. Allow at least two hours if you're going to explore the grounds (which I recommend). 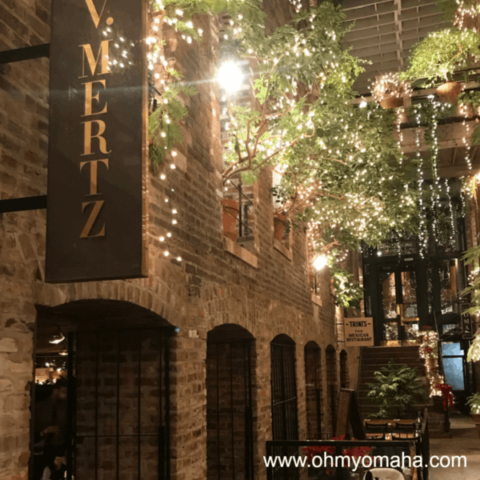 Where: 13th to 10th streets along Howard Street, Omaha

If you have more time, like an hour or so, visit Omaha’s Old Market. Local shops, a record store, great restaurants, and boutiques line the brick streets. 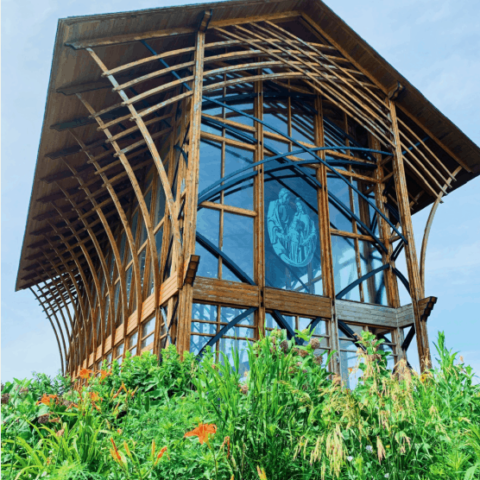 The gorgeous architectural wonder overlooks Interstate 80 from a grassy hill. It’s a shrine and chapel, yes, but you don’t have to follow a particular religion to enjoy it.

For a longer pit stop, one of the few outlet malls in the state are located in Gretna. You can’t really miss the place along I-80. Outlets include Kate Spade, Under Armor, and Gap. 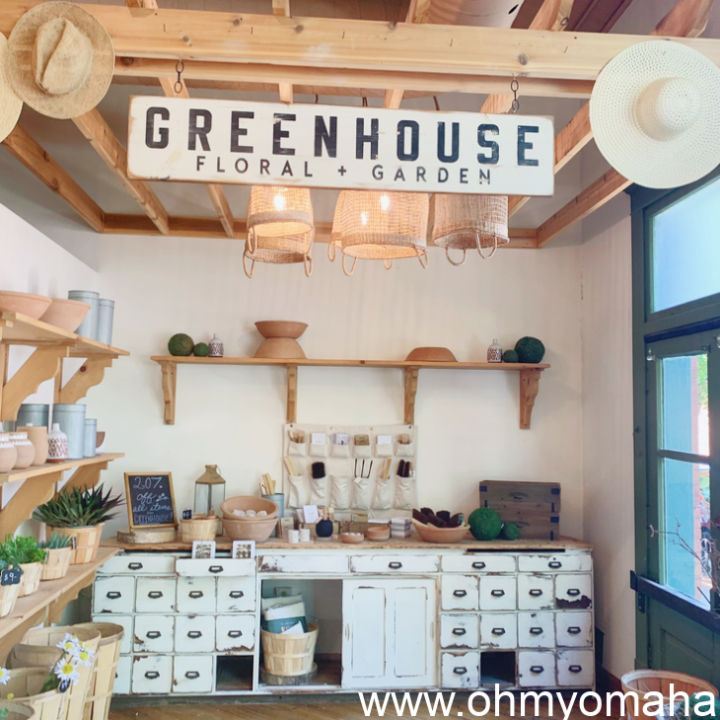 These two shops will charm you right when you enter their doors. The mercantile sells farmhouse style home decor and Postscript is a letter-writer’s dream. 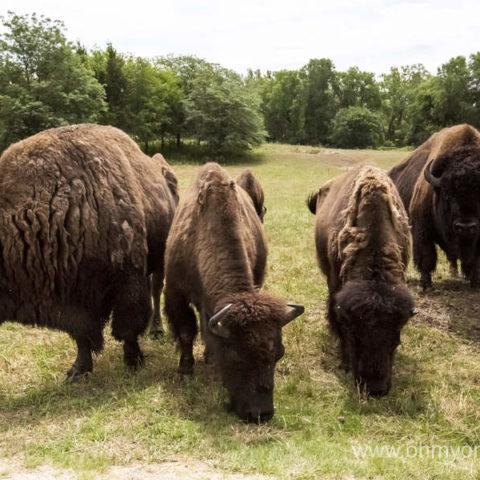 While this will certainly add to the time you spend in the car, it’s a fun place to visit. You’ll drive a bison range and come awfully close to Sandhill cranes. There is a place to park and take a short hike to see bears and wolves.

You're also not far from Strategic Air Command & Aerospace Museum (28210 W. Park Highway) if you're looking for an indoor activity in Ashland. 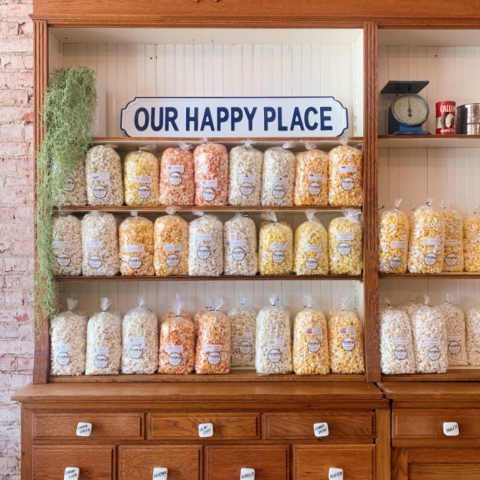 Grab snacks or tasty gifts to bring home at GoodyPop. The gourmet popcorn comes in a variety of flavors and it’s nearly impossible to leave without picking out a few. 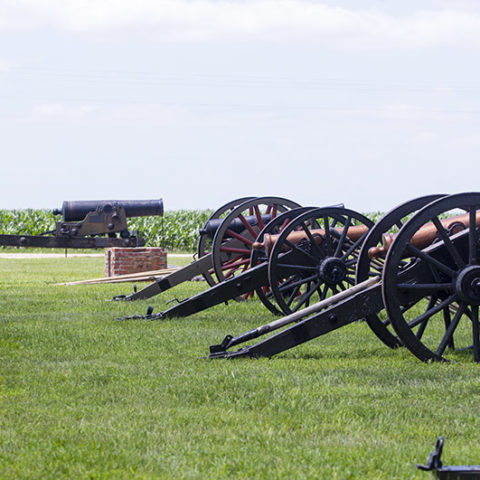 Stretch your legs and check out an old military fort here. This is a particularly good stop for those with kids who need to run off some energy. 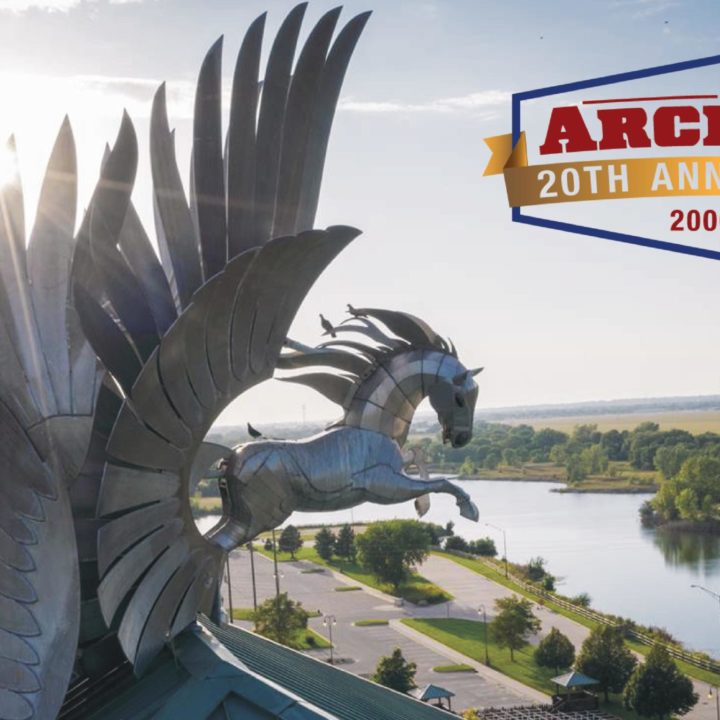 You’ll pass under the museum but don’t worry, the exit for it is past the museum (well, if you’re heading east to west). Learn about pioneer and plains history here. Allow for this to be a longer stop. This quick stop — the Pony Express cabin that housed the stop is teeny tiny — will offer a glimpse into a little known morsel of Nebraska history. 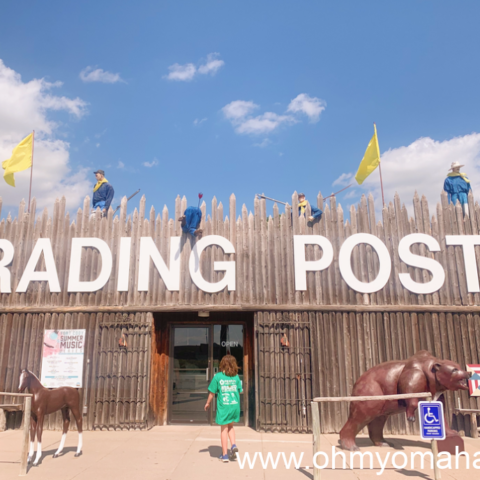 I’ve got to have at least one tourist trap on this list. Don’t worry, I’m pretty sure the Trading Post embrace sthe fact. Get your Wild West souvenirs here, plus see the 20,000 hand-carved figures in the Buffalo Bill’s Wild West in Miniature display. 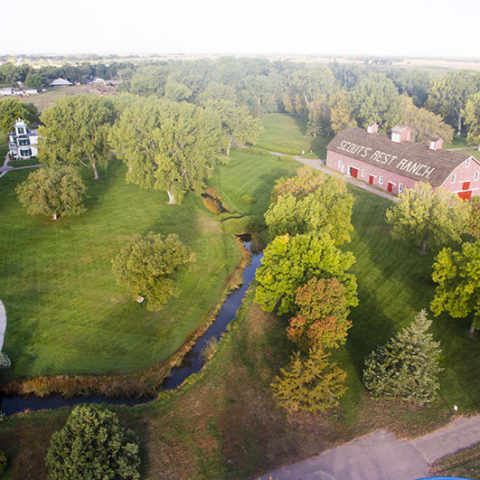 The Trading Post is so close to the interstate, it’s tempting skip the actual, official Cody site in the town. It’s a bit further from the interstate, yes, but you can have a glimpse at the life of one of the U.S.’s most intriguing personalities as you explore the farmstead. 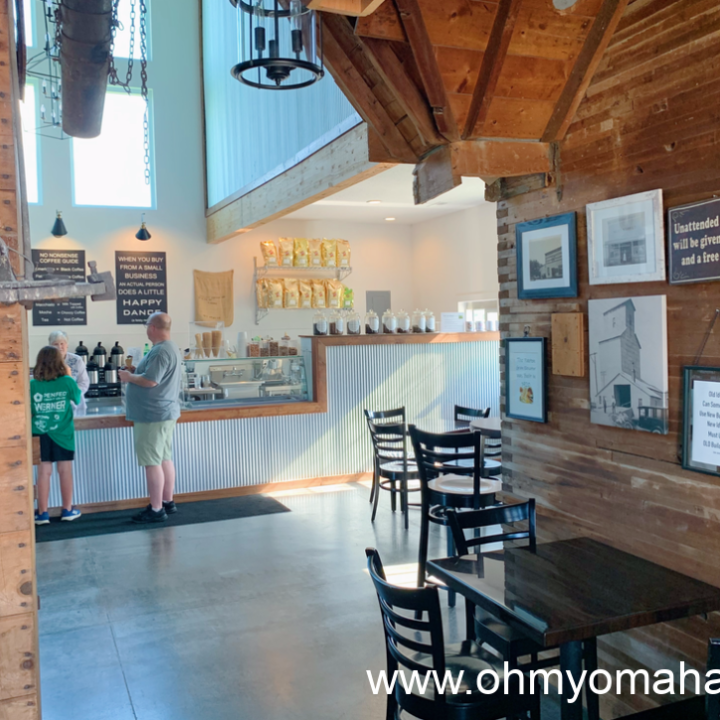 This little ice cream and coffee shop is housed in a former grain elevator and it’s every bit as rustic and cute as you could imagine. The owner is pretty nice, too.

Peak Inside Ann Marie’s Antiques next door while you’re there. 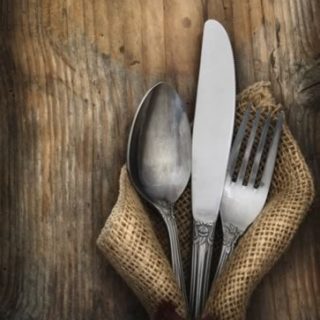 For a longer stop in Paxton, like a hearty dinner, go to the quirky Ole’s. I say quirky because some people are a little put off by all the taxidermied animals watching you as you eat. It’s a memorable meal.

A few of Nebraska’s most iconic landmarks — Chimney Rock, Scotts Bluff National Monument, Courthouse & Jail Rocks — are several miles north of Interstate 80 in this part of Nebraska. Having waited until I was over 40 to see Chimney Rock, I can say it’s worth taking the extra hour or so to go see them.

They’re impressive and it’s the type of landscape that you don’t see in the rest of Nebraska. 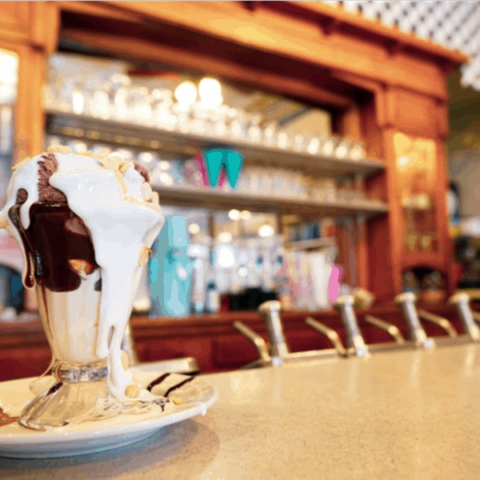 I never seem to time it right when I’m passing by Potter. It’s home to the Tin Roof Sundae and you can get it at The Potter Sundry. Of course, I’m always getting there after-hours, but one day, I’ll have this treat.

If you don’t have time constraints for crossing Nebraska, consider taking the more northern route of Highway 20. It’ll take you through smaller towns and the iconic Sandhills. Here are a few stops along the way. 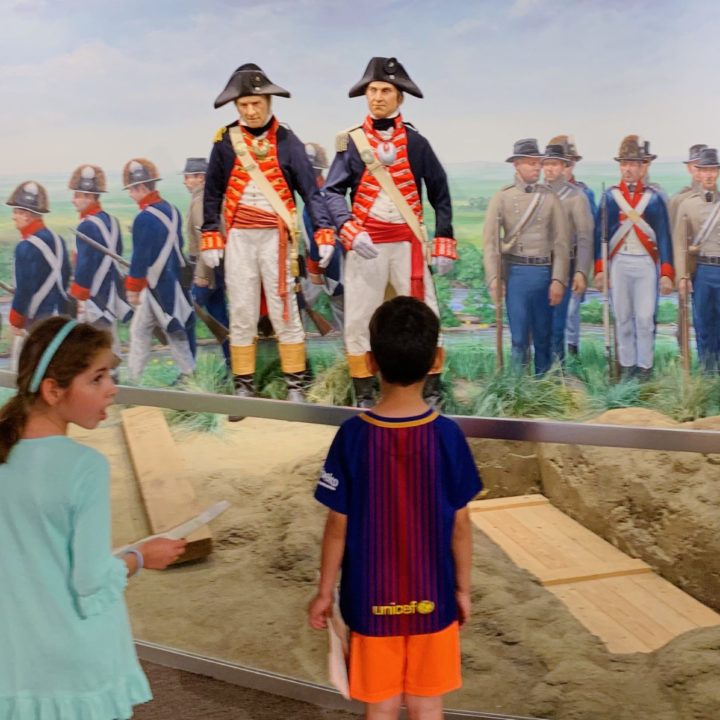 The techincally in Iowa, I'm including a stop in Sioux City because when we drive this route from Omaha to Western Nebraska, we almost always stop there. Besides, South Sioux City is in Nebraska.

For a fairly quick but hands-on and educational experience, visit the interpretive cetner to learn about the region's connection to Lewis & Clark.

If want a shorter stop (for candy), consider visiting Palmer Candy, home to the Twin Bing. One of Nebraska's odder, off-the-beaten path museums, the Klown Doll Museum in Plainview showcases the results of a collection that took more than 50 years to build. 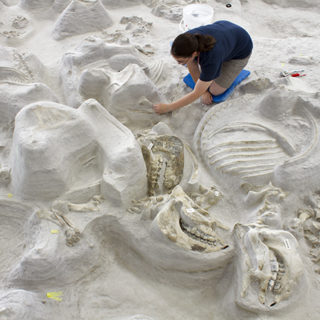 While it's a little ways off the highway, Ashfall is an active fossil dig site that makes the extrta time worth it. The bones of rhinos, three-toed horses, camels, and more are well prepared due to being buried by volcanic ash. 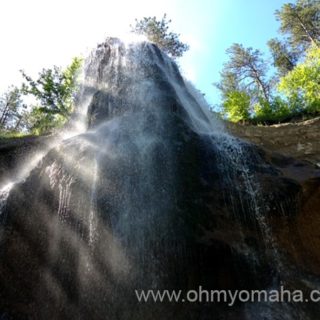 Every summer in my childhood, we made the trek to Valentine to canoe the scenic Niobrara River. We'd always stop at Smith Falls State Park to get pictures of (and pictures in) the waterfall.

A half-day float trip is certainly more than a quick road trip pit stop, though. So, I recommend planning a stop to see Smith Falls, Nebraska's tallest waterfall. 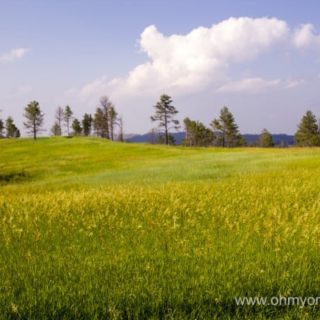 While Chadron is home to the state's first state park (Chadron State Park - pictured), a quick road trip stop I recommend is the Bean Broker. Sure, I'm always up for a coffee stop, but the Bean Broker was an unexpected gem in Chadron that i have to tell everyone about. 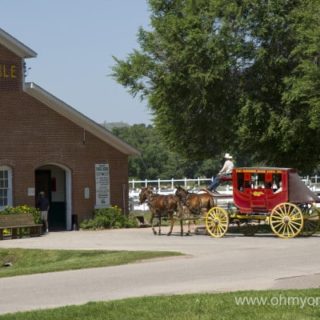 Depending on the time you allow at the park, you can do anything from taking a stagecoach ride to off-road jeep tours, float trips and chuckwagon dinners. The classic experience, though, is a horseback trail ride.

For shorter stops, visit the natural history display and check out the historical buildings.

How far are Nebraska landmarks from the interstate?

But, it’s a sight I recommend not just every Nebraskan see. Everyone passing through Nebraska should see it, if only to start to understand the role the state played in the pioneering history of America.

Still, a visit to Chimney Rock or any of the following landmarks isn’t as easy as a quick exit off the interstate.

Chimney Rock was the most recognizable landmark along the Oregon Trail. It’s located in the Panhandle of Nebraska, which is about 430 miles away. That’s a long drive (just imagine how the pioneers felt).

But let’s say you’re already driving out west along Interstate 80. How long does it take to get to then?

Well, when you reach Ogallala, you will need to take Highway 26/NE 92 westward toward Bayard. The drive is a little more than 103 miles.

As you drive Highway 26, be sure to look for Jail and Courthouse Rocks. They are two additional landmarks that pioneers spotted along their journey.

The Chimney Rock Visitor Center is located 1.5 miles south of Highway 92 on Chimney Rock Road near the town of Bayard. There is no charge to visit, and you can still enjoy the view of Chimney Rock even when the visitor center is closed.

Scotts Bluff National Monument is located in the same region as Chimney Rock, and in fact, you follow the same route for it, as well, if you’re traveling along Interstate 80.

When you turn west onto Highway 26/NE 92 at Ogallala, you’ll drive a little more than 120 miles.

The monument is part of the National Park Service and spans more than 3,000 acres. There is no charge to visit.

The state’s largest waterfall is located in Smith Falls State Park. Being a waterfall and all, it’s not exactly accessible to interstate or highway traffic.

Here’s how to get there: Driving Highway 20, you’ll turn onto Highway 7 North when you reach the town of Bassett. From there, it’s about 24 miles to reach U.S. Highway 183 North. Drive that for 2 miles, and then turn onto NE 12 West for 37 miles. In all, it’s about 63 miles from the main highway.

Where: 23 miles southwest of Valentine on Highway 97

Snake River Falls is considered to be located in Valentine, but it’s considerably southwest of Valentine. To get there, drive Highway 20 into Valentine, and then turn onto NE 97 South for 23 miles until you reach your destination.

It’s a beautiful waterfall, but there are a few things to remember: