Posted on Published: May 12, 2021 Categories Tennesee

25+ Awesome Things To Do In Memphis With Kids 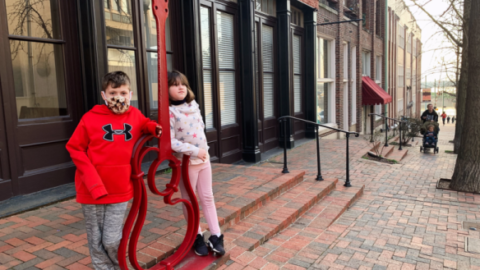 When I first started dreaming up a trip to Memphis with the family, my thoughts went to music and history. I assumed we’d go to museums for blues, rock and roll, and most definitely the National Civil Rights Museum. Alas, a pandemic shifted my focus to mostly outdoor pursuits. And you know what? It was a fun, two-day trip to Memphis!

We’ll be back to see Sun Studios, Stax Museum of American Soul Music, Graceland and all the other epic attractions another time. Don’t you worry.

Disclosure: Our visit was hosted by Memphis Tourism. This post may contain affiliate links. All thoughts, opinions and typos are my own.

When to visit Memphis with kids

If your family is anything like mine, summer is the most convenient time to plan a trip. From everything I’ve heard, summer is not the ideal time to visit Memphis, though. Think: Hot and humid.

We went in early spring, and really lucked out with the weather. It reached 70 degrees in early March. It was perfect. We had sun, a breeze, and zero bugs.

The wonderful Memphis Zoo is consistently ranked among the top in the U.S. It’s one of the few zoos in the states that have pandas, and honestly, the duo captured my whole family’s attention. (We’ve got the Lele and Yaya souvenir panda stuffed animals to prove it).

But, definitely explore beyond the China exhibit. There are wonderfully immersive and well-designed exhibits. A few of our favorites: Northwest Passage and its playful polar bears; Teton Trek with grizzlies and wolves; and Zambezi River Hippo Camp, with a hippo, of course, but also some active crocodiles swimming on the day we were there.

Amount of time: Plan at least three hours to half a day. Get there fairly early or expect a bit of a line to get in.

Fair warning, if you go to the delightful children’s garden first, you may not be able to get your kids to leave to see any other gardens at Memphis Botanic Garden. My Big Backyard, as it’s called, is a spacious place for kids to roam. Playhouses that look like a castle and fun houses, swings, water features, tunnels, and of course, lots of flowers and plants…they’re all there. It really is imaginative and special.

We did manage to talk our kids into leaving the area, but only with the promise/bribe of ice cream. We visited Japanese Garden, which had the nice pond full of koi and a peaceful overall design.

And since it was early spring, we sought out Daffodil Hill. We were there pretty early for flowers in other parts of the gardens, but we enjoyed the visit nonetheless.

Amount of time: At least two hours if you’re only visiting My Big Backyard and another garden or two. Otherwise, tack on two more hours for all the walking around the entire 96 acres.

I was surprised to learn that Shelby Farms Park is one of the largest urban parks in the U.S. (five times larger than Central Park). And it is a sprawling park with a lot to do and see.

Our main activity was a 30-minute horseback ride from Shelby Farm Stables. There are longer options, but 30 minutes was perfect for us. Check availability

The stables are near an epic playground. I made the mistake of telling my kids about it ahead of time, only for us to discover it’s temporarily closed out of an abundance of precaution due to covid. There were some sad kids.

Other activities at the park: Paddle boats (seasonally), biking, hiking, ropes course, hiking…oh, and don’t forget to look for the bison herd. There is a splash area but no swimming allowed at the park.

Amount of time: Depends on your plans. Give yourself a few hours if you’re going to try to do a few things there.

Cheap things to do in Memphis

On our first night in Memphis, the kids and I took a long stroll along the Mississippi Riverfront, along with dozens of other families and dog walkers. It was a busy place! The kids played a bit on the playground by the Beale Street Landing, marveled at the dogs, and gazed at the water.

It’s also pretty close to Mud Island River Park, which I hear is a pretty neat place to explore.

If you happen to be downtown in the evening, be sure to watch for the Mighty Lights, a nightly light show on LED lights on the Hernando de Soto and Harahan bridges.

Amount of time: It depends on your walking pace. I’d say, plan about an hour.

Unique things to do in Memphis

Quite an official thing to see, this ceremonial parade takes place daily at 11 a.m. and 5 p.m. inside the hotel, just as it has since the 1930s. The ducks spend the day swimming in the fountain in the ornate lobby of The Peabody Hotel, and then retire to their cozy penthouse on the roof.

Watching the parade is totally FREE, but show up at least a half-hour early to get a seat. If you can’t snag a table, pick a spot near the elevators, as the ducks waddle along the red carpet on their way to the middle elevator.

For an added experience, you can pay to have your kid(s) be the honorary duck master. It comes with some momentos as well as the honor of helping the duck master herd the ducks along.

Amount of time: The ceremony itself is rather quick, but if you arrive early, plan on spending abut 45 minutes at the hotel.

First thing’s first, yes, it’s a bar on Beale Street. If you’re wondering where you could possibly go with your kids on Beale Street, this is a good choice. Why? Goats! Silky O’Sullivan’s is known for the resident goats in the gorgeous courtyard. It’s a nice little escape from the bustle of Beale Street during the daytime. My daughter was fascinated by the goats and their large goat tower.

Silky is also a restaurant, and kids are welcomed. There’s even a kid’s menu.

More Memphis attractions to see & things to do:

Your turn: I’d love to hear some of your favorite things to do in Memphis – with or without kids!

Next
8 Kansas City Restaurants You Don't Know About But Should
Click here to cancel reply.