Great Restaurants In Downtown Memphis (& Nearby)

Memphis is a city known for a lot of things – blues, soul and rock & roll, Civil Rights moments, barbecue. Ah barbecue. It is a barbecue town. But there’s more than barbecue waiting for you here. Read on for my favorite restaurants, especially downtown Memphis restaurants, and I’ll note which ones were especially loved by my kids (because everyone wants that unicorn of a restaurant that’s both foodie-friendly and family-friendly).

Disclosure: Our trip to Memphis was hosted by Memphis Tourism. I paid for all but one meal. This post may have affiliate links. All thoughts, opinions and typos are my own.

During our recent trip, our Memphis home base was downtown. There is so much to see and do downtown, that I imagine most visitors choose downtown Memphis hotels. Downtown Memphis is right by the Mississippi River, on the western side of the city.

Of course, when traveling with kids, there are particular must-see attractions that aren’t downtown. In the case of Memphis, that includes places like the Memphis Zoo, Memphis Botanic Gardens, and Shelby Park Farms.

So, it’s no wonder we split our time in restaurants downtown and not downtown (I’d write east of downtown, but that’s still pretty vague). I’ve divided up my recommendations into those two categories, and I’ll note what attractions are near (or near-ish) those restaurants.

Before planning your meals, check Groupon to see if any local restaurants have a deal. I didn’t see any great ones before our visit, but maybe you’ll have better luck.

One of our favorite meals in Memphis was our first breakfast. We went to Sunrise Memphis, a restaurant that successfully balanced creative, foodie-appealing food and drinks with budget-friendly prices. I tried the Dirty South Sandwich, with a fried egg and bacon added to it.

It was filling, but not nearly as filling as the Three Amigos Tacos my husband ordered. He also tried the beermosa served there. It was surprisingly good.

There are kid options here, especially the sugar explosion of Oreo pancakes.

Just how famous is Gus’s World Famous Fried Chicken? It was once named by GQ as one of the Top 10 meals in the United States worth flying for, and Rache Ray’s travel show featured them. And I have to admit, this chicken does stand out.

Gus’s now has 30+ locations, but Memphis is where it started, so Memphis is where you should try it. We got ours to-go, and if we’d planned better, we’d have ordered it ahead of time rather than wait for it (it’s a long wait, even on a Monday in the off-season).

What’s the appeal? The golden fried skin is crispy perfection and there’s a spicy kick to it. It took some getting used to for my kids, who hate all things spicy, but they did warm up to it. For sides, I recommend getting the creamy macaroni and cheese.

This location isn’t too far from the Mississippi riverfront, and it’d be a nice place to eat your take-out. They do offer dine-in right now, but it is a small place so there will be a wait.

Yes, Silky O’Sullivan’s is a bar on Beale Street. But, it is also a restaurant and one with a kid’s menu. And more importantly, and the whole reason I wanted to go there, is that it’s a place with a gorgeous outdoor patio…and goats. I was there for the goats.

The goats don’t do much and being Covid and all, there was quite a spacious barrier between us and the goats. But still, it was totally worth the awkwardness of bringing my kids into an Irish bar on Beale Street.

We went between the lunch and dinner hour, when it was pretty tame and quiet. They’re known for their barbecue (being Memphis and all), but we just had some cold drinks and watched goats for a little bit.

One simply doesn’t go to Memphis and not try quintessential Memphis barbecue. Isn’t just not done. Our first encounter with Memphis barbecue was at Central BBQ, at the location that’s just a stone’s throw from the National Civil Rights Museum (you can see the neon Lorraine Motel sign from Central’s entrance).

They’re known for the pulled pork sandwiches, and after trying one, I most definitely encourage you to get it. The brisket is pretty special, too.

The staff at Central BBQ really stood out. Everyone was friendly and calm even when it seemed incredibly busy. There was a line out the door with one hour left to closing time. Expect a wait, and expect it to be totally worth it.

This is also one of the 100% kid-approved restaurants of Memphis. There wasn’t a single complaint. I bet the chocolate chip cookie that comes with the kid’s meals helped.

If you read that the “best burgers” in a city is a few blocks from your hotel, you go check it out, right? I heard only good things about Huey’s, and it was a 5-minute walk from our hotel, so we opted for a quick take-out on final night in Memphis. It was a good call!

Their “world famous” cheeseburger was grilled to perfection and giant. I couldn’t finish my tots that I’d ordered with it.

The kid’s menu had the standard offerings, and my kids were pretty content with their dinners. I’d say, overall, it was a win win.

If you choose to dine in, know that it’s got a total pre-game bar feel to it. I thought it was fun and had plenty to look at, but if a bar isn’t your family’s scene, just stick to takeout.

Address: Huey’s,  77 S. Second St.; there are eight other locations

It isn’t a family trip without at least one pizza stop for us. We opted for take-out from Aldo’s Pizza Pies, which was a short walk from our downtown hotel. They serve up New York-style pizza, and I recommend calling ahead to order to-go, rather than showing up and waiting, like we did.

There’s a nice variety of specialty pizzas. My kids scarfed down their pepperoni, but if you’re feeling adventurous, get yourself the Memphis BBQ pizza.

Great restaurants that are not in downtown Memphis

If you’re headed to the Memphis Zoo, Cafe Eclectic is just down the street from it. We tried this lovely cafe one morning, opting for outside seating in the sunshine. It’s not the most scenic area to be, but it works just fine.

The food was delicious, especially the Sunny Side Hash I got, that was a mix of russet and sweet potato hash. And, more importantly, the coffee was divine.

Surprisingly, my kids did not like the dishes they chose. But, of course, they loved the brioche cinnamon roll. It was pretty tasty, and so large, I recommend sharing it.

Bear with me here. Tucked beside a very busy Lowe’s parking lot is a non-descript little building serving up some incredibly tasty barbecue. When I was researching Memphis food, Elwood’s Shack continually came up, and I can see how it’s popular. There were construction workers, suits, and families there.

I recommend the brisket taco, which was what my husband ordered. I wasn’t terribly hungry, so I got some smoked chicken on a salad.

The kids? They weren’t big fans of the place. Their loss.

By the way, the original plan was to get breakfast here on our way to Memphis Botanic Gardens. I’d heard their breakfast was superb. If you go for breakfast, let me know how it is!

Traveling during covid has had many challenges, the least of which being many locally-owned restaurants and shops have the oddest hours. We had a hard time finding a non-chain ice cream shop open during our visit. My original plan was to go to A. Schwab’s on Beale Street.

But the hours didn’t work out. I’d read rave reviews about La Michoacana, though, and I thought we could give it a try. They’re more known for their paletas (Mexican popsicles with some pretty funky flavors), but we were in the mood for ice cream. They have some pretty Instagrammable food there.

I got a Ferrrer Rocher flavored cup of ice cream that was creamy and delicious.

The downside to this place was the location. It has more of a local feel to it, than a tourist destination. Which may be a good thing in your book. Alas, when we were there and hoping to sit outside to enjoy our treat, we had a lone man sitting in the booth next to us with a bottle of bourbon from the liquor store next door.

Q. What food is Memphis known for?

A. If you go to Memphis, you have to get barbecue. I think it’s a rule (maybe not, you be the judge on the Memphis Travel restaurant page). There are about 100 places to choose from.

And once you’ve had your fill of barbecue, move on to trying some Memphis soul food.

A. Barbecue experts will tell you Memphis is known for three things: Pork ribs (dry or wet), pulled pork, and putting pulled barbecue in or on everything.

And lastly, there’s the barbecue on everything bit. When we visited, we had pulled pork served on our pizza at Aldo’s. My parents (fondly?) recall having pulled pork on their spaghetti when they visited. 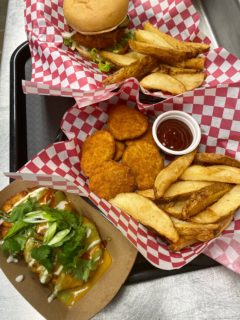 Previous
10 Des Moines Restaurants That You Don't Know About But Should
Next
11 Quirky Bars & Unique Restaurants In Kansas City
Click here to cancel reply.