Posted on Published: June 16, 2020 Categories Where To Eat In Omaha

8 Amazing BBQ Joints To Try In The Omaha Metro 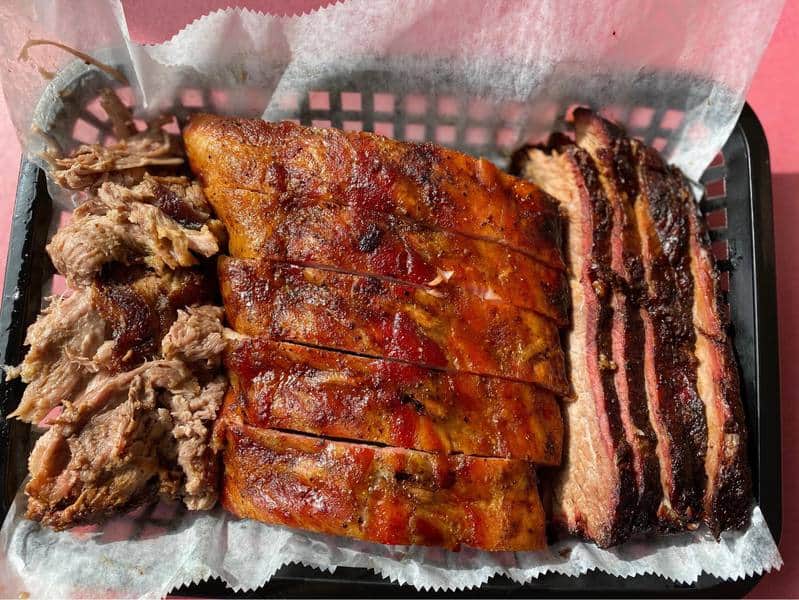 Long known as a steak town, Omaha’s barbecue scene has stepped up its game with some new joints opening, as well as veteran favorites. From Hartland BBQ in Benson to new West Omaha fave Porky Butt’s, pitmasters are really working to outdo one another. The question is no longer, does Omaha have good barbecue, but where should we eat? Here’s a fun look at some of the best local BBQ joints calling the Metro home.

Blaine Hunter earned his barbecue stripes as a youngster, growing up in the world of Texas pit barbecue. Having competed in more than 130 competitions, Hunter has earned 85 Top 10 finishes, including 22 grand championships. Bringing a championship resume to the Omaha barbecue scene, Porky Butts was an instant hit with Omaha foodies when they opened their doors in 2019.

Your mouth will water as soon as you pull up into the West Omaha eatery’s parking lot. The smell of smoked meat and all the fixings is more than enough to make you want to throw on a bib and go to town on ribs, brisket and pulled pork, among other menu items.

A favorite with diners, the rib plate features mouthwatering smoked ribs along with two sides, such as smoked beans, mac and cheese, loaded grits, and more, plus cornbread.

Family-owned, Smoking Jay’s has called Omaha home since 2015. Not far from Henry Doorly Zoo and Aquarium, Lauritzen Gardens, and downtown Omaha, Smoking Jay’s BBQ thrives on its smoked pork and beef ribs, as well as brisket and gizzards.

You can combine the best of barbecue with Omaha’s love for beef by ordering the Heart Attack Burger, a cheeseburger topped with pulled pork, a slathering of barbecue sauce, and homemade onion rings. Check out their smoked chicken wings as an appetizer.

One of Omaha’s older barbecue joints, Hartland Bar-b-Que is a Benson staple. Located in a small building, Hartland BBQ is known for its smoked ribs. Its barbecue sauce is tangy without a lot of sweetness.

It’s been a family favorite for a few years, and continues to be one of the go-to barbecue restaurants in the Metro.

Joining the ribs are pork, brisket, and sausage, which can be enjoyed as part of a two-meat dinner. Sides include baked beans, coleslaw, and creamy cucumber salad.

Taking over vacant restaurant space at the Best Western hotel in southwest Omaha in 2017, Tired Texan BBQ quickly established itself as a player among Omaha’s barbecue scene, often running out of meat before closing time.

How does an Alabama native choose the name Tired Texan BBQ, and especially in Omaha? The original Texan joint called Birmingham home. The owners honored the original Tired Texan after he passed by choosing the name for the Omaha eatery.

With smoked meats, such as St. Louis spare ribs, pork, and brisket, you’ll want to order a two-meat combination (though single meats and build your own plate options are available). Add sides such as baked mac and cheese, smoked potato salad, creamed corn, and coleslaw that is dressed to your preference (creamy, tangy vinegar, peppercorn, or poppyseed).

Taking over an award-winning barbecue restaurant, a group of friends decided it would be fun to own their own restaurant. With the original Swine Dining BBQ location on Mission Avenue, they serve up excellent barbecue, including smoked ribs and chicken, as well as sandwiches such as pulled pork, brisket, and smoked sausage.

Try their All in the Pool sandwich, consisting of pulled pork, smoked sausage, and brisket. Add a side of smoked beans, potato salad, coleslaw, and corn of the day – corn mixed with peppers, onion, and sausage or cream corn with jalapeno – and you’re set for a delicious BBQ outing.

With the success of the Bellevue location, Swine Dining opened a second location near 120th and Dodge.

Open for more than 15 years, Boyd and Charlie’s has been a stalwart in downtown Elkhorn. Serving up barbecue that keeps people coming back, the family-owned restaurant features a tasty menu, including chopped pork, hickory-smoked sausage, mesquite-smoked ribs, brisket, and honey-smoked turkey.

You can also grab an order of burnt ends, as well as sandwiches with all the smoked favorites, including homemade chicken salad. With sides such as beans featuring smoked meat and sauce, corn casserole, and creamy coleslaw, you’re set for a great meal.

A North Omaha staple since 1967, Jim’s Rib Haven has been a local favorite for great barbecue.

Fans can enjoy beef ribs, spare ribs, and rib tips among other favorites, such as link sandwiches, chicken sandwiches, and the ultimate sandwich combo of beef, pork, and turkey. Jim’s serves the standard sides, including baked beans and coleslaw.

Try an appetizer, such as poppers, saucy fries, or chili fries.

When you’ve been in business for nearly 15 years, you must be doing something right. At Boxer Barbecue in Council Bluffs, that involves making everything from scratch. From BBQ nachos as an appetizer to barbecue spare ribs, baby back ribs, and pork shanks, you’re in for a real down-home treat when you visit Boxer Barbecue.

Combine any of their meats in a two- or three-meat combination plate and add two delicious sides. The sides seemingly could be a meal themselves, with the baked beans including an ample serving of pork, Carolina-style creamy coleslaw, and potato salad that starts with a creamy sour cream base and adds skin-on red potatoes and smoky bacon.

Omaha may not be Kansas City when it comes to barbecue, but our culinary landscape has improved with some new BBQ joints joining the veterans. So, tie on a bib or bring plenty of hand wipes, because you’ll want to get messy enjoying some Omaha barbecue.

I polled readers recently on which is their preferred barbecue joint in the Omaha area and the results were not too surprising given this list:

If you know of a great barbecue restaurant in the Omaha area that wasn’t mentioned in this post (for example, barbecue food trucks), please leave a comment and let all of us know about it! 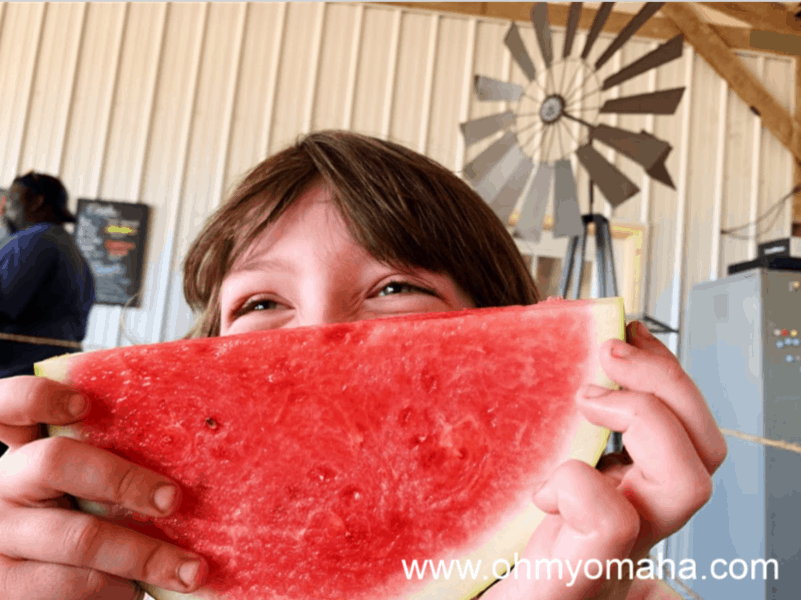 Previous
Looking For A Farm Near Omaha? Check Out Nelson Produce Farm 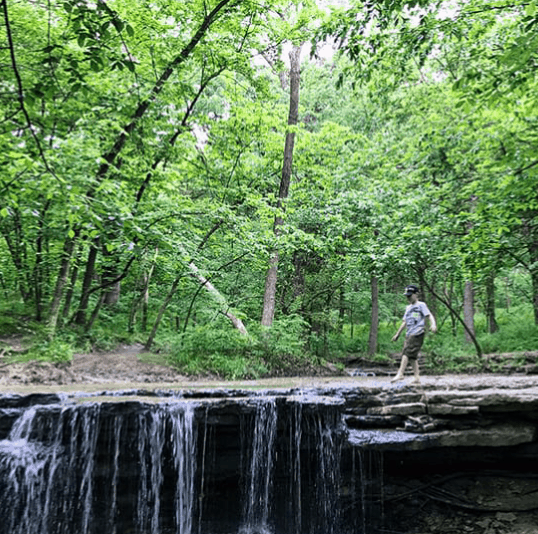 Next
14 Amazing Nebraska Road Trips For The Summer
Click here to cancel reply.

While all listed are good. Smoking Barrels needs to be at the top of this list.

Are you kidding? That brisket was so dry. If I have smoked brisket I want it succulent and juicy and a bit fatty. Needless to say I have not found any in Omaha. Can't wait to go back to Texas. Sorry.

I've got to hand it to Cubby's, they do have some surprisingly great food. I've actually been to a wine tasting there.

Tattoo Bob's BBQ in Omaha has the best BBQ in the City. He has a big yellow food trailer. Seriously... Best and it's not even close

North of Omaha, serving Blair, Arlington, tekamah... is a humble little bbq truck @smokeonarrival . The brisket is good. But the pulled pork and the ribs will have you making involuntary noises of yum. They're on fb and Twitter.