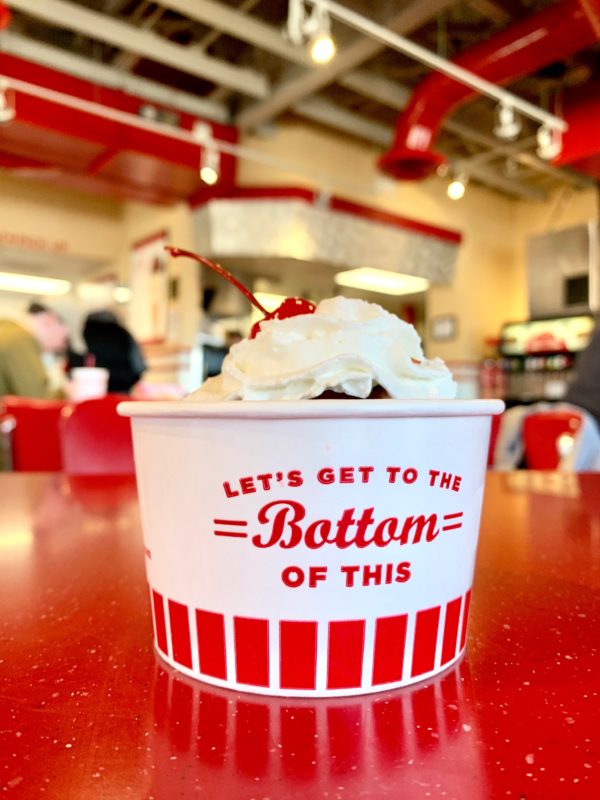 On a recent spring afternoon, my kids and I headed to Freddy’s Custard & Steakburgers in Papillion, Neb., for a treat. We had just finished two soccer games and were planning a walk around the trails at Walnut Creek Recreation Area. For a quick but satisfying lunch, this was a great restaurant in Papillion to head to!

Disclosure: This post is sponsored by Freddy’s Custard & Steakburgers. All thoughts, opinions and typos are my own.

What should you order at Freddy’s?

Having only been to Freddy’s one other time to write about it as a cub reporter at The Daily Nonpareil, I wasn’t quite sure what to order. So, I chatted with Mary Seretta, to get the scoop on what’s popular at the restaurant.

Freddy’s was started by a guy name Freddy (surprise!), who opened up his first restaurant in Kansas with the idea of serving up down home food.

The burger that started it all the double steakburger. Unique to Freddy’s is the flat patty that makes up the steakburger. If you haven’t had one, they’ve got a crispy edge that makes them pretty unique.

At the Papillion location of Freddy’s, the bacon and cheese double steakburger and patty melt are more popular in than the original. Being a newbie to Freddy’s, I went with the original. Everything is cooked to order. See the full menu here.

Related post: Find more places to get the best hamburgers in the city (and steak…this is Omaha, after all) in this post.

I had fries with my burger (of course), and Freddy’s just might have the best ones in the business. These thin, almost shoestring thin, fries are perfectly seasoned. Freddy’s has two fry sauces in addition to ketchup, and you should try them. The jalapeno version wasn’t spicy, surprisingly.

And then there’s the custard. There are a variety of specialties to choose from, as well as sundaes, shakes and concretes (which has the toppings blended in). Or you can order your own creation – there are about 30 toppings to choose from.

I ordered the mint Oreo concrete, which was a delicious treat. The custard is a lot creamier and richer than ice cream I’m used to.

What kids can eat at Freddy’s?

There is a kid’s menu available at Freddy’s, which includes the entrée, fries and drink. One of my kids ordered chicken fingers and the other had a steakburger, which was a pretty generous serving for a kiddo. Glad he was hungry!

They both opted for Dirt ‘N Worms sundae, a tasty treat with vanilla ice cream, cookie crumbles and gummie worms, topped with whipped cream and a cherry.

And, I’ll confess, we also tried the brownie sundae. The chocolate ice cream is a rich chocolate that I loved.

Tip: If you have dogs with you, Freddy’s has a “pup cup” available to order! These small servings of custard make nice treats for the pups.

Freddy’s has a cool retro look to it, with red throughout. It’s got a pretty nostalgic feel to it.

You’ll find black and white pictures of the real Freddy throughout the Papillion location. Freddy was a Vietnam vet, and it’s interesting reading the captions of the photos to learn more about his history and travels.

Freddy’s is a restaurant chain that involves itself in the local community of each location. This particular Freddy’s, which is right be Shadow Lake Towne Center, participates in a variety of fundraisers, especially for schools. They offer up to a generous 30% donation on profits for fundraising nights. On the day we visited, Mary told me about the effort the restaurant had made to raise money for the Red Cross to support Nebraska flood victims.

What’s near this restaurant in Papillion?

The big draw to the area is Shadow Lake Towne Center, where the Freddy’s Papillion location is located. This is a great outdoor shopping center with a mix of national brands and local stores like Michaels, Bath & Body Works, Chocolatier Stam and Nebraska Brewing Co.

If you head east on Highway 370, you’ll hit two favorite places of mine. The first, is Walnut Creek Recreation Area, which consists of a large lake, a playground, and paved and dirt bike trails.

The other place worth mentioning is Sumtur Amphitheater, which hosts outdoor concerts and has a great lineup of free, family-friendly movies each summer.

1 thought on “Nostalgic Restaurant In Papillion”