Editor’s Note: If you’re visiting this page in 2018, you’re probably looking for information on “Disney’s Newsies” at The Rose June 1-17, 2018. Head over to my post with a roundup of Family-Friendly Things To Do In Omaha. I have “Newsies” 2018 performance details there. Thanks!

In celebration of “Disney’s Newsies” opening Tuesday in Omaha at the Orpheum Theater, I’m giving you my 10 favorite fun facts about the show.

I’m no Fansie, but I’ve been waiting for this show to open since seeing a sneak peek of the show during Omaha Performing Arts’ season announce last year.

Omaha Performing Arts presents “Disney’s Newsies” as part of its Broadway Series. I’m no longer an employee there, but they have invited me to tell you all about the show and have compensated me with complimentary tickets (so I can keep telling you about it next week).

So, before we jump into the facts, I’ll start by saying you have never seen choreography like you’ll see in this show. I’ve been to dozens of Broadway musicals throughout my career and the “Newsies” preview was a showstopper. I can’t wait to see the full show on Tuesday!

It’s a Disney production so you can feel comfortable about the content – but what will draw them in is the exciting choreography! However, note that it is a full-length musical (so pretty long for really young children). I’d recommend ages 8 and older, but you know your child best. 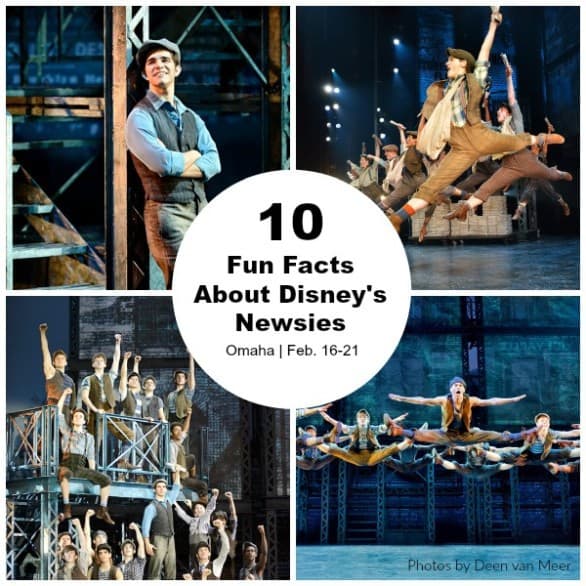 10. “Newsies” is inspired by the real-life “Newsboy Strike of 1899,” which began when newspaper publishers raised the price for newsies, charging a dime more per hundred papers. The strike was led by a charismatic young newsboy Kid Blink, who rallied orphan and runaway newsies on a two-week-long action against Pulitzer, Hearst and other powerful newspaper publishers. Pulitzer did finally concede and agree to the exact deal that Harvey Fierstein’s book dramatizes. As a result, not only were the boys considerably better off, it was in many ways the beginning of child labor movement.

8.The Broadway production was originally scheduled for limited 12-week run of 105 performances, however, due to popular demand, “Newsies” went on to run for 1,005 performances.

7. During the song “Seize the Day,” the 16 newspapers that feature in the dance break are torn in advance to separate down the middle easily and consistently. There are 42 sheets of paper danced on or torn during the riot sequence each night. These single-use sheets are either recycled or given to audience members during the performance.

6. For the song “King of New York,” the newsboys each have two pairs of identical shoes—one for the majority of the performance, and a pair for this number with taps attached. There are five microphones lining the edge of the stage, with three additional microphones attached to the Deli tables, so that all of the tap dancing is heard.

5. The antique Chandler & Price printing press used in the show was manufactured in the early 1900s and is 1,200 pounds of solid steel. It is fully capable of printing, and an expert printer, who specializes in vintage machines, was brought in to train staff and actors in its intricate workings.

4. The three-level set rises over 24 feet high and features three completely automated towers. The three towers move 40 times, traveling a cumulative 676.5 feet per performance, or more than 47 miles a year.

3. There are approximately 150 newspapers used every performance, specifically printed with the headline “Trolley Strike Enters Third Week.” These papers are carefully cared for, to avoid tearing, so they can be used for multiple performances.

2. Jess Goldstein has designed 150 costumes to evoke the NYC populace of 1899, from the poorest newsies to the richest publishing titan. The actor with the most costume changes plays seven characters, including a cop, Nunzio the barber, a photographer and Governor Roosevelt. The fastest full-body quick change is the character of Darcy switching to the “Newsies” character Jo Jo during “Carrying the Banner.” The change is 56 seconds and requires two dressers to assist.

1. “Newsies” was nominated for 23 major theatrical awards, and won many big ones, including two Tony® Awards (Best Choreography and Best Original Score)

Tip: Save on ticketing fees by going to the box office inside the Holland Performing Arts Center, 1200 Douglas St. Your best chance at getting a great seat would be to consider weeknight performances.

That would make an interesting post, comparing the book to the musical.