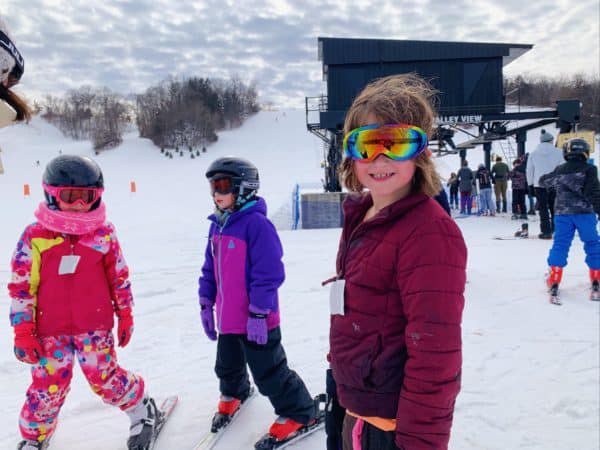 I wanted a winter ski trip but I didn’t have time to go too far away from Omaha. Plus, my kids were absolute beginners and I didn’t want to spend too much money at some mountain resort where they may not leave the bunny hill. Our best option ended up being in Iowa: Seven Oaks Recreation in Boone. Read on to see what our weekend was like!

Disclosure: We were hosted by Seven Oaks Recreation. All thoughts, opinions and typos are my own.

What to expect at Seven Oaks Recreation

Seven Oaks Recreation is a few miles outside of Boone, a small town in Central Iowa. It’s right off U.S. Highway 30, so it’s pretty easy to find.

The funny thing about Seven Oaks is that for most of your drive, you are wondering to yourself “How on earth can there be skiing in the middle of these fields?” And then, out of seemingly nowhere, you see the slopes rising.

It’s not a mountain range by any stretch of the imagination (it is Iowa, after all). But the terrain is hilly enough for 11 ski and snowboard trails.

The trails are short runs, but for the beginners in our group, they were the right length. There are two ski lifts that seat three people, as well as two surface lifts.

The trails are well marked, and like I said, short, so it was difficult to take a wrong turn and end up on a difficult course. I also felt comfortable enough to let the kids ski ahead while I stayed back to help whoever fell the most recently.

One thing I want to point out was that the staff at Seven Oaks Recreation was extremely helpful, for the most part. The kind people running the free beginner ski lessons were patient and alert. And from the first aid skiers on the slopes to the chairlift operators, we encountered the Midwestern attitude of friendliness.

Our only hangup was near the end of our day, when we tried to buy tubing passes for the six kids in our group. Snow tubing is very popular at Seven Oaks and they have to regulate how many people are on the tube slope at at time. Unfortunately, that meant they were only going to let five more people on the slope at that time.

After a few minutes of pleading and bargaining, the moms in our group managed to talk the lady into allowing three kids to go for a half-hour and then the other three to go for the second half-hour. So, it all worked out in the end.

When is the ski season at Seven Oaks?

The Seven Oaks Recreation skiing and snowboarding season runs from December to mid-March. Because Midwest weather can be fairly unpredictable, Seven Oaks has snow-making machines to ensure snow is always on the slopes.

How much does it cost

The price is the great thing about Seven Oaks. If you’ve ever skied, you know how things can add up. You need a ski lift ticket, you may need to rent skis and boots, you may need to buy food.

At Seven Oaks, the price for a kid’s ski lift plus rental gear (skis, poles, boots) was $50. Add a helmet rental for $8 and an hour of tubing for another $5… and the total cost was $63. It’s a bit more for adults, but not too much more.

As with a lot of seasonal attractions, prices can change depending on when you go, and there is a lower rate if you plan on skiing in the evening.

There are small lockers to store personal belongings. Bring quarters for one.

Are there ski lessons?

Yes! Seven Oaks Recreation has free beginner snowboard and ski lessons. They last about 30 minutes or however long it takes for you to feel comfortable on the slope without an instructor in front of you.

We took advantage of this and my kiddos learned how to fall and get back up, and how to slow themselves down on the slopes. While they didn’t learn all that they should know before flying down a mountain, they were prepared enough to survive.

I liked how the instructors took the time to help each individual, sometimes skiing backward in front of the beginner to guide them.

There is also the option to purchase private lessons.

What else can you do at Seven Oaks in the winter?

I never mentioned that there is snowboarding at Seven Oaks, but I think that kinda goes without saying, right? I’m not a snowboarder so it’s not even on my radar. But there were a few slick courses just for snowboarders.

I never mentioned that there is snowboarding at Seven Oaks, but I think that kinda goes without saying, right? I’m not a snowboarder so it’s not even on my radar. But there were a few slick courses just for snowboarders.

The other draw to Seven Oaks is the tubing park. It was certainly a big hit with our kids. You pay by the hour and the nice thing about Seven Oaks is that there is a surface lift to drag you and your tube up to the top of the hill.

Tip: Avoid a long wait for the tubes and/or not even getting a chance to tube by opting to snow tube first thing when you arrive to Seven Oaks Recreation.

Is there a restaurant at Seven Oaks?

Inside the lodge, you can find Snow Joe’s, a fast food counter to buy food like  sandwiches, fries, pizza, and cookies, as well as soft drinks and hot chocolate.

Patrons are allowed to bring in picnic-type food as long as you’re not bringing in crockpots or food from a competing restaurant. We opted to bring our lunch and a cooler of drinks and dined outdoors because it was a wonderfully warm winter day when we were there.

At the end of the day, we bought snacks for the kids and hot cocoa at Snow Joe’s.

There really isn’t an off-season, as there are activities in the summer and fall, as well. I’m looking forward to returning someday (some warm, summer day) and doing one of the river floats on the Des Moines River. From May through October, Seven Oaks offers full-service canoeing, kayaking and river tubing.

Where to stay near Boone, Iowa

There are a few lodging options in Boone, including a couple that have partnered with Seven Oaks Recreation for a ski and stay package.

We were traveling with a group and one family had stayed at Hotel Pattee in the past and highly recommended we all stay there for the ski trip. It was a great choice! Hotel Pattee is located in Perry, about a 30-minute drive from Seven Oaks Recreation.

If you go to Boone later in the year, when the weather’s warmer, look into a steam train ride on the Boone & Scenic Valley Railroad.