Guide To Okoboji In The Summer With Kids 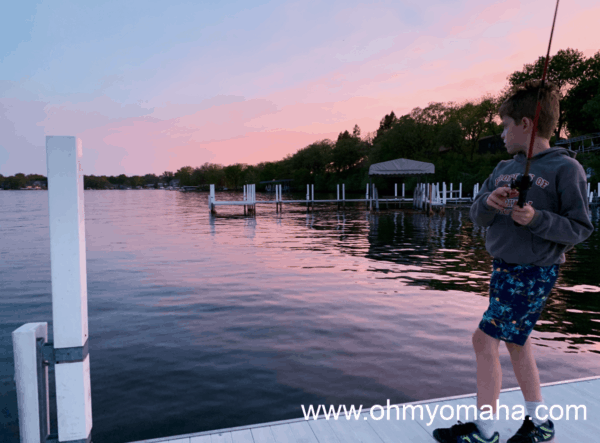 Okoboji is one of Iowa’s biggest tourist magnets each summer, with its glacier-carved lakes being the main attractions. Built around the lakes are summer staples like a historic amusement park, waterside bars and restaurants, and a ton of kid-friendly activities. It’s the perfect Midwestern summer destination.

We had a lot to see and do and only three days to do it. (I’d recommend adding an extra day or two to fit it all in at an enjoyable pace.) Want to visit? Here’s my guide to visiting Okoboji in the summer with kids.

Disclosure: Our trip to Okoboji was hosted by Vacation Okoboji. All thoughts, opinions and typos are my own.

First off, let’s talk about how Okoboji is more than a single city (though there is the city of Okoboji). When I started planning a trip to Okoboji, I was looking at a map of Iowa, trying to figure out where exactly I should be staying to get the “Okoboji” experience. Turns out, it’s not that simple.

Okoboji is a region in northern Iowa and consists of several towns on the edge of the Iowa Great Lakes. Pretty much, you’re in “Okoboji” if you stay somewhere along the lakes of West Okoboji, East Okoboji, Upper Gar, Lower Gar, Minnewashta, and the largest natural lake in Iowa, Spirit Lake. Most of the lakes, except Spirit Lake, are interconnected.

For our trip, our lodging (Crescent Beach Family Resort) was in Wahpeton. It was on West Okoboji Lake, which is a pretty blue, spring-fed lake. Depending on your preference, you can stay within walking distance of a lot of attractions or find a place a little outside of the hubbub.

By far, the lakes are the draw for this region, so you’ll likely spend a lot of time out on the water or near it. I paddled the lake with the kids during our stay, since our hotel allowed free use of their equipment. Our hotel also had standup paddleboards and paddleboats.

You’ll find places to rent speed boats and pontoons around the region, plus places that will do parasailing.

The Queen II is a famous boat excursion that leaves from Arnolds Park Amusement Park. It’s about an hour long. My kids were impressed with the boat and excited to ride it…for about 5 minutes. I bought some snacks and got another complaint-free 10 minutes out of them. After that, they were not interested in the narration and the remaining 45 minutes were long.

On shore, there are several beaches to play in, including a pretty popular one right by historic Arnolds Park Amusement Park. Our hotel had a private one that my kids enjoyed. Public beaches include:

Fishing is another big thing to do in Okoboji, by boat and by land. We didn’t seek out any special fishing holes, and instead, just enjoyed being steps from our hotel room and fishing.

More things to do outdoors in Okoboji in the summer

You can’t write about Okoboji and kids and not talk about Arnolds Park Amusement Park. This historic amusement park was a hit with my kids. We went at the start of the season and enjoyed no lines on some of the biggest attractions, including The Legend, the 13th oldest wooden rollercoaster in the U.S.

Tip: Get the all-day pass for your kids if they’re in grade school or older. My kids loved riding the same favorite rides over and over again, and paying for each ride would’ve racked up a high price otherwise. They particularly loved the Rock-O-Plane, which they stayed on for three rides in a row (the perk of going early in the season!).

Outside Arnolds Park Amusement Park is Harmony Park, a small grass patch in a shopping area with musical instruments to play. It’s a low-key place in the shade, and just right for a break from rides.

If you’ve got bikes, bring them! I found the Okoboji region to be incredibly bike-friendly, with miles of bike path to get you to various attractions. With the kids, we traveled from Dickinson County Nature Center the short distance to Pearson Lakes Art Center, and then onward to Tweeters. That route was really easy for all abilities between the first two stops. Between the art center and Tweeters, though, you’ll cross Highway 71 twice at crosswalk, and end with a brief stint on a sidewalk. Not ideal, but it was fine for our kids to manage.

Our hotel had a large, old playground on property that my kids got to enjoy for a hot minute. If we had an additional day there, I think we’d have carved out more time to play there and probably did a round of putt putt (free at the hotel).

We missed quite a few activities that my kids were hoping to do, actually, including putt putt golf at Treasure Village and the go carts at Arnolds Park Amusement Park.

The weather isn’t always going to be sunny and blue skies. We found that out on our third day when it was pouring buckets. One of our favorite indoor stops was free: The Dickinson County Nature Center. It has a lot of hands-on activities for kids, including a neat sand table. My kids love animals, so they enjoyed looking at the displays and playing the activities at many of them.

The nature center had a large honeycomb to climb through. It entertained the kids for a good 30 minutes.

Tip: If isn’t raining, don’t miss the outdoor nature playscape at Dickinson County Nature Center. There are things to climb on, a tunnel to crawl through, and a sandbox.

The Pearson Lakes Art Center is another free option for families. If you’ve got young kids, head downstairs to the ArtSMART room. My kids loved playing with the blocks and putting on a short play with the costumes.

Don’t leave without seeing the art center’s collection of Russian Impressionist art. This was a hidden gem that you’ll be surprised to find. It’s the second largest collection outside of Russia, and it’s impressive (if you love Impressionism).

The Iowa Great Lakes Maritime Museum, located outside Arnolds Park Amusement Park, is also free. While the maritime portion may or may not appeal to the little ones, you’ll want to go in anyway because it’s home to old amusement park items like the giant wooden slide from olden days at Arnolds Park Amusement Park (I believe, technically, it’s in the Arnolds Park Funhouse Museum). If you have a day pass to the amusement park, you can go down it repeatedly, which my kids did. You can also pay a couple dollars to slide down it if you don’t have the day pass.

It’s a tall slide and looks pretty intimidating at the top, but it’s not nearly as fast as you think it would be. It was totally manageable for my 7-year-old, at least.

Okoboji Classic Cars is part museum, part art gallery, and 100% designed to appeal to car fanatics. It’s a little pricey, and you have to take the tour, which could be a disaster with an uninterested kid. Still, even I was impressed with the collection and I’m only mildly interested in cars. Kids are given a scavenger hunt to complete during the tour, which was enough to please my kids.

Arnolds Perk Coffee House was my favorite place for breakfast, just because the coffee was so good, and the power breakfast sandwich was filling and delicious. I rarely go to a restaurant twice on a trip, but we did visit Arnolds Perk twice. It’s also just a charming place to sit and relax.

Another good option is O’Farrell Sisters, just get there early to avoid a wait.

The most friendly service we had was during the lunch hour at Tweeter’s Bar & Grill. The menu if huge – burgers, salads, Mexican, etc. They have a kid’s menu.

While we didn’t eat at Barefoot Bar, I’d say it’s pretty kid-friendly. This famous spot on the lake is the famously “no shoes, no shirt, no problem” kind of place. I loved the atmosphere, with the grass-thatched huts and palm trees, but was a little peeved that they’d charge $2.50 for water. After that, I decided not to even check the price of pizza.

Bob’s in Arnolds Park is a popular spot for families who are spending the day at Arnolds Park Amusement Park. We went on a Sunday and the wait was very long. Luckily, there’s a beach right in front of the restaurant, so the kids were kept occupied.

For dinner, we found most places had a long wait, so go prepared to keep your littles occupied. The best pizza we had was the BBQ Chicken at Pub 19 Bar & Grill, a restaurant situated on a golf course.

We also had dinner at Snappers Turtle Bay Cafe, which was a short walk from Barefoot Bar. To keep the kids occupied here, there are a few yard games set up on Astroturf. It did the job.

There are surprisingly few places to get ice cream or treats in Okoboji, at least in the areas we visited. Nutty Bar Stand is pretty iconic for the area, so we had some Nutty Bars during a break from Arnolds Park Amusement Park.

It’s right outside the front of the park. Service was quick. A Nutty Bar is pretty much a cube of vanilla ice cream, dipped in chocolate and rolled in peanuts. You can get cones there, as well.

Want to plan an Okoboji trip for your family? I’ll go into details of some of our favorite things in Okoboji in these upcoming posts:

Best restaurants for families in Okoboji

Okoboji has been on my bucket list for years. Read this Iowa bucket list post to get inspiration to round out planning a trip to the Hawkeye State.

Want Iowa travel inspiration that’s less bucket list and more realistic for a family? We spent about a week exploring central Iowa, riding a train, staying in a yurt and playing in lakes during what I call the Great Iowa Road Trip.

Subscribe to the FREE twice a month(ish) e-newsletter sharing what’s new in Omaha, family travel ideas, giveaways, and more! If you subscribe now, you receive a FREE guide to family dining in Omaha! Subscribe here. 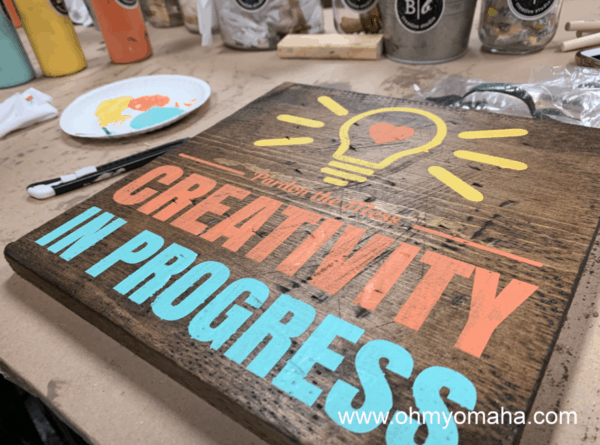 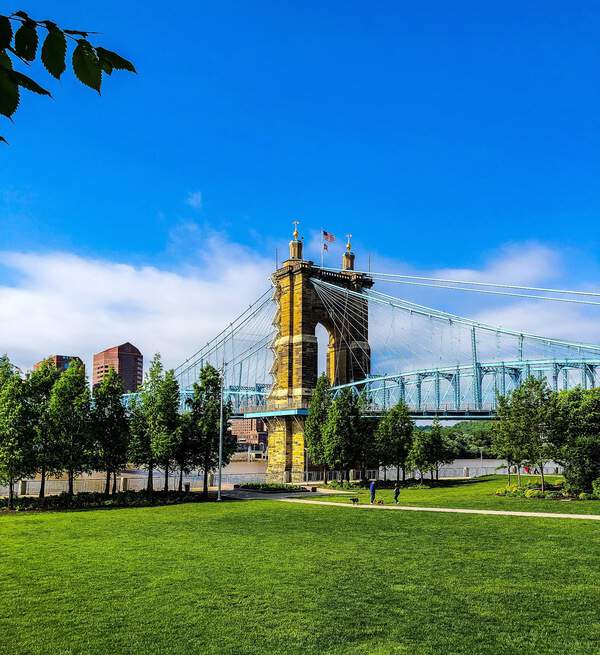 Next
Guide To Cincinnati With Kids
Click here to cancel reply.

Just what I was looking for, thank you for posting.