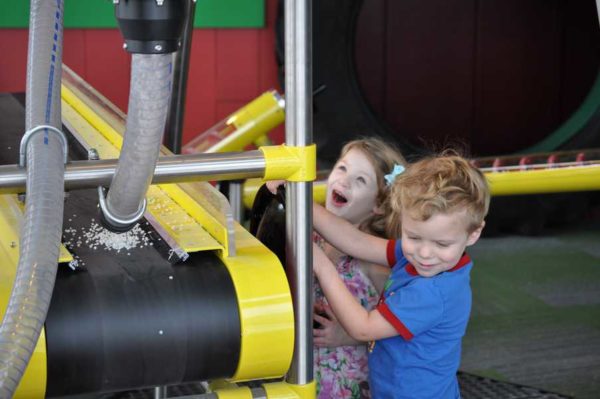 Kim’s note: This is a guest post written by Sioux City local and Oh My! Omaha friend, Lindsay. I asked her to write a local’s guide to Sioux City (and Siouxland, which encompasses the Big Sioux River drainage basin in Iowa, Nebraska, South Dakota and Minnesota). She didn’t disappoint!

If you’re like an Omaha version of me, you probably come to Sioux City, Iowa, occasionally, but stick to what to you know. Well, I’m ready to fill you in on our local favorites! Here are my top picks for where to eat, where to play, and what to bring home if you are in Sioux City for a day. You can’t actually do all of them in one day, but you can mix-and-match your favorites to make a perfect day trip to Sioux City for your family!

Where to eat in Sioux City

Breakfast: Jitters in downtown Sioux City makes the best cake donuts in Siouxland, and they are my top recommendation for a Sioux City breakfast. It made the list of Midwest Best Donuts.

Sunkist Bakery in Morningside (or on Hamilton Boulevard) delights with a wider variety of donuts including yeasted and jam- or custard-filled types. For healthier fare, try to track down the Heartland Coffee and Nosh food truck for one of their breakfast bowls and some lavender lemonade!

Lunch: La Juanita looks like a typical hole-in-the-wall taqueria, but you’ll be blown away by the award-winning flavor of their tacos, burritos (which have been rated as amongst America’s “most life-changing”) and other delicious fare.

Or drive through Billy Boy or Tastee for restro flair and great comfort food. Billy Boy is known for its burgers and ice cream, while Tastee shines with its loose meat sandwiches. Both pair best with root beer, and if you like onion chips, they’re worth the upgrade at both places.

Related post: Read about Tastee and other places Oh My! Omaha visited on a weekend getaway to Sioux City.

Dinner: For a sit down experience, Rebo’s on Fourth Street has amazing fajitas. M’s, also on Fourth Street, makes pasta worth the calories. Four Brothers in the Morningside area of Sioux City (near the mall and Highway 29) serves up delicious gourmet burgers and more.

Where to play in Sioux City

Pools & water fun: Riverside Park is your best bet – it’s Sioux City’s best public pool, complete with waterslides, a splash zone in the pool area. There are two wheelchair-accessible splash pads on the other end of the park near the Miracle Field adaptive playground. Lewis and Lief Erickson parks also have pools open to the public.

Other outdoor fun: There are more than half-dozen disc golf courses in the Sioux City area, with the newest almost completed at Lief Erickson Park. You can also enjoy a walk or bike ride along the riverfront, play mini golf, or shop at the Sioux City Farmer’s Market to get some fresh air and sunshine (and veggies!).

Tip: Be careful on Facebook, theatergoers! Sometimes it is hard to tell which event posts are for events at your Omaha Orpheum Theater and which are for our Sioux City Orpheum!

Indoor sports: You can get sporty indoors with the rock climbing wall at the Long Lines Center. Check out the Drop Zone Family Fun Center with trampolines, a ninja course and laser tag. Cool off at the IBP Ice Center with indoor ice skating year round.

Museums: Sioux City has a surprising number of museums for a city of this size. Some that I especially recommend to visitors include the Sioux City Art Center (the Grant Wood corn room is a must-see!), LaunchPAD Children’s Museum for little visitors, and the Sioux City Railroad Museum with its brand new grand-scale railroad now open for rides.

Siouxland’s best souvenirs are mostly edible. Jolly Time Koated Kernels makes delicious popcorn flavored with cheese, chocolate, candy, and more. You can buy them at their factory store as well as at locations around Siouxland.

Or head to Palmer’s Old Tyme Candy Shoppe, which never disappoints with their candy. From factory seconds to gourmet truffles and handmade fudge, you’re sure to find a type (or 10) you and your loved ones will gobble with delight.

Related post: Palmer’s Candy Co. invented the Twin Bing, so when you’re in Sioux City, you’ve got to try it! So much so, it’s on the Sioux City bucket list!

For less perishable keepsakes, try the museum gift shops and Sioux City Gifts. One of the cutest options for kids is a small plush Newfoundland (like Lewis & Clark’s dog!)

Whether you’re visiting family, or in town for work or a kid’s sport tournament, or coming up just for fun, Sioux City loves visitors from Omaha. I hope these tips help you make the most of your time up here. Drop by anytime, neighbors!

Lindsay is a Sioux City mom of three who loves dramatic earrings, buttercream frosting, hiking with her family, and crafts from hand embroidery to slime making. Lindsay writes about family-friendly fun in Sioux City and beyond at SiouxlandFamilies.com. Her latest venture is a series of YouTube videos highlighting area attractions in a minute each, “Sioux City in 60 Seconds.”