Posted on Published: April 25, 2019 Categories What To Do In Omaha

Every June, the NCAA Men’s College World Series sweeps into Omaha. If you’ve never been to a game, it’s a whirlwind. Here’s the most comprehensive guide to going to a CWS came, with everything you need to know before you go, including tips for tailgating and getting game tickets, plus what to do in the event of bad weather.

UPDATE: This post was first published in 2019 and has been updated in June 2021 with current information, including changes due to COVID-19.

When is the CWS this year & is anything canceled?

Never been to Omaha? Figure out what you can do between games with this guide to Omaha.

Fyi: Omaha is on CST time.

Where can you get tickets?

Note: There are no 2021 General Admission tickets due to COVID-19 restrictions.

General Admission tickets are the most affordable way to see a College World Series game.

The audience tends to be younger.

It’s important to note that General Admission tickets don’t guarantee a seat! Most games won’t be a problem, but big games like the opening weekend or finals, things could be tight. When it is at capacity, they admit people in a “one in, one out” basis. General Admission seats about 5, 500 fans, with about 1,500 extra spots for standing room people.

If you’re determined to snag a seat in General Admission, get in line early. At the very least, arrive when gates open (two hours before game time). Some say to get there even earlier for big games.

The queue begins on the sidewalk adjacent to 10th Street. There will be stadium staff at the front of the line and at the end of the line. You’ll most likely enter the stadium through Gate 3, though occasionally you may be directed to enter through Gate 4.

On two-game days, if you have General Admission tickets to the second game, keep in mind the first game could go long. If that’s the case, expect the line to be longer and the gates to less than two hours before the game.

And speaking of two-game days, you cannot go to the first game and stick around in General Admission for the second game. The stadium is cleared out after each game. You’ll have to get back in line.

You may be able to upgrade your general admission. Available Reserved Seats open up when the box office opens at 10 a.m. Get in line before 9 a.m. on game day and cross your fingers – they will do a random drawing to set the order fans line up.

Tip: Be patient. Even the most popular games, you will get in eventually, if only after a few innings.

Getting to a CWS game

Expect traffic (for Omaha standards) and some drivers getting confused by one-way streets in some parts of downtown Omaha. Parking is sparse and expensive, so I’d recommend finding alternative ways to get to a game.

The CWS Stadium Circulator is a popular choice and it’s only 25 cents a ride. Pickup locations include: Some downtown hotels, the ballpark, Fan Fest, and spots in the Old Market.

Additionally, the Omaha bus service has standard routes that pass by TD Ameritrade Park. Look up that information here.

Omaha has a bike-share program, just look for the blue bikes at a B-station throughout downtown Omaha.

Omaha also has ride-share options like Lyft and Uber.

Where to park for the College World Series

I get it. You’re planning on driving (and maybe tailgating, right?). You’ll find parking for nearly 4,000 cars near TD Ameritrade Park, though some will be for season ticket and pass-holders. Public parking Lot A and the CHI Health Center garage are one of the closest options, and that will set you back about $10-$12 a car.  You’ll find ADA parking there, and additional ADA parking stalls in Lot B. Tailgating is permitted in TD Amertrade Park and CHI Health Center lots. Lots open at 8 a.m. and close about 90 minutes after the event.

Additional parking that also allows tailgating can be found at Creighton University.

Motor homes or RVs are not allowed in most of the parking lots. You can find parking for RVs around the Omaha metro including, Haworth Park, Lake Cunningham, N.P. Dodge Park and West Omaha KOA. Outside of Omaha, there are spots at Horseshoe RV Park, Lake Manawa, Mahoney State Park,Riverwest Park, Walnut Creek Lake and Wilds RV and Golf Resort.

The City of Omaha has surface parking and parkings lots, as well as metered spots. Pricing varies. I recommend downloading the Park Omaha app and paying for your metered parking by phone.

Tailgating at the College World Series

You’ll find no shortage of tailgating opportunities in the blocks near the stadium. Be sure to know the rules or you can get into trouble (ie. open containers are prohibited and you will get ticketed).

Another thing to know is that the MECA-controlled lots near TD Ameritrade Park open two hours before CWS events start. (MECA is an acronym for Metropolitan Entertainment & Convention Authority, which manages the stadium).

The MECA parking lots are located:

– The closest lots to TD Ameritrade Park are Lot C, 10th and Mike Fahey streets, and Lot B, located along 10th Street between Mike Fahey and Cass streets.

The cost of parking in a CHI Health parking lot is $8 and garage parking is $12. You cannot do in-and-out parking.

Pro Tip: “Tailgating is pretty much in every direction from the stadium. You can also reserve a tailgating spot online.”  – Madonna B.

What to bring to a CWS game

Things you can bring to the game:

Pro Tip: Don’t carry a big or heavy purse to the game. Most clear bags aren’t going to be heavy to begin with, but don’t overpack them. – Jamie H.

Pro Tip 2: Pack sunscreen or put it on before you go to the game. “A hat and sunglasses are essential.” – Jamie H.

Things to know about rain delays at the CWS

It never fails, there will be bad weather at some point during the run of the College World Series. If you have a rain delay, here’s what you should know:

Eating and drinking at the game

You cannot bring in outside food and drinks to the College World Series. So, you’ll have to get your food there. There’s the usual hot dogs, burgers and pizza options, of course.

If you’re wondering where to eat or drink between games, check out this post with details on recommended restaurants and bars are near the stadium.

Things to know about Opening Weekend of CWS

Many people think Opening Weekend is THE time to go to a game at the College World Series. Every team and their fans are hopeful. It’s one of the busiest weekends in the Old Market. It’s fun…unless you don’t like crowds.

There’s usually a great free concert near the stadium on Opening Night. In 2021, no concert was announced and the Opening Ceremony has been canceled.

Pro tip: “Opening Weekend!! It is the best because all teams and fans are in town and everyone is very excited. The tailgating is the best opening weekend.” – Madonna B.

Fan Fest starts on Opening Weekend, too. Fan Fest is a free zone with games, merchandise and photo opportunities. This is a great place to visit with kids, even if you don’t have tickets to a game.

TD Amertriade Park Omaha, 1200 Mike Fahey St., has been the home to the NCAA Men’s College World Series since 2011. The ballpark seats 24,000. If you want to see a layout of the ballpark, click here.

Yes. There are three accessible entrances. For an elevator, use Gate 2 near the ticket windows, or the Suite/Club entrance located south of Gate 1 on 13th Street. The Gate 3 is accessible by ramp and is located on the east side of the stadium.

Guide dogs are permitted in the park. It’s recommended that you bring proof of certification or a license for service animals. Notify your ticket seller at the time of purchase so you can get an aisle seat.

Need a hotel for your trip to the College World Series? Read this post of recommended hotels near the stadium.

If you want to start planning food options because you’re going to be traveling with your kiddos, begin with this post about family-friendly restaurants in downtown Omaha. For a more general overview of the best restaurants near the baseball stadium, visit this post. 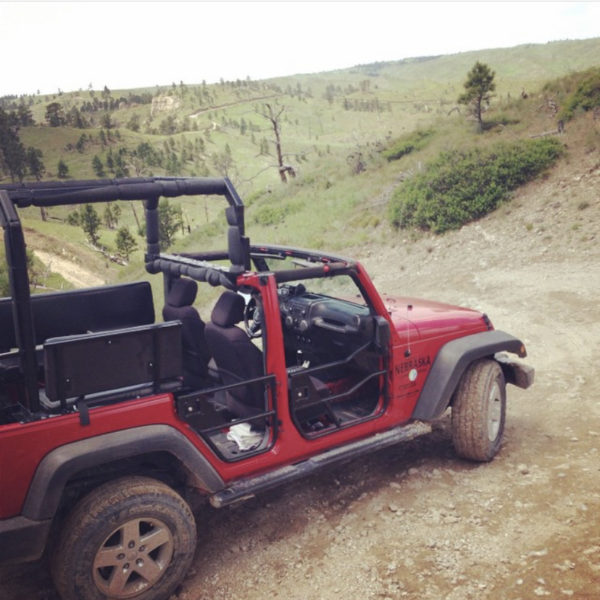 Next
10 Unforgettable Things To Do This Summer In Nebraska (2021 Updates)
Click here to cancel reply.