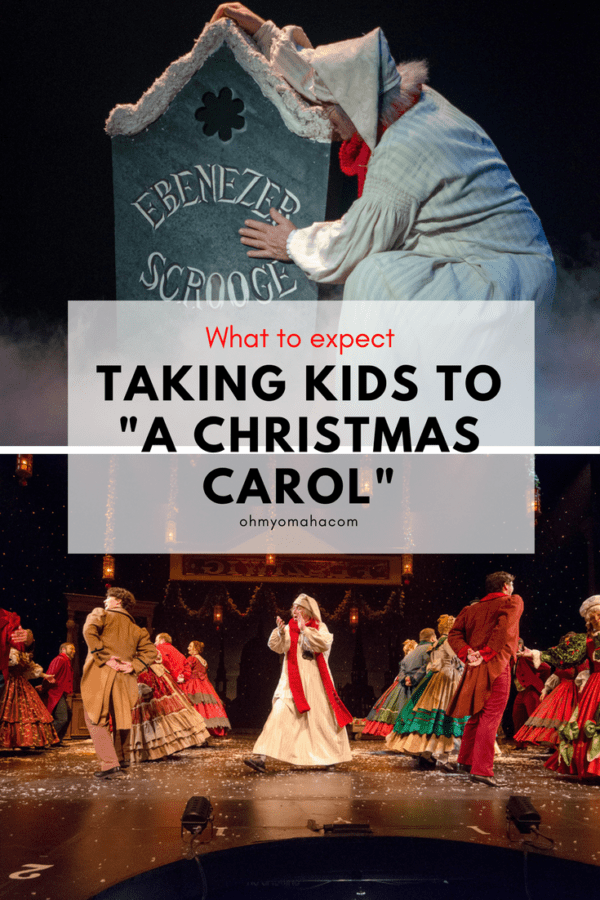 I think I’m becoming a Christmas softie. I was always more of a “Scrooged” kind of Christmas story girl, not “A Christmas Carol.” The Dickens classic was a little too sweet. But here I am, joyful after seeing Omaha Community Playhouse’s production of “A Christmas Carol” this past weekend. I get it, now, why families make it a tradition to see every year. I feel like it’s the quintessential show to kick off the holiday season.

Updated: This post was first written in 2017 and has been updated with 2019 information.

Disclosure: I received two complimentary tickets to review the show, so I took my oldest son (he’s almost 8) to see it for his first time.

Thinking of bringing your kids to see this holiday classic? Here’s what to expect:

What to expect at “A Christmas Carol”

– This is a huge production. The cast is quite large, the sets look remarkable, and the costumes are to die for. When the curtain goes up for that first number, you’ll be wowed by this show. It’s community theater at a different level.

– Jerry Longe has played Ebenezer Scrooge for more than a decade, and it’s hard to imagine anyone else in the role. Granted, I’ve seen Dick Boyd in the role many years back and thought the same. But, Longe really has made this role his own. He adds some fun touches that made my son laugh.

– There’s a surprise at the end of the production. Don’t sneak out when you think it’s over. Just wait.

The first act is 70 minutes long, so if you or your kid has a small bladder, go before the show begins. The intermission is long enough for a restroom break, though, if you can hold it.

The whole show is about 2 hours and 20 minutes with the intermission. If you partake in any of the Christmas cheer in the lobby (AKA, drinks), you might not last until the end.

This is suitable for most ages, though kids under 3 are not permitted. Early grade school ages would be great ages to introduce this show. The length of the show, though, makes me think that it may be a test of attention spans on really young ones.

Also, I will say this: There are a couple of parts that may scare young ones. When the ghost of Jacob Marley arrives, he’s accompanied by minions. Those little goblin kids are the stuff of nightmares. (I think they bothered me more than my son)

The Ghost of Christmas Future might also scare kids. I remember the big things being a lot scarier, but it wasn’t so bad this time around. Maybe I’ve grown up.

My son’s a second grader and thought the music was one of the best parts of the show, so there you have it.

“A Christmas Carol” is one of Omaha’s favorite holiday traditions. Grumpy and greedy Ebenezer Scrooge goes on a life-changing journey led by three ghosts.

If you go to “A Christmas Carol”