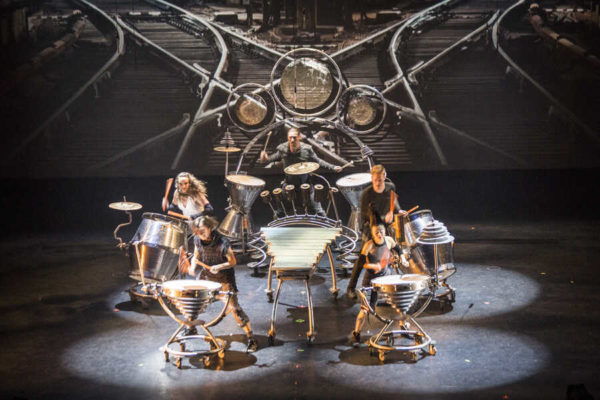 For as long as I’ve had this blog, I’ve been cluing you in to the best family shows brought to Omaha by Omaha Performing Arts. I worked there for a few years, and now I’m just a fan. So, here’s the next show you’ve got to see: Scrap Arts Music.

Scrap Arts Music is a percussive group — think “making drums out of everything” kind of thing. They’ll perform “Children of Metropolis” at the Holland Performing Arts Center on Oct. 25 at 7 p.m. It’s an all-ages show – so read on to see if it’s right for your family!

Disclosure: Omaha Performing Arts provided complimentary tickets to me and provided the tickets for the giveaways.

The show starts at 7 p.m., but arrive early for the family-friendly lobby activities that start at 6 p.m. One of the activities will be making your own instruments.

Who is Scrap Arts Music?

What’s “Children of Metropolis” about?

“Children of Metropolis” is the latest production by Gregory Kozak and Justine Murdy, the co-founders, artistic directors and designers of Scrap Arts Music.

According to the press release, “It is a fast-paced, all-acoustic percussion show, with sci-fi-inspired film and video projections. The quintet performs with gymnastic agility and percussive drive, demonstrating incredible musical skill while striking, moving and bowing hand-made, mobile sculptural instruments made from recycled and salvaged materials.”

How to get tickets for Holland Performing Arts Shows

Scrap Arts Music will perform “Children of Metropolis” at the Holland Performing Arts Center, 1200 Douglas St., on Oct. 25 at 7 p.m.

Tickets starting at $20 are available at TicketOmaha.com, in person at the Ticket Omaha* Box Office located inside the Holland Performing Arts Center, 1200 Douglas Street, or by calling (402) 345-0606. The performance is sponsored by Children’s Hospital and Medical Center.

*Ticket Omaha is the official retail ticket outlet for all performances at the Orpheum Theater and the Holland Performing Arts Center. Tickets purchased from other ticket retailers such as secondary ticket agencies or brokers may be more expensive and may not be valid.

How to win tickets to Scrap Arts Music

I’ve partnered with Omaha Performing Arts to give away TWO SETS of family four passes to see Scrap Arts Music perform at the Holland Performing Arts Center! You can enter both giveaways to increase your odds of winning.

The first giveaway starts right now! Use the Rafflecopter form below to enter the giveaway. Tickets are good for the Oct. 25 show at 7 p.m. at the Holland Performing Arts Center.

Nitty Gritty: The giveaway ends at 11:59 p.m. on Saturday, Oct. 19. Winner will be contacted via email within 48 hours of the giveaway and will have 48 hours to respond before another winner is drawn. Must be 18 or older to enter and tickets are not exchangeable or refundable.

I’ll kick off a flash giveaway on Facebook this Monday! One winner will receive four tickets to see the Scrap Arts Music performance at the Holland Performing Arts Center.

One winner will be drawn on Wednesday morning. I’ll be contacting the winner via Facebook for the drawing. 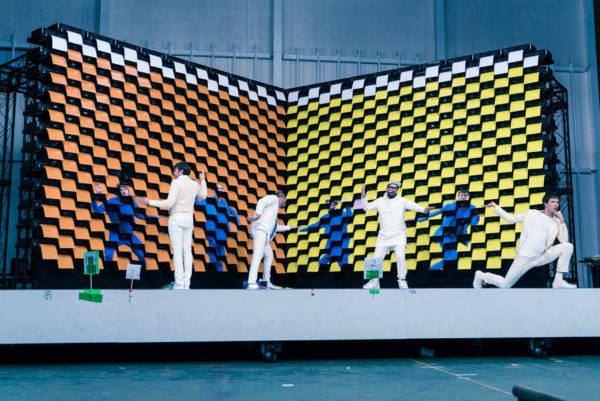 OK Go is coming to Omaha, you guys. Do you know how many times I’ve watched OK Go’s “This Too Shall Pass” with my son? So many, I could recreate their Rube Goldberg Machine in my dreams.

So, when I heard the OK Go: The Live Video Tour is exactly what it sounds like – live music and with video – I thought, this show is perfect for him. I’ve got the details on the Oct. 19 concert below and…a giveaway!

Disclosure: I’ve partnered with Omaha Performing Arts for this post, who is providing the tickets for the giveaway. All thoughts, opinions and typos are my own.

OK Go, the rock band famous for their wildly creative videos, brings their unique magic to the stage in 2018. They’re performing at the Holland Performing Arts Center in Omaha on Friday, Oct. 19, at 7:30 p.m.

Tip: Any chance you get to see a band you like play at the Holland Performing Arts Center, you should take it.

According to the press release: “As you might expect from the pioneering band who danced on treadmills and in zero gravity, this show is unlike any you’ve seen before: it’s a film screening and a rock concert rolled into one.”

“Like the band, the show defies categorization, but bring your family and expect dancing, joy, and wonder,” according to promoters.

Let’s hear from the band about why this is a show is going to be great for families (the video takes a while to appear on this page, so sit tight, it will appear soon):

Cost: $35-$50. Purchase tickets at TicketOmaha.com or save on ticketing fees and purchase in person at the box office located inside the Holland Performing Arts Center.

You want to go, right?

I’ve partnered with Omaha Performing Arts to giveaway a set of FOUR tickets to OK Go: The Live Video Tour! Please enter through the Rafflecopter form below:

Giveaway ends at 11:59 p.m. CST on Sunday, Oct. 14. One winner will be drawn and contacted via email. The winner will have 48 hours to respond before another winner is drawn. Must be 18 years old or older to enter. Tickets have no cash value and may not be exchanged for another show. Good luck!