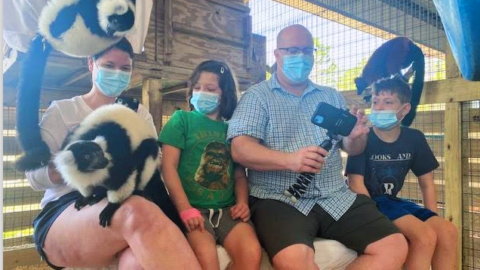 There are two types of attractions I almost always plan a visit to while on vacation: Zoos and science centers/children’s museums. They’re reliably fun and educational. For our spring break trip to the Gulf Coast of Alabama, we included a trip to Alabama Gulf Coast Zoo. And as we’d hoped, it’s was fun and educational, plus it had the bonus of giving us several funny stories to share about specific animals. Read on and laugh with us.

Disclosure: This trip was hosted by Visit Alabama Beaches Gulf Shores & Orange Beach. This post may contain affiliate links. All thoughts, opinions and typos are my own.

2020 was a year, wasn’t it? It stunk for all of us. Alabama Gulf Coast Zoo had a double-whammy that year, though. Yes, the pandemic forced closure for a time, as well as caused the zoo to adjust social distancing and other procedures. It also stalled some projects.

They also were hit by a hurricane in September 2020. They were expecting a tropical storm and instead, it strengthened to a hurricane that ended up knocking out several large trees and removed the antique cover to the carousel.

So, when you visit this year, and perhaps into next, know that you’ll see construction projects underway. They’ve got big plans for growth. Plus. You’ll also see some areas that should be more shaded but aren’t…thanks to that hurricane. They’re aware of it, and are working on a plan to receive full-grown, donated trees.

Now, on to the stories.

There are a few places to see lemurs at the zoo. The most obvious are the two lemur islands right in the middle of the zoo’s loop. But, tucked in the petting zoo area, where you’ll find most animal encounters, you’ll find a collection of adolescent lemurs. And they’re all named after authors.

We were fortunate enough to try the lemur encounter during our visit. This encounter isn’t quite ready for the public yet, and has some tweaks to do in this post-pandemic world. Anyway.

The lemurs in their names. The largest of the bunch, a female black and white ruffed lemur named Maya, was the matriarch and she ruled the bunch.

The most curious and friendly of the lemurs, at least with my family, were Fitzgerald and Harper. And living up to his namesake, Poe was the most ambivalent to having visitors.

Not The Kevin Bacon, but a soccer playing pig named after him. I didn’t actually get to see any of his kicks, but once the event stage has its sound hooked up, he’ll be a part of the animal shows.

3. Chucky, the escape artist that brought fame to the zoo

Chucky the alligator managed to allude keepers and hang out in the old location for some time, drawing national attention and even leading to a documentary about the zoo.

Being Alabama, the locals weren’t too impressed with an escapee like Chucky since alligators are part of life there. But, the rest oof the world was certainly intrigued by the 11-foot reptile.

That was years ago and now Chucky is in his much larger enclosure, lazing around most of the time.

Also a fun fact about Chucky: He only eats about twice a year now. He’s not very active and doesn’t need much food.

4. Bruce Qwillis is an internet celebrity

The zoo keepers here love their puns, and I’m here for it. Bruce Qwillis is a chill, African crested porcupine that we met while he was out for an enrichment stroll at the zoo. (No touching, of course)

In early 2020, when the zoo and everywhere else in the world shut down, the zoo decided to film Bruce and a star was born. Now he has a “Myth Busters” type program online where he helps bust myths about animals.

5. The birds talk, but probably not to you

There’s a new aviary in the works that should open this summer. There will be song birds, parrots and other feathered creatures, many of who were rescued from homes who didn’t expect them to live so long (they’re about an 85-year commitment).

During our tour of the zoo, we heard a funny story about some of those parrots, who learned to talk from their previous owners. Once the last of the visitors are gone for the day, the birds begin to talk up a storm. They’ll greet the keepers and bid them adieu when it’s time for them to head home.

I never thought I’d have a subhead quite like that, but how else can I lead into a story about two sloths? They only relieve themselves every two weeks, a fact that fascinates me.

We got up close to the two, two-toed sloths during one of the zoo’s encounters. It was the antithesis of a lemur encounter, in that these two were balled up and mostly unmoving while we were there. Which is to be expected.

We did get to offer Sylvia some vegetables, which she slowly eat.

7. Raja is beautiful but he’s not the brightest crayon in the box

We walked around for a bit with Caitlyn, the big cats’ caretaker, who shared some fascinating stories about them. You may be able to chat with her or a coworker once the Big Cat Kitchen is completed. That’s where you can watch them prep all the cats’ meals, and there will be an intercom for you to ask questions.

Anyway, back to Raja. He’s one of the three Bengal tigers at the zoo, and specifically, he’s the white one. And Caitlin was joking around saying that big cats are either pretty or smart, and well, look at how gorgeous Raja is.

His sister, who resides with him, defies the adage, and is both smart and beautiful.

8. The giraffes have favorites

One of the more popular animal encounters involves feeding the two giraffes. These handsome guys had quite a line ready to give them a leafy treat. We were touring the zoo when we passed by the giraffes. They spotted our guide, Wendy, and almost immediately started walking her direction, away from all the food!

Wendy says it’s because she’s usually with people who feed the giraffes, but I suspect they adore the lady. She alternated between going up to the feeding area so the giraffes would return to the people waiting to feed them, and hiding behind us.

FAQs about the zoo

Q. How much are animal encounters?

Current encounters that weren’t open as of this writing:

A. We visited during the zoo’s off-season, as well as the first spring after a hurricane and the pandemic derailed many plans. While I thought it was a great time to visit – not crowded, not too hot – it also meant that some things weren’t open yet. So, if you plan a spring visit just know that some food options aren’t available just yet, and some things may be under construction.

Regardless of the time of year, word is, the animals will be most active in the morning. This is definitely the case for the lemurs, but it’s a generally known fact for most animals (besides nocturnal creatures). 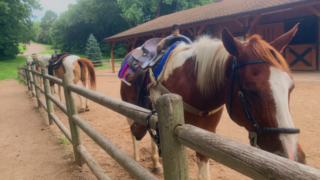 Previous
28 Places For Horseback Riding, Camps & Lessons Near Omaha
Next
Yellowstone Itinerary That Hits The Highlights In 3 Days
Click here to cancel reply.