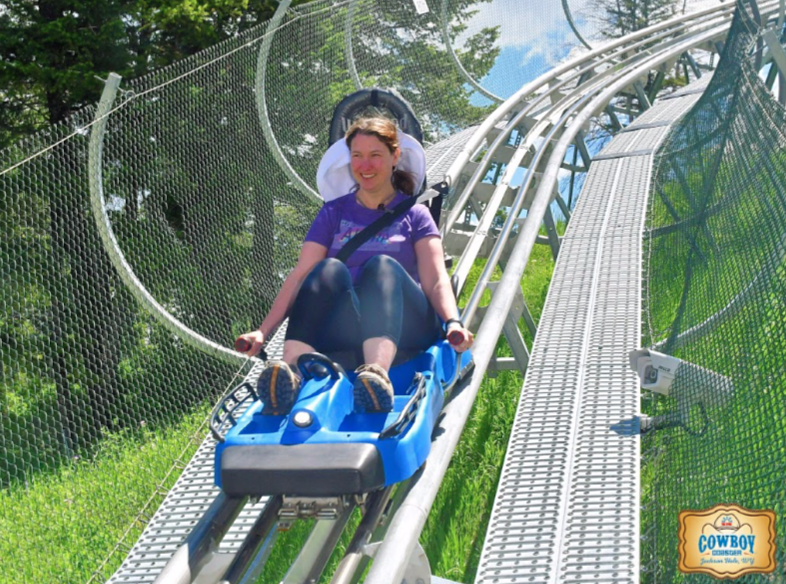 We were on a week-long family vacation to Grand Teton and Yellowstone National Parks when we found ourselves in Jackson Hole for the day with zero plans. After scouring my guidebook for the region — and figuring out why I could only find activities listed for Jackson, not Jackson Hole — we had a game plan. Here’s a list of fun things to do for in Jackson if you find yourself with a free day there.

First off, Jackson Hole is confusing if you’re asking people about it AND using a guidebook.

Yes, so when people say they went to Jackson Hole, most likely, they went to the posh town of Jackson. It’s known to attract celebrities and fun-seeking families.

Most of what we did in “Jackson Hole” actually took place in Jackson.

We visited Jackson Hole in the summer of 2020, so there were many safety measures in place to keep the public and employees safe. Here are a few I noticed:

Check for health updates before your trip to Jackson Hole. Read about local, county and state-wide conditions here.

Snow King Resort in the summer

On the edge of town, Snow King Resort rises into the mountains. In the summer, it becomes a playground for little daredevils who want to race down the mountain on an Alpine slide or the thrilling Cowboy Coaster.

I did both, and let me tell you, as an adult, the coaster feels less like I was hurdling down the mountain precariously.

Our visit was an impromptu one, so we did not have the chance to make reservations, which would be essential if you want to do the Tree Adventure ropes course. We arrived at around noon and it was full for the day.

It’s usually included in the all-day pass, which we’d bought. There is no discount on the pass, by the way, if the ropes course is full or things like the bungee trampoline are closed. (The all-day pass is $125.)

The all-day pass includes unlimited rides down the slide and coaster, putt-putt golf, and the maze. We visited in a Monday and enjoyed no lines, allowing the kids many, many rides down the mountain.

I’d recommend weighing the option of purchasing ride passes a la carte. While my kids were content to ride the Cowboy Coaster over and over again, if yours are satisfied with one ride, just get the one ride pass for it. It costs $20.

Things to do in downtown Jackson

I’ll admit, the downtown area is more enticing for shoppers than kids looking for fun activities. There’s a lovely bookstore called Valley Bookstore, a Five and Dime, and tons of souvenir shops.

And if you’re there without kids, there are quite a few saloons including the well-known Cowboy Bar with saddles for seats.

My kids were content playing in at Jackson Town Square. It’s a green space with no playground, but plenty of room to run and play hide and seek. Plus, there were ground squirrels, which seemed to fascinate all kids there.

You know you’re at the city park when you come across the antler arcs at the four corners of the park! They’re pretty iconic, and many people snap a selfie in front of them.

Nearby, a horse-drawn stagecoach trots by occasionally, which always caused my kids to pause and watch.

Where to eat in Jackson with kids

We weren’t in Jackson for long, but we did have a few great meals and ice cream. For good pizza, head to Pizzeria Caldera located pretty near the park in downtown Jackson. The pizzeria is on the second floor and we nabbed a table on the balcony overlooking the busy sidewalks below.

The kids stuck with their standard go-to topping, pepperoni.

If you like local beer and pub food, Snake River Brewing Co. is a family-friendly brewery in Jackson. It’s about a half-mile from Snow King Resort, so it made for a great end-of-day meal. There is a kid’s menu and the serving sizes for kids are huge.

The brewery has a beautiful outdoor eating area but we were so hot from our day at Snow King, we opted for the quieter indoor space.

We had ice cream at Moo’s Gourmet Ice Cream, a shop that’s within walking distance of Jackson Town Square. It was a very popular ice cream shop with some outside seating.

It’s no secret, Jackson Hole is in a beautiful part of the country. Its proximity to TWO national parks is notable. If you are planning a trip to Jackson Hole, I highly recommend visiting both Grand Teton National Park and Yellowstone National Park.

Here are a few things to do at the parks:

This cabin puts you between Grand Teton and Yellowstone