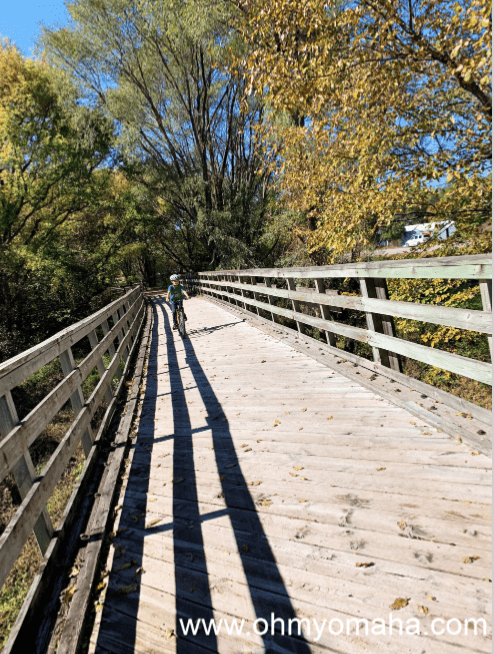 Omaha has a pretty decent amount of paved and mountain bike trails, but every so often, we come across a trail that outshines the others. I’m talking about the Wabash Trace Nature Trail, which yes, isn’t in Omaha, but it’s close enough. Let me tell you about this long trail in southwestern Iowa.

Related post: 15+ things to do in southwest Iowa with kids

Where is the Wabash Trace Nature Trail?

The Wabash Trace Trail is a rails-to-trail path in western Iowa stretching from Council Bluffs to Blanchard. It’s 63 miles of crushed limestone and, for the most part, it’s pretty straight and flat (being a former railroad route and all).

Most people that I know, ie. those living in the Omaha metro area, start in Council Bluffs. The access point in Council Bluffs is on the south end of town, not far from Iowa School for the Deaf. There’s a park near the trail where you can leave your car, as well as a Lewis Central School District school parking lot.

I’ve biked this trail mostly, but there are quite a few runners and walkers on the trail, as well.

A few things to know about the trail

This trail is maintained by two nonprofits and volunteers, not taxpayer money. So, it’s extremely important to pay the minor trail pass fee so surfaces and bridges can be maintained.

And so trees and debris can be removed from the path.

The last I’d checked, the fee is $2 per day for anyone between the ages of 12 and 64, or an annual pass of $20. You simply drop your fee or donation in the collection poll at any trailhead. Annual bike passes are available at local bike shops.

The northern half of the trail, where I’m most familiar with, offers vistas of the Loess Hills. I’ve yet to make cover the entire distance. If you want to, there are places to stay overnight, making it a manageable overnight or weekend trip.

Must-stop on the trail: Mineola

Most Omaha bikers of any skill level can make the out-and-back trip to Mineola. It’s not easy — it’s nearly 20 miles in all — but it can be done.

Why Mineola? It’s the first town stop on this trail when you depart from the Council Bluffs trailhead. And it’s home to one of the first restaurants that’s a short ride off the trail: Tobey Jack’s Mineola Steakhouse.

It’s located at 408 Main St., so about a block or so from the trailhead in Mineola. The town isn’t huge, so it should be fairly easy to find.

What to like about it? Outdoor seating and lots of it!

We ordered a few appetizers to split, but there’s also a kid’s menu and much heartier fare to choose from.

Riding with kids on the Wabash

There is a Wabash trail map you can check online to see the distances between each stop. We rode the Council Bluffs to Mineola leg of the trail with two kids ages 7 and 9.

My kids are fairly seasoned bikers for their young age, so the 9.6-mile one-way ride wasn’t too difficult, but it did require us a stop to rest each way.

The good news about that route:

The bad news about that route:

The popular Taco Ride on the Wabash Trace Trail

Perhaps you’ve heard of a Thursday night bike ride called The Taco Ride. It’s the exact same route I took with the kids, from Council Bluffs to Mineola.

This popular weekly event draws hundreds and sometimes thousands of cyclists, and it’s a lot of fun. While you may just breeze by Margaritaville on a day trip, it’s a must-stop during the Taco Ride.

It’s been going for decades now, and the Taco Ride got its name because the original restaurant you’d stop at offered discount tacos and beers on Thursday nights. The name stuck even when it turned into a steakhouse.

There is no set-in-stone start and end time, but most people head to the trail shortly after work ends on Thursday. Consider it the bike rider’s happy hour.

Is it kid-friendly, you might wonder? Well, I’ve been on the ride a few times in my younger days with friends and rarely saw a kid riding with a parent. I’d say kids wouldn’t be shunned, it’s just not the scene I’d want to bring a kid to.

But if you do want to bring kids, go early in the evening and head back before dusk.

There are some risks to the Taco Ride, if you aren’t prepared. Here are a few tips:

Find more things to do in Iowa by reading a few of my favorite posts:

10 Things You Must Do In Council Bluffs In The Fall