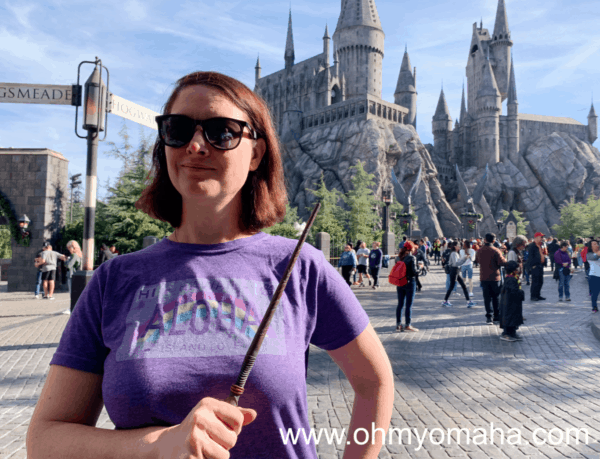 The one ride you must go on at Universal

By far, Harry Potter and the Forbidden Journey was a ride of a lifetime. The ride had incredible effects, smooth but fast “flying” and memorable experiences being immersed in the world of Harry Potter was well worth admission.

You’ll want to make this ride your first ride of the day. Find it at the far end of the Wizarding World of Harry Potter.

My son’s favorite thing to do (repeatedly, and returning to try some more times) were the spells at The Wizarding World of Harry Potter. While the interactive parts are free, you can only do them with a special wand purchased at Ollivanders.

That special wand will cost more than the other wands. And, if you want to have the wand of a specific character, it will cost a bit more. For our two kids’ wands, we paid nearly $100.

Worth it? Yes, in our case. My kids made objects float, doors rattle and fire appear out of chimneys. Those working around Hogsmeade were on hand to coach them in wand waving technique.

It made the experience of Hogsmeade so much more immersive and exciting for my kids.

You’ll find a lot of hidden gems throughout Universal Studios Hollywood, and a lot of them will be encountered in The Wizarding World of Harry Potter. Venture into shops to find “The Book of Monsters” (just try to stop your kids from waking it).

Over in the “Simpsons” area, you might hear or even see the nuclear power plant go into meltdown mode or hear the sirens caused by a prison break by a particularly villainous man.

OK, OK this one can be argued. For me, the best character encounter was at the Raptor Encounter, where we saw an incredibly realistic young raptor interact with guests. She tried to eat the turkey leg one woman was holding.

And just a few steps away, a triceratops lumbered around. We were told how to pet her correctly (back of hand, gently stroking downward). The keepers really made her seem like a lifelike, fragile giant creature.

Second runner-up was Decepticon, the giant villain from Transformers. He interacted with each guest in line to get pictures with him, poking fun at one family’s affinity for denim, for instance.

He talked to my daughter about her T-shirt that read “Still waiting for my Hogwarts letter.” He asked her to cast a spell, which she was a little too shy to do, so he told her she needed to keep learning. It was all pretty entertaining.

Universal Studios Hollywood had A LOT of character encounters with very short lines for most. It was more up to you to get creative with the characters for the photos.

I had the most fun with “Simpsons” characters. My kids and I devised an evil plot with Sideshow Bob and I had a good laugh with Krusty.

Most amazing show at Universal

I’ll try not to use too much hyperbole in describing this, but the Christmas show projected on Hogwarts at The Wizard World of Harry Potter was the best light show I’ve ever seen.

My husband and I spent quite some time trying to imagine how big the projectors had to be to get create the illusion of dancing ghosts, twinkling Christmas tree lights, and fireworks on the castle walls.

Truly a spectacular sight, so don’t miss it.

If you ask my daughter, though, the best show was the Animal Actors Show. I mean, the trained dogs were adorable, but can’t compete with wizardry.

We’ll agree to disagree on this one.

This category had some tough competition. Universal Studios Hollywood is known for extravagant special effects and when it comes to rides, several had incredible 3-D experiences.

Most impressive to me was found on the one-hour Studio Tour, especially when the tram stopped at “Skull Island.” It’s hard to grasp what technical skill went into creating this intense experience that surrounded all sides of the tram.

Being a family of “Simpsons” fans, we couldn’t resist getting a giant pink donut from Lard Boy Donuts.

It was surprisingly good and a substantial treat even when split among four greedy sugar fiends.

If you’re a Harry Potter fan and you’ve never had butterbeer, head straight to The Wizatding World of Harry Potter and order a round.

I’m actually not a big fan of the drink, so I skipped it on our visit. I am, however, a fan of Tiki drinks, so I splurged on a $20 fruity concoction at Isla-Nu Bar. It came in a souvenir cup and was topped with a fresh orchid.

If we’re talking rides, you’ll likely get the wettest riding Jurassic Park: The Ride. No matter where you sit, you can’t escape that fact.

And my son seemed to be a magnet for splashes no matter which ride we were on. World Famous Studio Tour? He got wet. DreamWorks Theatre Featuring Kung Fu Panda? He got wet.

Still, none of those compare to the wettest experience at the park. That honor goes to Super Silly Fun Land, in the “Despicable Me” themed area. And more specifically, it’s the Wet Zone I’m talking about, which has 80 water play features.

We visited on a cooler January afternoon, so no kids were playing in the water, but I can just imagine how soaked they’d all be on a summer afternoon. There was a huge bucket of water getting dumped out occasionally, as well as several jet streams of water.

Tip: If you’re going with young children, bring a change of clothes!

Want to try visiting Universal Studios Hollywood AND Disneyland in just two days? There’s a plan for that. Here are my 12 tips for making the most of 48 hours at two of the world’s best theme parks.