Favorite Historic Hotels For Families In The U.S. 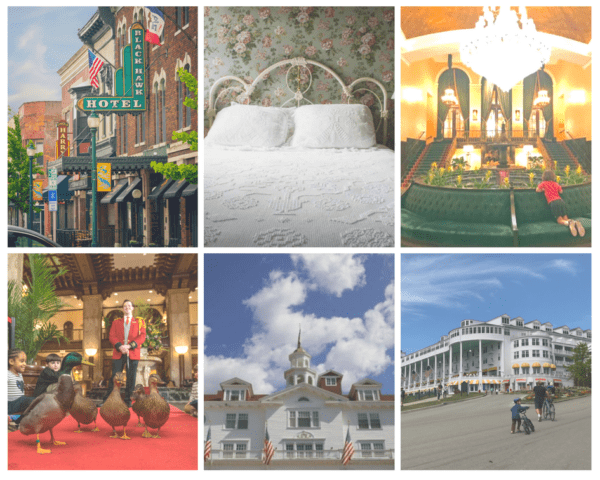 Historic hotels are unique places to stay on vacations, especially when traveling with kids. I’ve been lucky enough to stay at some Midwestern historic hotels that were very accommodating to families – some with a pool, one with a great kid’s program, and all with enough interesting details to encourage kids to explore more. Other travel bloggers have had similar experiences. So, I reached out to my friends and asked them to share their favorite historic hotels for families in the U.S. 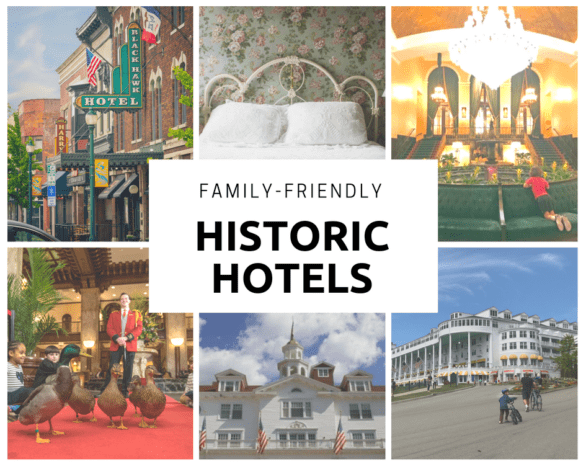 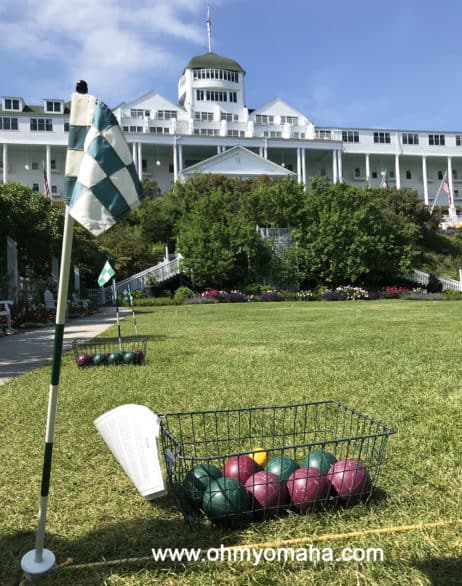 Why go there: Built in 1887, the Grand Hotel is a National Historic Landmark on an island that’s completely car-free. It’s a throw-back to another time, with dress codes for dinner, tea time, and an expansive porch that encourages you to slow down.

What kids will like there: This hotel has been ranked among the top all-inclusive hotels for families for a reason. There’s a large outdoor pool, daily kids programming, and kid’s menus at restaurants.

What’s nearby: Mackinac Island is small, so technically everything is nearby. You’ll want to rent a bike from the hotel to explore the island or take a horse-drawn carriage tour. Fort Mackinac is within walking distance, too. 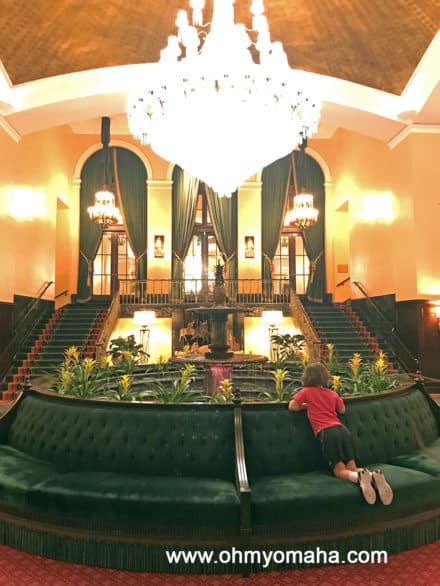 The historic lobby of the Amway Grand Plaza had a fountain my daughter liked to watch. The hotel was built in 1913.

Why go there: Construction of the original hotel, Pantlind Hotel began in 1913. In 1925, it was called “One of the 10 Finest Hotels in America.” Decades later, the hotel underwent serious renovations. The rebirth of the hotel as Amway Grand Plaza is credited for revitalizing downtown Grand Rapids.

What kids will like there: The grand lobby of the original hotel is stately and has a fountain that draws kids in. However, it’s what in the newer tower that is the biggest hit: The pool area. There are two hot tubs, and access to a rooftop area to play tennis, corn hole, and ladders.

What’s nearby: This hotel is nicely situated in the downtown area, within a short drive (or if you’re ambitious), within walking distance to several museums including Grand Rapids Public Museum, Grand Rapids Children’s Museum and Grand Rapids Art Museum. There are also a few great (family-friendly) breweries nearby. 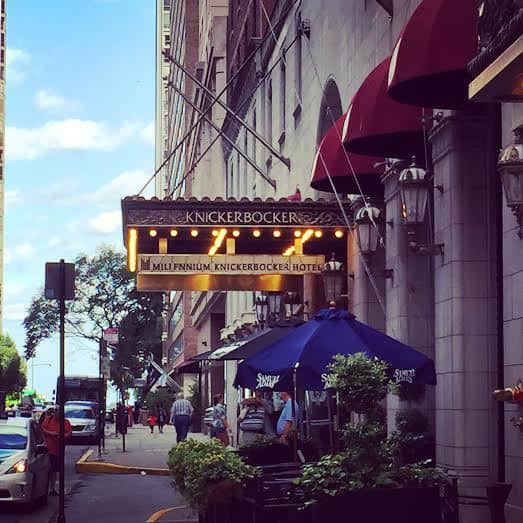 What makes it special: Originally opened in 1927, the Millennium Knickerbocker has maintained quite a bit of its 1920s elegance. During Prohibition, Al Capone’s brother Frank ran a speakeasy in the Knickerbocker and the stairwell the patrons scurried down during a raid still exists which is a fun element.

What kids will like there: Kids will love discovering the historic elements of the hotel making it pretty unique compared to more modern hotels. Kids have quite an eye for finding things like mail chutes that are not in modern hotels. If you have the opportunity, take a peek inside of the Crystal Ballroom. The crystal chandeliers, gold gilding and light up dance floor are awe-inspiring to all ages! Melissa, who recommended this hotel, said her daughter was totally in awe during our visit and felt like a princess.

What’s nearby: While staying at the Millennium Knickerbocker, you will be a block away from the excitement of Michigan Avenue! Nearby Water Tower Place is home to American Girl, the Lego Store, the Chicago Sports Museum and more. For older children, the Museum of Contemporary Art Chicago includes a rotating range of uniquely engaging exhibits some even with participatory elements. Of course, fun Navy Pier with its amusements and incredible view is nearby as is the Chicago Children’s Museum!

Read more about Millennium Knickerbocker in this post by Melissa from A Little Time and A Keyboard. 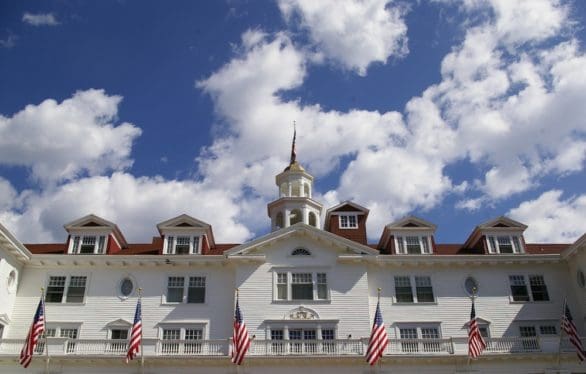 Beyond the hauntings, there are many reasons to visit the historic Stanley Hotel. Photo courtesy Megan Bannister

What makes it special: While the Stanley Hotel is arguably most famous for its haunted happenings, its rich backstory and role in Estes Park’s development are equally fascinating. The hotel welcomed its first visitors in 1909 and helped spur much of the development of the town of Estes Park—it was even the first hotel west of the Mississippi River to have electricity.

What kids will like there: The Stanley Hotel has lots of nooks and crannies to explore! The original elevator and the hotel’s movie memorabilia are especially fun.

What’s nearby: There’s lots to see in the town of Estes Park. From shopping to restaurants, there’s something everyone is sure to enjoy. The hotel is also close to Rocky Mountain National Park, which is the perfect place to opt outdoors and explore all of the natural beauty Colorado has to offer.

Read more about Stanley Hotel in this post by Megan from Olio In Iowa.

What makes it special: Opening with an elegant New Year’s Eve gala in 1908, the hotel continues to celebrate New Year’s in style with an annual celebration. The first luxury hotel in Boulder, it is now on the National Register of Historic Places. Over the years, well-known politicians, entertainers, and other public figures—including Louis Armstrong, Robert Frost, and Helen Keller—have stayed at the hotel.

What kids will like there: Kids will enjoy riding in the original Otis elevator, sipping fresh water from the Arapahoe Glacier at the lobby drinking fountain, seeing the beautiful and colorful stained glass ceiling in the lobby, and seeing relics from years gone by on the self-guided history tour around the hotel.

What’s nearby: The Hotel Boulderado sits in the heart of downtown Boulder, only a short walk from the pedestrian-friendly Pearl Street Mall full of shopping and dining. Tea-drinking families can go on Celestial Seasonings’ free factory tour or sip afternoon tea at the Boulder Dushanbe Tea House. Boulder is also a very bike-friendly city, so families can rent bikes and peddle the Boulder Creek Path. Sitting at the foothills of the Rocky Mountains, Boulder also offers visitors plenty of opportunities to get outdoors.

Read more about Hotel Boulderado in this post by Erin at The Epicurean Traveler.

Why go there: The Hotel Julien is a historic landmark hotel that is not only decorated in the highest quality of finishes, but the small high-end touches will make any guest feel extra special.

What kids will like there: Kids will love the views of the Port of Dubuque from their room along with the impressive swimming pool in the basement. Ice cream across the street will make any kid happy too!

Read more about The Hotel Julien in this post by Katy from Katy Flint & Co. 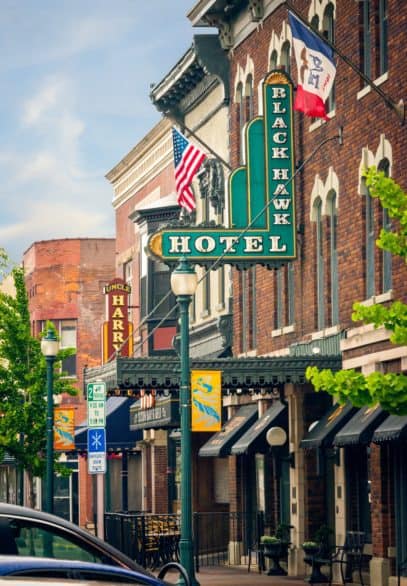 Why go there: Built in the 1870s, it retains its old world charm with new world amenities.

What’s nearby: Kids and adults alike will love the John Deere tractor museum in the nearby sister city of Waterloo.

Read more about Black Hawk Hotel in this post by Cindy from Traveling Adventures of a Farm Girl. 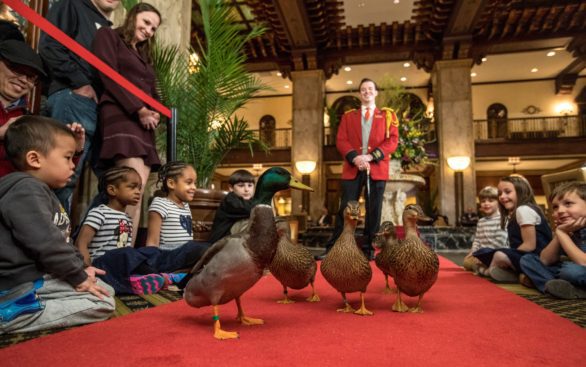 What makes it special: In 2019, Peabody Memphis celebrates 150 years in business. It is THE place to stay in Memphis, and has hosted celebrities, royalty and American presidents. The rooms are luxurious, and the location can’t be beat. Thursday night rooftop parties offer the best view in town, plus live music, good food and cool drinks.

What kids will like there: Kids are the VIP guests of the twice-daily duck march at the Peabody Memphis. Adults will have a hard time battling the crowds, but kids get to sit right along the red carpet as the ducks make their way to the lobby each morning, and each evening as they return to the penthouse duck apartment. Kids will also love the consistent duck theme throughout the hotel – from cookies to soaps, there are ducks everywhere!

What’s nearby: Beale Street is just blocks away, with live music and the best barbecue in Tennessee. You can walk to the Mississippi River for a paddleboat or kayak cruise. The Civil Rights Museum is also nearby. Downtown Memphis is very walkable, and the Peabody Memphis is centrally located.

Read more about the Peabody Hotel and things to do in Memphis in this post by Leigh from Campfires & Concierges.

Wentworth by the Sea

What makes it special: This Victorian wedding cake hotel was built in 1874 and once hosted the likes of Gloria Swanson, Annie Oakley, Harry Truman and Prince Charles, as well as being the spot where the terms were hashed out to end the Russo-Japanese War. But by the late 20th century, it had been long abandoned and looked more like a ghostly set in a horror film (it was: 1999’s “In Dreams”). Thanks to the joint efforts of a nonprofit and local hotel group, the Wentworth was restored to its former glory in the early 2000s and now boasts a 8,500-foot spa wing, indoor and outdoor pools, standalone suites overlooking the marina, a private country club and “Scottish links” style golfing, and chef-driven, sea-to-table dining.

What kids will like there: The hotel has both indoor and outdoor pools.

What makes it special: Arrow Hotel in Broken Bow has been primarily been a hotel since the building was constructed by the townspeople in 1928. Due to being apartments for a short time, the rooms are larger and all have kitchens. Parents will like the small town atmosphere and the small town prices for all of that space. Everyone will like the delicious home style breakfasts.

What kids will like there: Many are suites which means multiple televisions. This worked well for a family with two tweens and two teens who could all watch their own type of show.

What’s nearby: Across the street, there is a wonderful playground and the Custer County Museum where there is a display on one of America’s most prominent pioneer photographers. The hotel is right on the town square which has numerous local shops. The hotel also has its own restaurant which has a separate pub area.

Read more about Arrow Hotel in this post by Gretchen from Odyssey Through Nebraska. 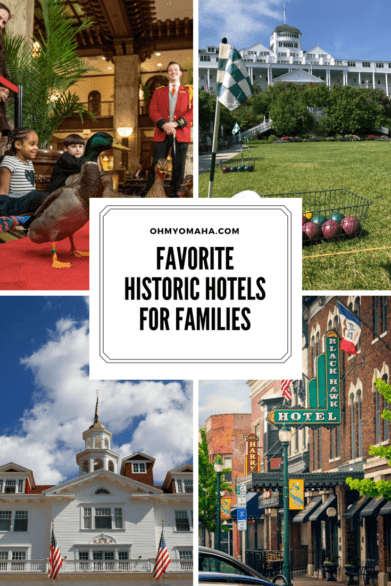 Previous
Star Wars And The Power Of Costume Next
Staying at Amway Grand Plaza With Kids
Click here to cancel reply.