There’s a new airline in Omaha, a discount carrier that flies us directly to vacation destinations. Right now, you can fly Allegiant Air to Florida (arriving at to St. Petersburg/Clearwater International Airport near Tampa) and soon they’ll offer flights to California (arriving at Oakland/San Francisco Airport).

Raise your hand if you like direct flights. High five.

Allegiant Air offered to fly me and my family to St. Petersburg/Clearwater International Airport in exchange for telling you all about it. 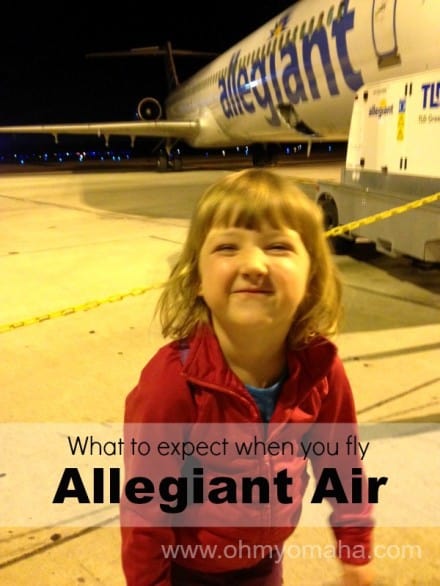 Here’s the deal, it’s cheap and convenient to fly Allegiant from Omaha directly the Tampa Bay area, but there are indeed a few catches.

Mr. Wonderful likened it to a hostel. There are certain things you have to accept as part of the deal of a hostel. There are “extras” you’ll have to pay for if you want them at a hostel, like having your own bathroom, right? Don’t complain about how a hostel works just because it’s not like a hotel. Same goes for a budget carrier. Just accept that the lower price means that certain things are “extras.”

So back to those catches…

No. 1. Most things are extra and you’ll have to pay for them. You get one personal item to carry on like a small backpack or purse at no cost, but any other carry-on and all checked luggage is additional. So, just accept that you’ll have to pay a little more so you can bring clothes.

I have a sister-in-law planning a girls getaway with a friend to Clearwater Beach and after comparing prices with other carriers, even with the added fees, the ticket with Allegiant ended up being cheaper.

No. 2. Your seats are randomly assigned at check in. We were traveling with two small children so we were paired two and two. Our two pairs, however, were not randomly assigned next to each other. No big deal. But if it is to you, you’ll have to pay $12 per person to move seats. Want to move your seat assignment to a window? Pay $12.

Side note: Go online starting 24 hours before your flight to check in online. Print your boarding passes at home so you can avoid the $5 fee to have the airline print them out the day of your flight. Plus, checking in early gives you more flexibility with seating.

No. 3. There are only two flights to and from Omaha each week – Thursday and Sunday. We took a Thursday to Sunday trip. It’s a nice length for a quick getaway, but man, we left wishing we had more time there. There’s a lot to do!

Allegiant flies out of Omaha late Thursday mornings, arriving in Florida at around 3 p.m. Like most people on our flight, I had planned on taking advantage of the remainder of that day in order to get the most out of our Thursday to Sunday getaway. 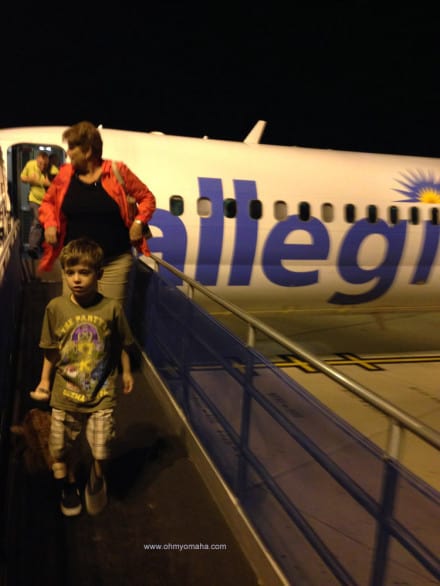 Unfortunately, the proverbial “stuff” happened. It was out of the airline’s control, but our Omaha flight was delayed. By, like, five hours. Maybe six. I stopped counting.

What happened? We were waiting for the Tampa flight to arrive, only it had experienced a weather delay compounded by a maintenance issue and the need to re-staff the flight.

I have to hand it to Allegiant. They set up a text alert with ticketholders so they can notify passengers ahead of time if their flight may be delayed.

I didn’t have the alerts set up initially, so we ended up at the airport for the original flight time and marveled at how short the wait was to check in. Well, most everyone else got that notification.

Anyway, I got it set up and we were able to leave the airport to pass some time in downtown Omaha.

Nothing like being stuffed between two carseats and impatiently waiting for vacation to start. My dad was carting us around Omaha and let’s just say my parents haven’t had to drive youngsters around for a while.

I could check my texts as well as AllegiantAir.com to see what the inbound flight status was.

Tip: If you have kids and have a long wait at the airport, the Omaha Children’s Museum is a short distance away.

Our flight ended up being delayed even longer than anticipated, so we did have to spend some time waiting at the Omaha airport.

Allegiant took care of all of us passengers, though. They set up a courtesy table of free beverages and then handed out meal vouchers. 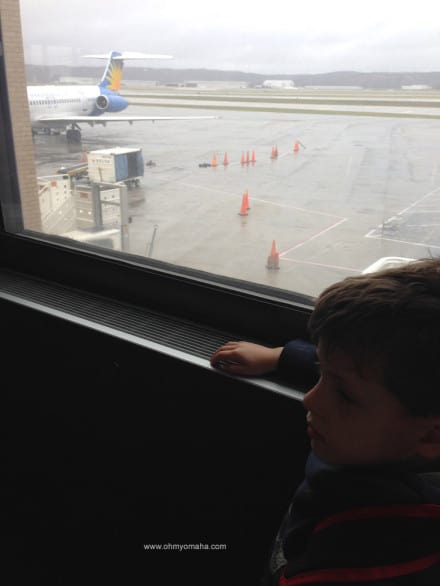 Waiting eagerly to board our plane.

Some people did lose their cool – if they were planning quick trips like me, they were losing valuable vacation time. I had to cancel dinner reservations and neglect to tell my kids there was a pool at our hotel because that was going to be our Thursday entertainment.

So we waited. Incidentally, this was about the time of day we all had planned on being in Florida. I bet some planned on already being sunburned or drunk by 3:04 Omaha time.

Those losing their marbles were passengers, not anyone with the airline. I watched airline personnel be very accommodating with people. One family traveling with a toddler asked if there were any open seats for him – they’d intended on him sitting on their laps but after the wait, they knew he’d need a chair to sleep on. Allegiant found some unoccupied seats on the flight and let them move without charging for that extra seat.

In spite of the delay and some frustrated passengers, our crew was cheerful and kinda funny. I like happy flight crew, but the perkiness wore on other passengers after the long day.

They offered in-flight snacks and beverages at a cost. I had packed snacks and filled up our water bottles, so that didn’t matter. I recommend that route, saving your money for rum drinks. Right?

There was no in-flight entertainment – you had to bring your own portable devices if you wanted music or a movie. No wi-fi, either.

By the time we arrived, patience had worn a little thin. The wait for our luggage felt like a long time, mainly because everyone was up way past their bedtime.

You aren’t technically arriving in Tampa, though you’re close to it. St. Petersburg/Clearwater International Airport is, obviously, closer St. Petersburg and Clearwater, and the other smaller, beachy towns. If your main plan is to hit the beach, opt for a hotel in either of those cities. 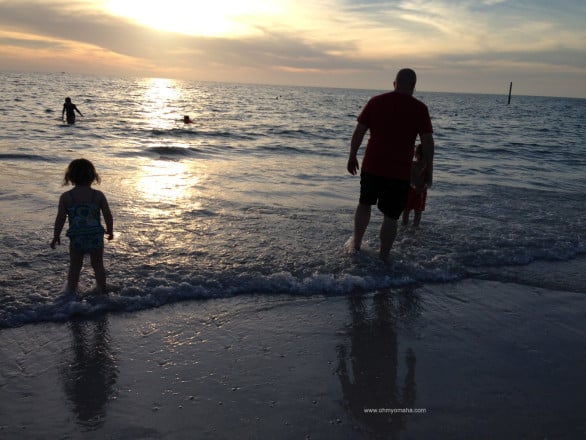 Tampa isn’t far, but it’s still a 20- to 40-minute drive depending on traffic. We arrived late and had to get a rental car, so by the time we hit the road, it was 10-ish.

The nice thing about this airport is that several rental car agencies have cars parked on-site at the airport, so it’s easy to walk out of the airport and to your car. It’s also quick and easy to return the car.

Flying back to Omaha

St. Petersburg/Clearwater International Airport is smallish, but don’t be fooled. It’s a tourist destination and a lot of people head home on Sundays. Don’t arrive as if you’re catching a flight out of Omaha – allow plenty of time for check in. 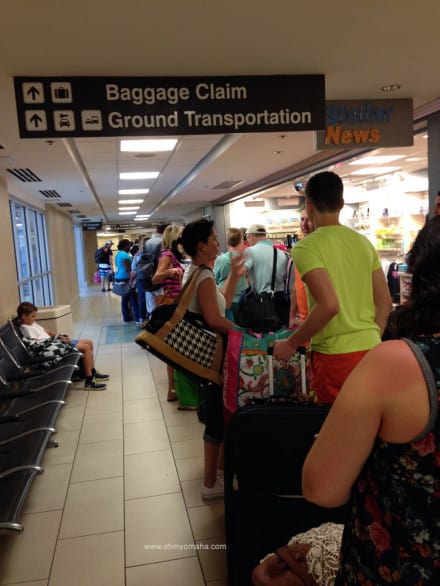 Where did all these people come from?!

We arrived late for our return flight – a puking kid, an unplanned bathroom stop and a stop to fill up gas in the rental car will do that. By the time we were at the airport, there was an incredibly long line for the Allegiant counter.

Ticketing agents hustled people on our Omaha flight to a separate, shorter line and we made it onto the plane with minutes to spare. Whew.

Would I recommend Allegiant?

Heck yeah. I consider two things when booking a flight: Which flight is the cheapest and which one gets us there the fastest. Nonstop flights trump all else.

If you’re on a budget, you can’t beat a cheap ticket for a direct flight to a tourist destination. If you like a little pampering, or you like knowing your entire trip cost up-front, look for a different carrier.

And FYI, Allegiant partners with more than 20 of the most popular hotel properties in the Tampa Bay area, provides low-cost car rental service through its partnership with Alamo Rent a Car and offers great deals on local activities. Omaha travelers can book their entire Tampa Bay vacation for less by visiting Allegiant.com.

Thinking of flying your family to Tampa? Check out my two-day itinerary for Tampa Bay! We crammed a lot in, which I actually wouldn’t suggest. Mix and match my recommended places to see:

If you L-O-V-E food and pampering, read my post about Epicurean Hotel in the beautiful Hyde Park area of Tampa.