It’s never too early to introduce theater to your kids. Here are some things to consider when you’re ready to bring your bundle of joy – or ball of energy – to the theater:

Age Appropriateness – Or Does it Matter?

If a performance has an age recommendation, note it, but don’t necessarily live by it. You know your kid best. The Rose is great about listing the age range for their shows, and it’s good to know; however, I’ve taken Farley to a few shows that were considered “best” for slightly older kids, and he still got something out of it. When I started taking him to plays and musicals, he was 2. He was a mellow 2-year-old, though, with a good attention span. Good, but typical, so anything longer than an hour was pushing it. He made it to the end of three hours of “Shrek The Musical,” but not without several trips to the lobby and bathroom. 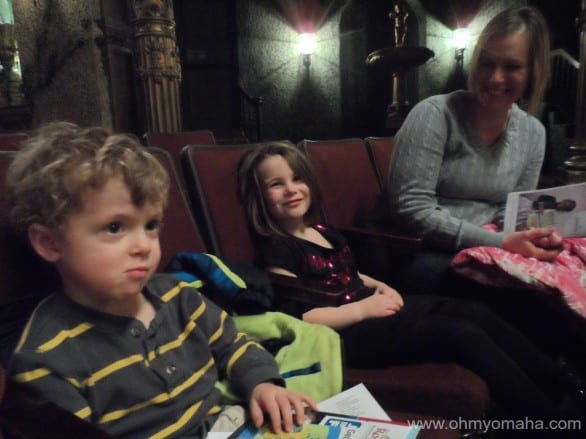 Taking your child to see live theater can be a lot of fun – pick a show everyone will enjoy.

Going against my rule, if something is recommended for teens and older, or there is a parental advisory, you should pause before bringing your preschooler. I’m not saying don’t do it, I’m just saying there’s an advisory for a reason.

Explain appropriate behavior before you’re even in the theater. Explain when it’s OK to talk or get up, and when we’re expected to clap (after a song, for instance). If a show is designed with kids in mind, talking during the performance is probably fine, and interaction is often encouraged. Let your child know when most people go to the bathroom (naturally, be ready to go during the most exciting part of the show). If you can, get that potty break done before the show starts. Another note, most venues have booster seats. * If you’re a member of The Rose, you can download the “Going to the Rose Guide” for each production and use it to talk to your kids before you go to one of their shows.

You’ll have to buy a ticket for your child, regardless of his or her age. Even if you are planning on having Junior sit on your lap, he needs his own ticket. They probably will make an exception for an infant, but don’t quote me on that.

Most theaters frown on bringing food and drinks into the theater. The Orpheum Theater and Omaha Community Playhouse are the exceptions – in fact, they sell things for you to take into the theater. The Rose sometimes sells food during intermission, but don’t try to carry it back to your seat. Will you get kicked out for bringing something from home? Probably not. Any outing with a toddler requires emergency items. I know you have to have an arsenal of distractions, and I’m not above filling my purse with animal crackers and a sippy cup if it means there will be no high-pitched outbursts.

There are no hard rules on what length is recommended for an age group. Before he had turned 3, I’ve taken Farley to one-hour shows and I’ve taken him to a three-hour Broadway show. Know your kid. I have yet to take Mooch inside a theater. She’s a lot more, how do you say?… spirited. I prefer outdoor venues or loud shows where no one will notice her grunts. She’s also not even 2, so I don’t feel like she’s behind.

I can’t praise The Rose enough for offering a good variety of shows for children. Their season has many one-hour shows that are just bearable for toddlers, and captivating for any kid older than that. They have longer shows, too, that I’d say grade-schoolers will get the most out of. Their end-of-the-season productions are pretty grand and impressive.

Where to Look for Your Kid’s First Show

– Omaha Performing Arts has the Family Series with shows that start a little earlier than typical shows (some are even in the afternoon). They also offer a Kids Night On Broadway discount – buy one, get one free – for one performance in the Broadway season each year. It may not be an ideal “first show,” though since I stated before, Broadway shows can be lengthy.

– As you can guess, I’m a fan of The Rose Theater, and you can’t go wrong with the shows this professional theater company puts on for the young ones. They aim for a diverse lineup, so know that if you buy season tickets, some shows are going to appeal more to ‘tweens and teens. They’re still great to bring younger kids to, but they deal with issues that older kids identify with.

– Omaha Community Playhouse’s season usually has a show or two each season that are suitable for kids. OCP has a couple annual shows that are kid-friendly, especially the holiday tradition, “A Christmas Carol.”

Omaha has a booming live theater scene with lots of community theaters. By all means, consider one of their shows for your child’s first show. I just picked three I know and can vouch for. There are also tours that pass through town for one-night-only productions. I can’t vouch for how great they are (I brought two nieces to a musical featuring Clifford the Big Red Dog and it was unbearable; we left at intermission). You’ll see shows sponsored by Disney or Nickelodeon come through the metro, and regardless of the production quality, if your kid is a fan of whatever show is being done “live,” he or she will love it. So take them!

One final note: Don’t underestimate your children. Bring them to shows you want to see, not just shows you think they want to see. A show can be kid-friendly even when doesn’t have “children’s theater” in the show description. So, don’t dumb down your child’s theater experience because you think that’s what he or she will understand best.

When I interviewed The Rose Theater’s artistic director, Matt Gutschick, a couple weeks ago about the 2013-2014 season, I asked him to pick shows in the season he’d recommend as great first-time shows for kids. He picked one for younger children and one for the older set. His picks: The season opener, “Knuffle Bunny,” for the really young; and the second show of the season, “Robin Hood,” for older children. Both are only 60 minutes long.