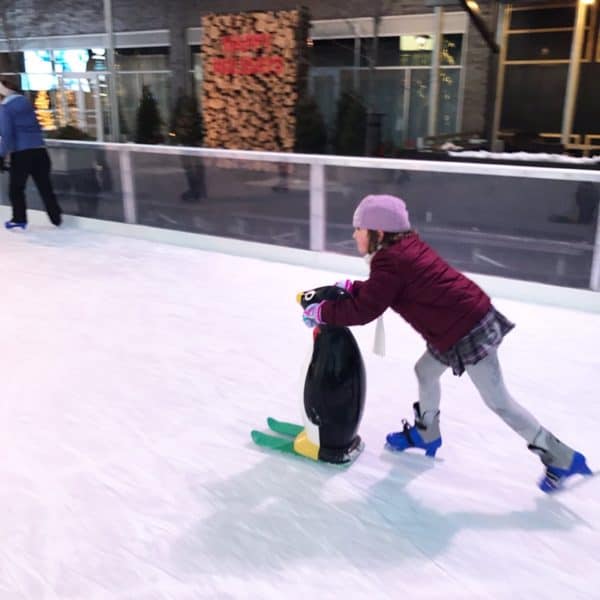 From outdoor skating to skating on ice named in honor of a hockey legend, the Omaha area is home to several ice skating rinks that allow open or public skating on a regular basis. Rent skates or bring your own, ice skating is a blast! Here’s a breakdown of Omaha’s favorite ice rinks.

The Capitol District Ice Rink opens its season Dec. 6 and offers outdoor ice skating through Jan. 21. Located near the Marriott hotel, bring your own ice skates and enjoy time on artificially cooled ice.

While you’re there, look for figure skating teams, which sometime perform short acts for visitors. A portion of the admission fee is donated to Shine the Light on Hunger, which helps fund the Food Bank of the Heartland.

The ice rink is perfectly situated in the Capitol District, so you and your family can grab a quick bite at any of the area restaurants, including DJ’s Dugout and Lighthouse Pizza.

Where to ice skate in Midtown Omaha

Motto McLean Ice Arena honors its namesake’s love for the ice by offering family specials, which include skate rentals, ice time and a drink. You can also bring your own skates to the Omaha Parks and Recreation arena on South 45th Street.

Motto McLean was a Canadian hockey player whose professional career brought him to Omaha, where he was a member of the Knights minor league team. He lived in Omaha for several years.

Note: The arena is currently closed due to a leak under the ice. It will reopen as soon as possible.

The rink, which is located between 40th and 42nd streets and Dewey and Emile streets, allows you to bring your own skates.

Note: The ice rink is outdoors, so it closes if the wind chill drops to zero degrees.

Omaha’s newest indoor ice skating facility, Grover Ice Arena offers public skating in addition to its hockey and broomball leagues. Bring your own skates or rent theirs for a nominal fee.

You’re sure to have a fun time skating on the ice at the former Scoco Supply building, near 60th Street, off of Interstate 80.

The Ralston Arena is home to the Omaha Lancers juniors hockey team. The Lancers have long been a power in the United States Hockey League. The arena has also hosted the Curling World Cup in 2018.

Ralston Arena also hosts open skating for the public throughout each month. You’ll want to check the arena’s website for dates and times, as well as admission fees. Bring your own skates and enjoy an hour or more on the ice.

The Moylan Iceplex offers more than 1,500 hours of open skating for the public. Skate rental is included with your admission.

While you’re spending time at the ice rink, grab refreshments or something to eat at their concession stand.

Requiring a state park permit or a daily pass to enter, Mahoney offers an opportunity to enjoy a day outside skating and then checking out other activities at the park. The rink does have a $2 admission fee and skate rentals are $3 per person.

The season runs from early December through March. After spending time on the ice, you may want to check out sledding, ice fishing or cross country skiing.

Related post: Guide To Mahoney State Park In The Winter

From outdoor skating downtown at the Capitol District to enjoying a leisurely skate at West Omaha’s Moylan Iceplex, Omaha is home to some fun and outstanding ice skating rinks. Strap on your blades and have a fun skate around town.

However, if you’re looking for more things to do when the weather gets cold, check out this list of 30+ Things To Do In Omaha In The Winter.

Tim Trudell is a freelance writer in Omaha, who cowrites The Walking Tourists blog with his wife, Lisa. Together, they have authored “100 Things to Do in Omaha Before You Die” and “Unique Eats and Eateries of Omaha.” He has also written articles for the Omaha World-Herald and Omaha Magazine.