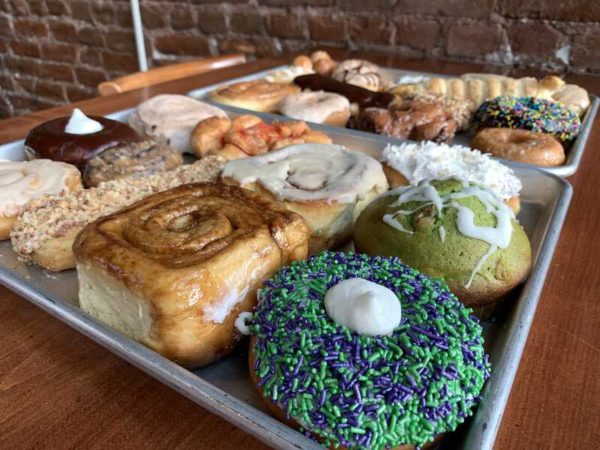 Nebraska might not have an official donut trail like Ohio, but we have some excellent donut shops (or is it doughnut shops?). I created this post to feature donut shops throughout Nebraska, in large cities and small towns. And, because I’m inspired by that Ohio donut trail, I created my own version of a Nebraska Donut Trail at the end of the post. Enjoy!

Why some Nebraska donut shops didn’t make the list

The criteria to be on this Nebraska list included A) the donut shops needed to be locally-owned shops and B) they needed to sell donuts, obviously. In some cases, the bakeries were more famous for other pastries (and I’ll point those out later), but still, donuts have to be available at the bakery in order to be included.

In cities that had more than one locally-owned donut shop, I used two methods to decide on which to include.

For Omaha, I went with my favorite since I have compared the options (and there are a lot of great options). I’m more of a traditional donut fan, so cake donuts without a lot of frills are my favorite, and thus, Olsen Bake Shop was picked over something like, say, Bob’s Donuts.

In Lincoln, I looked at various review sites plus this story about Lincoln donut shops. Since websites kept ranking a chain as the top donut shop, I selected the highest ranking locally-owned shop.

Side note: I nearly included all the Daylight Donuts that popped up in a few Nebraska towns. But, it’s a chain, and not even a Nebraska chain, so please don’t point out that the lone donut shop in your town was left off this list if it’s a Daylight Donuts.

Where to find great donuts in Nebraska

Ready to explore the state one donut shop at a time? Here are some of the best places to find donuts in Nebraska! Whenever possible, I included fans’ feedback on the bakery.

So, if you are a fan and want to chime in about your favorite bakery, leave me a comment.

Bluffs Bakery is owned by Ron Ahlers, Sr., a master baker, and Chris Ahlers. The bakery’s Facebook page said Ron was one of the first 500 certified bakers in the United States. Two other bakeries on this list are connected with the Ahlers (Gering Bakery and Rolling Pin Bakery).

What readers say: Jessica H. said both Gering Bakery and Bluffs bakery both have cute cookies and an assortment of cakes and donuts but that Bluffs bakery has a larger assortment of cookies, bagels, and muffins, and so many donuts doughnuts. “Bluffs also had Italian sodas (not great) and other breakfast and lunch items.”

About: To be honest, not much is out there about this bakery in Norfolk. From what I can see in photos, though, this donut shop sells giant donuts.

What readers say: According to Jill T. “I can’t be in Norfolk without stocking up on Delight donuts!!! Best donuts and most amazing owners! Definitely a Norfolk staple! Nothing beats seeing that pink box on the break room table.”

About: Gering Bakery, along with Bluffs Bakery and Rolling Pin Bakery, is owned by Ron Ahlers, Sr., and Chris Ahlers.

What readers say: Amanda C. grew up in Gering and said “The Gering bakery has delicious donuts and cookies. They also make absolutely incredible cabbage burgers! 🤤 I miss that bakery!”

Katie M. puts it simply: “I love the Gering Bakery!”

About: Located not too far from Omaha, Jim and Connie’s Blair Bakery has a lot of fans here. They sell more than donuts, including pfeffernusse at Christmas time.

What readers say: Jim R. has childhood memories at the Blair bakery and said they have the best glazed donuts. “I always recommend to friends and coworkers to stop by there and get a glazed donut when they are in the area.”

Kelli K. is a big fan, too. “Love love love Jim and Connie’s in Blair!!!! Get the donuts, long johns, bear claws, okay there isn’t any of their pastries that are not delicious. I’ve had co workers in Omaha offices specifically request jim and Connie’s donuts they are so good!! Get there early on Friday, though – it is Blair tradition the high school kids bring donuts to share in homeroom on Friday.”

And, the bakery’s donut holes gets a recommendation from Katie W. “Jim and Connie’s glazed donut holes are one in a million. My coworkers from Omaha request for me to stop quite often and they are never disappointed!”

About: Not much is out there about this small town bakery, other than they have the most unique of offerings (I’ve seen the picture): A glazed donut man.

What readers say: Jessica H. said her visit was rather disappointing at Kimball Bakery, but she did let me know they had a cute glazed man.

About: Kimmel Orchard has been around since 1925. Being an orchard, the draw is all-things-apples. So, obviously, you get the apple donut.

The apple donuts are made fresh every Monday, Wednesday and Friday (seasonally).

What readers say: Maureen Q. said “Best donuts ever!! It’s been too long since I’ve had them.”

About: It’s easy to miss this donut shop just south of the Old Market – it’s a true hidden gem. Olsen donuts are fresh and no frills, just great tasting. It’s near the zoo and botanical gardens if you want a place to walk off the donut calories.

Dan H. agreed, saying “They’re the best I’ve ever had, period. Try other donuts when I’m out of town and nothing ever compares.”

About: Randy’s competes with a popular regional chain with Nebraska’s only location (ahem, Hurts Donuts). However, from the reviews I’ve read online, Randy’s has a following.

According to the Lincoln Journal Star “Another family-owned local establishment, Randy’s lauds freshness, hand-made quality and cost as indicators of its success. Staff member Amanda Ryan said that Randy’s price of 85 cents for a doughnut is the lowest in town. Options include the ever-popular original glazed raised doughnut as well as other raised options and multiple cake doughnut choices.”

About: The Rolling Pin Bakery is the third of the Ahlers’ great bakeries in Nebraska. Learn more about their approach to baking in the Bluffs Bakery “About” section.

Am I missing a hidden gem of a donut shop in Nebraska? Leave a comment and let me know!

About: Rosie’s is more than only a donut shop – it’s a full deli. A lot of fan reviews online point out that not only is the food great, it’s all reasonably priced.

About: Sehnert’s has been around since 1957 and run by the same family. While this is the place to go to try the famous bieroc of Nebraska, it’s included on this list because they also have tasty donuts.

It’s worth pointing out that this is the lone Nebraska bakery that can say they have a James Beard America’s Classic Award, which they earned in January 2019.

What readers say: Want donut recommendations? Stacy W. has a few. “Sehnert’s is an institution in my hometown. Anytime people come back to town this is a must stop. For donuts the sundae donut and apple fritters are a big draw. My personal favorite item are the peanut butter brownies.”

Monica J. pretty much convinced me that I need to try one of everything off their menu. Here’s what she said about Sehnert’s: “The buttercream frosting is the BEST! I remember my mom ordering cakes from there ever since I was little ❤️ I’ve found no buttercream that compares. With that being said, the chocolate Sundae is freaking the best ever. Also- the cream horns are to die for. Every Holiday season they also make Stollen bread- ridiculous. I can’t even explain the goodness that happens in your mouth after eating a piece of warm Stollen from the oven. I’ve never had anything like it. You can just taste all of the homemade goodness.

“Another item I’ve ordered since I was young is the Delaware Doughnut! It’s a cheese and sausage filled “doughnut”- no icing. 🤤🤤 And last- the bieroc (runza). I order dozens of these to take home. There’s just nothing like the homemade “bread” flavor. I personally LOVE the hamburger/cheese/sauerkraut. I can’t eat Runza’s runzas because I grew up on these and they’re that good.”

About: This long-time bakery celebrated its 100th anniversary in 2017 – and it’s stayed in the family (current owner Clayton Replogle is the great-great-grandson of the original owner).

According to the Beatrice Daily Sun “The donuts, the bread, the cakes, the puddings and creams: everything but the fruit filling is made from scratch in the kitchen.”

What readers say: Samantha M. brought Sunrise Bakery to my attention. She said “My family loves their rolls and when we moved away whenever we visit our grandparents we stop in to get their buttered rolls and donuts!”

Amanda V. agreed, and said “Still trying to find a place in Omaha that even comes close to comparing!”

About: Verdigre, Neb., is billed as the kolache capital of the world. Soooo, here’s a bakery where you’re probably better off ordering what they’re famous for (kolaches).

But, this is a donut list, so fear not, Verdigre Bakery has donuts.

What readers say: I didn’t get a lot of reader responses about donuts here because – big surprise – kolaches kept coming up.

Beth L. said “We love the kolaches at the Verdigre Bakery!!”

While kolaches are their specialty, Andrea N. said she prefers to order the rohliky there (and if you’re curious, Andrea said the kolaches made by the Methodist church in town during Kolache Days are the best). “Rohliky is the thing at Verdigre’s bakery. I get that every time I go back. … Donuts are good there too! But I nearly always just get rohliky.”

LeAnna B. is another one who has a preference to kolaches made elsewhere (her in-laws’ recipe). She was disappointed with the kolaches there. “I had much higher hopes than what we ate from the bakery.”

About: Like any great Nebraska bakery, Wahoo Bakery sells cakes, cookiesand rolls in addition to donuts (and of course, kolaches).

Check ahead of time to see what their donut of the month is. They’ll sell the specialty flavor on Saturdays.

Now that you’ve got a list of Nebraska donut shops, why not go visit them? Grab a map and loosen your belts, I created a donut trail for the state.

The Nebraska donut trail starts and finishes in Omaha. The round-trip nature of the trail allows for people to start at any point. The route I have mapped out is a little more than 1,200 miles.

Here are your stops:

Many bakeries on this list are known for something other than donuts. It’s forgivable if you show up at one of them and buy something else to eat instead of a donut. I won’t tell anyone.

7 thoughts on “14 Great Places To Get Nebraska Donuts”