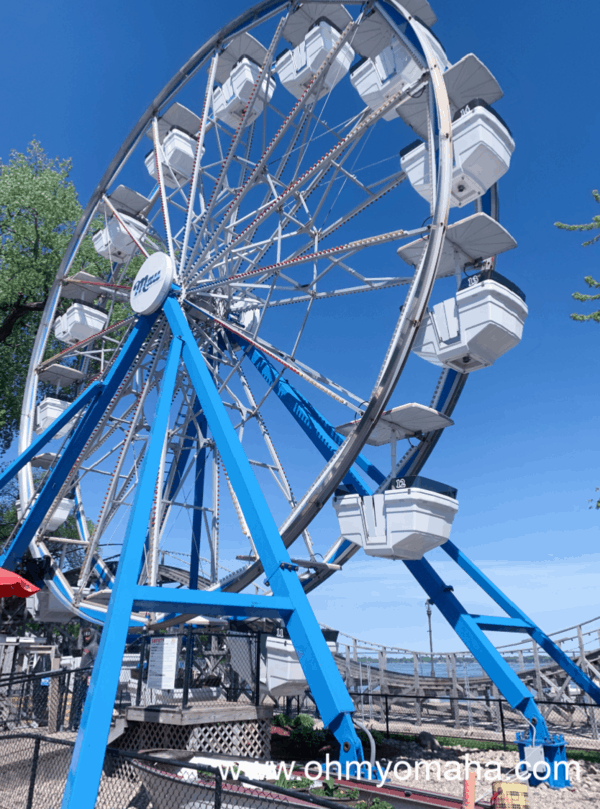 Arnolds Park Amusement Park is a nostalgic gem in the heart of Iowa. This historic attraction has played a lead role in memories for many people in Iowa and Nebraska who’ve vacationed in Okoboji. I’ve never been until I became a parent, but now I can finally check it off my list.

Want to plan a visit with your family? Read on for my tips on the park, plus all the important things you need to know about Arnolds Park should you be planning your first visit.

Disclosure: My visit was hosted by Vacation Okoboji and I received complimentary passes. All thoughts, opinions and typos are my own.

What is Arnolds Park?

First off, let’s make sure we’re all on the same page about Arnolds Park. There is the town of Arnolds Park in north central Iowa and then there’s Arnolds Park Amusement Park. The amusement park is commonly referred to as Arnolds Park, though.

The amusement park dates back to its first water slide into West Lake Okoboji in 1889. Its most famous ride, the wooden roller coaster called The Legend, opened in 1930. Still in operation, it’s the seventh oldest wooden roller coast in the U.S. and the 13th oldest in the world.

Today, there are about 24 rides and attractions at Arnolds Park Amusement Park. It’s on the small end of amusement parks but I think that’s what adds to the charm. You’re not exhausted by the visit.

Plus, it’s FREE! Well, technically it’s free, but if you want to ride any rides, you’ll need to get a wristband. More on that below.

My kids will tell you everything is a gem there. However, there are some hidden gems you should seek out during your visit.

Right outside the amusement park and right in front of a line of souvenir shops, you’ll find Harmony Park. The park has several musical instruments to play.

If your child has sensory overload from all the rides, this is a nice place to sit and chill out. It’s rather calming to play the xylophone and bells.

You may have seen pictures of the huge Arnolds Park slide. My husband remembers the slide from his childhood. It’s no longer in the amusement park itself, but you can find it nearby.

The slide is located inside the Arnolds Park Museum (which I found by going through the Maritime Museum). Because we had day passes to the amusement park, we could ride the slide as much as we wanted.

Both museums are interesting to wander around, but good luck doing that with young kids. Most will be more interested in the slide or going back to the amusement park.

When I visited, my kids were ages 7 and 9 and that was, in my view, the start of ideal ages to go. They were tall enough to go on all of the rides, including the thrill rides.

And they were small enough to not feel too self-conscious if they wanted to go on kiddie rides. It was perfect!

If your children are younger than grade school age, there are fewer rides for them. But, you don’t want to skip some of the non-ride attractions like the Mirror Maze and the Tipsy House.

Tip: For the best views of the West Okoboji Lake, ride either the Ferris wheel or The Legend.

The hours vary, with the peek operating hours being in June and July. Starting the Friday before Memorial Day, the park starts opening daily at 10 a.m. The closing time varies between 7 to 10 p.m. Check the calendar to plan your visit.

If you want a tip about timing the visit, let me tell you, we went on the Sunday before Memorial Day and it was great! The summer crowds hadn’t arrived yet, so we had minimal waits for rides.

In fact, for my kids’ two favorite rides, The Legend and the Rock-O-Plane, they were able to stay seated and ride a few times before having to exit.

Like most summer tourist attractions, weekends are going to busier than weekdays.

Admission is offered by day pass and season memberships. Day passes are $29.95 if purchased online and two-day passes are $49.95.

Tip: The Sunset Pass is only $24.95 and is good for rides during the last two hours of the day.

You can choose to get some add-ons to your day pass, such adding a ride on the Queen II boat or get the Ultimate Pass that includes a $10 food voucher and $20 in game tickets.

Tip: From experience, the Queen II boat ride is tough for young kids to sit through. The excitement dies down after 3 minutes and then you have about 57 minutes to spend trying to entertain them.

Tip: Not totally unrelated to the previous tip…the Queen II does have a bar. For the kids. I mean, you can get soda and popcorn or candy for the kids. And maybe something for yourself.

The only thing not included with the day pass or membership are the Raceway rides on the Family Track and Slick Track. The Family Track requires riders to be age 9 and older. The Slick Track has the height minimum of 54 inches tall.

Also, if you don’t have a season pass or a day pass, the slide at the Arnolds Park Museum is $1 per ride.

Since you can come and go from Arnolds Park Amusement Park whenever you feel like it, there is the option to leave the park. We left twice during our day there to get food.

Tip: I recommend getting ice cream at Nutty Bar, an iconic ice cream stand located across the street from Arnolds Park Amusement Park.

My visit was a bit early for all the summer events Arnolds Park Amusement Park has each year, but you can plan your vacation to coincide with some great (and sometimes free) events!

Among the events are:

– Live at the Lake: A free concert series at Arnolds Park Amusement Park. These are held on select weekend nights all summer long. Concerts start at 7:30 p.m. at Preservation Plaza.

– Jazzed Up Big Band: Tuesdays from mid-June to mid-August are nights for swing music at Arnolds Park. Music is performed by a 16-piece band.

– Movies at the Park: Every Wednesday night is a different free, family-friendly movie screening. They start at sunset at Preservation Plaza.

– Rock The Roof: Thursday nights are set aside for music and dancing, starting at 6 p.m. Cost is $8 or $15 per couple. Season passes are available.

Want to plan an Okoboji trip for your family? Start with this guide to Okoboji in the summer (with kids) and get more inspiration from my Iowa Bucket List.

Coming soon! I’ll go into details of some of our favorite things in Okoboji in these posts:

1 thought on “Everything You Need To Know About Arnolds Park”