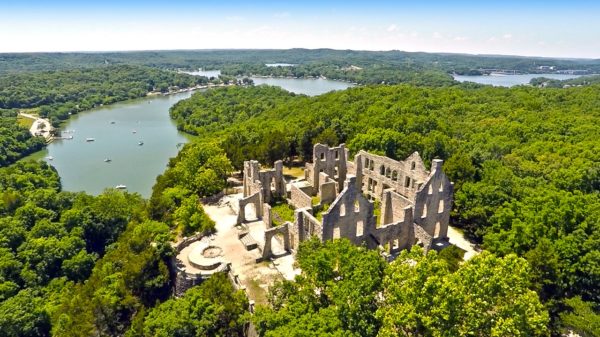 Missouri is a state I feel like I’ve only just started to explore – though I’ve spent a great deal of time in Kansas City and St. Louis. I’ve started thinking about a road trip through the state – where I’d stop if I had no time limit, no money limit, and let’s be real, no day job. That’s how I’ve come up with this Missouri bucket list.

You may think I’ve left off some key things, and that’s cool. Let me know what shouldn’t be overlooked!

You won’t find much St. Louis and KC items on this bucket list, because, well, I’ve made those lists already. Same with Excelsior Springs (if it’s not on your Missouri bucket list, add The Elms right this minute).

Dive through a mine

For this bucket list item, I’m going to have to learn to dive first! The Bonne Terre Mines look like a surreal experience – you’re pretty much scuba diving through an old mine. National Geographic Adventure named the diving experience one of the top 10 adventures in America.

If I never learn to dive, there’s always an option of a boat tour.

The National Tiger Sanctuary, just north of Branson, is home to rescued large cats. There are different types of tours to help the public learn more about the animals, but the one that sounds like a bucket list item is the chance to feed one of the cats.

There’s also a behind-the-scenes tour that I could see my daughter loving.

Missouri has more than 5,000 caves, with the most “show caves” in the country. Some that I think merit a visit: Onondaga Cave (claims to have the largest cave living room in the world); Fantastic Caverns in Springfield (home to the only ride-through cave in the U.S.); Marvel Cave (located inside Silver Dollar City and is said to have been discovered by Osage Indians in the 1500s); and two caves in Ha Ha Tonka State Park, Robber’s Cave and the Counterfeiter’s Cave (rumored to have been hideouts for outlaws).

The largest of the commercial caves is Meramec Caverns.

Step back into time

My son is fascinated by historic sites, so a trip through Missouri wouldn’t be complete without stopping at a few historic homes. In Diamond, we can set George Washington Carver’s birthplace and see where nature first inspired him as a boy.

Independence might be another stop for us in order to visit the Truman Home, a small home of Bess and Harry S. Truman. I’m on the fence about that one since you can only see it by guided tour, and my kids have a 50-50 track record of dealing well with guided tours.

I’m obsessed with waterfalls (probably because we have so few in Nebraska). Some of the Missouri waterfalls I’d love to see include Rocky Falls near Eminence, Mo., and Crooked Creek Falls in the Ouachita National Forest. Both of these are in the Ozarks.

Missouri Life has some of the most picturesque waterfalls here.

And while I’m on the topic of waterfalls, let’s talk about a natural waterslide. Water flows over smooth boulders at Johnson’s Shut-Ins State Park, making it a perfect place to cool off. Because of it, it’s one of the most popular state parks in the Ozarks.

My husband planted the idea in my mind that we should canoe the Current River long ago, and I still think about it. Its crystal clear water and gorgeous scenery sound great. The Current River is just one of a couple rivers that are part of the Ozark National Scenic Riverways.

The other rivers are the Eleven Point and the Jacks Fork (so I guess I have some options). Together they are Missouri’s largest national park. There’s a hidden swimming hole that I’d love to see called Bluff Hole, located where the Jacks Fork River widens.

Go to the drive-in

They’re a dying breed, aren’t they? 66 Drive-In Theatre in Carthage is seasonal and said to be the last on this famous highway. This isn’t the only drive-in in Missouri, FYI.

I could go to Sunset Drive-In Theater in Springfield and feel like I’ve stepped back in time to the 1950s.

Near the Current River, there are for-real ruins. Apparently, there isn’t a good address for Welch Spring Hospital Ruins, so I found this post that gives some good directions (just scroll down midway through the post). Ha Ha Tonka State Park, near the Lake of the Ozarks, is home to castle-like ruins, too. Ha Ha Tonka sounds totally amazing.

According to “Missouri Off The Beaten Path,” “The complex of caves, underground streams, large springs, sinkholes, and natural bridges at Ha Ha Tonka State Park makes it one of the country’s most important geological sites.”

Stay in a treehouse

The River Of Life Farm is a resort in the Ozarks with treehouse-like cabins. The beauty of the place is it is in the heart of the Mark Twain National Forest. I personally want to go hiking or canoe, but they are also known for having excellent fly fishing.

I confess to already doing this, but it’s on this list since I feel my kids should experience having a hot roll chucked at their heads, too. Lambert’s Cafe is in two towns in Missouri (the original is in Sikeston, the other is in Ozark). Expect huge portions along with a wait if you go.

One of these days, I’m going to plan a weekend trip along the KATY Trail with my husband, stopping for a winery or brewery along the way. It’s flat, it’s scenic, and at 237 miles long, it’s the nation’s longest “rails-to-trail” project. So, um, maybe we’ll just bike part of it.

This post in Southern Living has inspired me, though, especially about the B&Bs along the route. One that sounds great is the H.S. Clay House (it even has a pool and hot tub). And we’ll need to eat while we’re doing all this biking. Apparently, bikers in-the-know know to stop for some grub at Cooky’s in Golden City.

Hidden somewhere in a Mennonite community in Lake of the Ozarks is Charley’s Buffet, home to Mennonite-cooked and -served food that has people lining up every Friday and Saturday night.

Route 66 passes through Missouri including through the entire Ozarks. I read about a few places to visit just off the historic highway. There’s the scenic Devil’s Elbow, with nearby barbecue joint Elbow Inn and 40-foot-high wooden railroad trestle bridge. Then, there’s Lebanon, where the Route 66 Museum and Research Center is located.

Missouri has a lot going on, in terms of wine, in the southeastern part of the state. This includes towns of Defiance, Marthasville, New Haven, and Hermann. Hermann has 10 wineries in the area as well as a couple microbreweries and distilleries.

The town has several popular festivals like and Wurstfest and Maifest in the spring and Octoberfest in the fall. It is home to Stone Hills Winery which was built in 1847 and, up until prohibition, it was the second largest winery in the U.S. My friends in St. Louis tell me Hermann is the place to go but I wonder if the smaller down they might have overlooked are with visiting too.

Stay in a caboose

Staying in a caboose is going to keep popping up on my bucket lists for states until I stay at one. I’ve come across a couple in Missouri. Cozy Caboose is located at the St. Louis West KOA campground on Route 66. And this one isn’t your ordinary caboose. It’s decked out with a kitchen, queen bed and bunk bed, and more importantly heating and Wi-Fi.

There’s also a place off the KATY Trail called Cruces’ Cabooses B&B with two cabooses for lodging. They come fully-equipped and are nestled in the woods.

Randy’s Roadkill BBQ and Grill in Rolla intrigues me. Even though I’ve heard there is no actual roadkill on the menu at the restaurant, I feel like I have to go and see for myself. And then by the T-shirt.

Mastodon State Historic Site has a pretty interesting story behind it: The first evidence of mastodons were discovered there. And it almost didn’t become a public park – it took a group of persistent housewives to stop the archeological site from being sold to developers.

According to the book “Missouri Off-The-Beaten-Path, ” four women fundraised and pestered state officials until it became a state park.

Walk on a swinging bridge (or two)

Southwest Missouri is home to two swinging bridges that are just about 1,000 feet apart from each other. Grand Auglaize Swinging Bridge and Mill Creek Swinging Bridge are near Brummell. There are two near Osage Beach as well, though I read they were rather rickety.

Like my fascination with caves, I’ve got an inexplicable interest for swinging bridges.

Clinton’s, located in Independence Missouri, is a legit old-timey soda fountain complete with the marble counter the uniformed soda jerks. This is where Harry S Truman got his first job. I think I’ll order a malt when we’re there.

Have a 19th-century meal by candlelight

Fort Osage National Historic Landmark is known for historical re-enactments. I could see visiting the fort during the day with the kids and then at night, return for an authentic 19th century dinner and entertainment hearthside in the factory’s dining room.

I’d heard about wild horses of North Carolina, but I’m surprised to know that there are herds in the Midwest, too. Missouri is home to herds of wild horses in Shannon County. They been roaming for more than 100 years and include the Broadfoot herd, Grassy herds , and Shawnee Creek herd.

The Ozarks are is home to several festivals throughout the year, including the Hillbilly Fair in Laurie. The one that intrigues me the most is the Osage River Rendezvous and Mountain Man Festival held the third weekend in September.

Here people dressed in period clothes re-create what it was like when fur traders and other early pioneers would gather to socialize, barter, trade and, perhaps, throw a knife or two.

There is a group of Trappist monks in an abbey deep in the Ozarks near Ava. The Assumption Abbey has a bakery where they make more than 30,000 fruitcakes annually. I’m not a fruitcake fan but I hear they’re delicious (and also 2 pounds each).

Hike by the Elephant Rocks

Just look at that picture of the boulders at Elephant Rocks State Park in Belleview! Don’t you also want to see them in real life? These huge granite boulders that were formed more than a billion years ago. The largest rock in the park is 25 feet high.

One of these days I’m going to stay at a dude ranch. Blame it on “City Slickers.” Missouri has an option – Bucks and Spurs Guest Ranch. Families to stay here and do hands-on work at the horse and cattle ranch.

I’ve read about Dogwood Canyon Nature Park near Lampe. This nature preserve in the Ozarks is the work of the founder of Bass Pro Shops. I’ve seen pictures and it’s quite picturesque.

I’d love to take a bike tour around it, though there are also options of taking a guided horseback or tram tour.

I’ve been pinning ideas I’ve found for months, more than could fit on this list. Check out my Missouri Road Trip Board for additional travel inspiration for the Show Me State: