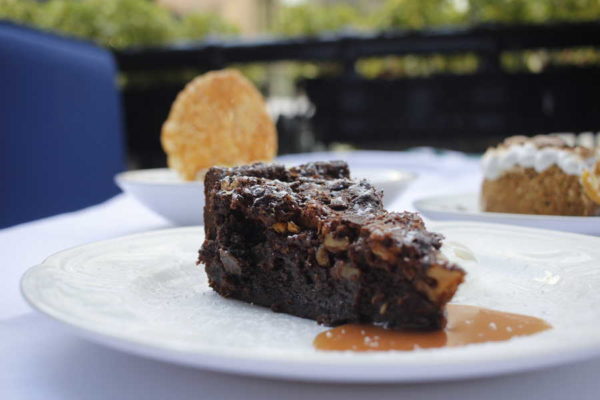 We visited Chicago during the holiday season, and being the kids’ first time in the city, we wanted to go to restaurants to sample some typical Chicago fare, as well as get some unique experiences. Our kids are ages 7 and 9, so I’m coming from the perspective of someone with fairly young, but pretty well-behaved, kids. Here are the highlights:

Dinner at the Tortoise Supper Club was, hands down, the most memorable meal for us. Think: White table cloth, attentive servers, and if you’re there late enough on the right night, live jazz music. It doesn’t sound like it’s a place to bring kids to, but it was. Our waiter, Sergio, was particularly kind to the kids.

As guests of the restaurant, we had quite the experience. However, it’s important to note that there is no kid’s menu here (so no lower prices for smaller appetites). Your kids would have to order from the regular menu. One of our kids ordered a cheeseburger, the other went for steak.

I tried the French onion soup, which was delicious and the kids liked, too. My entree was a special, the short ribs. We were there on Saturday night, which is prime rib night.

Dessert was so good. We tried the chocolate tortoise (because, you know, it’s the Tortoise Supper Club) and key lime pie. No kidding, key lime pie is the thing to get.

The Tortoise Supper Club is within walking distance of the hotel we were staying at, Loews Chicago.

I’d read about Macy’s Walnut Room in Chicago, how it was a grand restaurant inside a department store. When it first opened in Marshall Field, it was the first of its kind. And I’d read about it being decked out for the holidays, so I decided we’d brave the crowds for diner on Black Friday.

Apparently, everyone was done shopping for the day by the time we went, because we had a very short wait.

The dining room was impressive, with a large Christmas tree stealing the show. People stopped by the restaurant just to get pictures in front of it.

You could get the buffet or order off the menu, and since I’d wanted the famous chicken pot pie, I skipped the buffet and ordered that instead. It was a good idea. The restaurant also had a kid’s menu.

While we waited for dinner, fairy princesses wandered the dining room, granting wishes to children. It was totally unexpected, so I don’t even know if this is a regular thing or just on the weekends or what. But, it really added to the experience, especially for my daughter.

I’ve asked friends in Chicago and the Twitterverse for suggestions on where to get good Chicago pizza. The consensus was that no one could agree. So, we ended up going to the place I hadn’t been to before: Giordano’s. There are several locations in the city, and we ended up at one not too far from The Field Museum.

It was pretty good, but I’ll be honest, Chicago-style pizza just isn’t my kind of pizza. It’s a lot of crust for me. My kids weren’t enthused about it as I had expected, either.

I’ve also had Gino’s East on previous visits, and the décor there makes it worth a visit in my book.

I love breakfast and enjoyed three great breakfasts during our visit. We tried Do-Rite Donuts one morning. This tiny shop always had a little line, and it’s easy to see why. The huge donuts are fresh and delicious. In order to try a few flavors, we split three. The birthday cake and red velvet coconut were my favorites.

We also ordered chicken sandwiches, just to have a little something to keep us satiated. If you’re from Omaha, I’d say the donuts were better than Bob’s Donuts, but I can’t say the same for the chicken sandwiches.

Another memorable breakfast that was within walking distance of the Loews Chicago in the downtown area was Wildberry. We went to the Wildberry near Millennium Park.  The wait to eat at the restaurant on a Saturday morning was, indeed, wild. We opted for outdoor seating and only had to wait 30 minutes.

Yes. Outdoors in November. It worked, though.

The food was really good and filling. The coffee was also exceptional. There is a kid’s menu, too. Items for kids included silver dollar pancakes for $4 or specialty pancakes for $5 (including fresh berry pancakes, Fruity Pebble pancakes, and Oreo s’more pancakes), one egg meal for $5, and a few lunch offerings. Juice or soda are included with that price.

Being near Millennium Park, be sure to walk over to see “Cloud Gate,” AKA The Bean.

And, if the kids are really loaded up on sugar from pancakes at Wildberry, walk a little further to Maggie Daley Park. It might be the most incredible park you’ll ever visit. It’s huge, and it should wear your kids down.

Our other breakfast was in Rosemont, Ill., at The Ashburn. The Ashburn is located inside Loews Chicago O’Hare Hotel, and we were guests of the hotel there. For breakfast, you can order off the menu or get the buffet. The buffet had a lot of options, many of them healthy, but we opted to order of the menu. I had house-smoked salmon, which was light and really good. Coffee was also delicious.

The Ashburn had a kid’s menu, and the fluffy buttermilk chocolate chip pancakes were pretty filling for the kids. I sampled them and they get my approval. Breakfast prices on the kid’s menu ranged from $4 for a fresh fruit bowl or oatmeal, to $7 for bacon and eggs, waffles, pancakes or french toast.

One thing to note about Loews Hotels like the one this restaurant is located in: They source a lot of food and drinks from local businesses. It’s a program called Flavor by Loews.

6 thoughts on “Dining With Kids In Chicago”