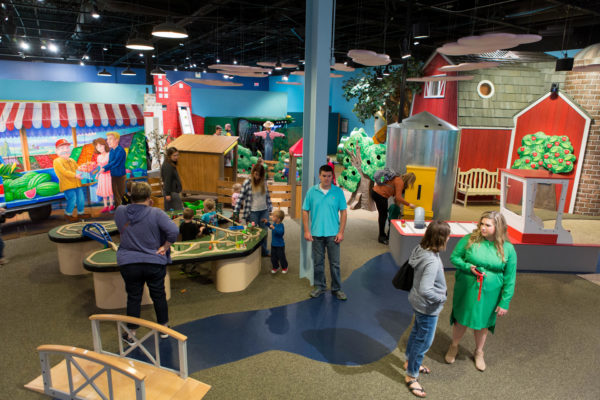 Our trip to the Quad Cities in eastern Iowa and western Illinois was supposed to be a fun getaway, including some beautiful fall scenery. Think autumn things like pumpkin patches, nature hikes, and changing leaves along the Mississippi River. Due to rain — so much rain — our weekend was spent mostly indoors, though. No problem since there are plenty of fun things to do in the Quad Cities that are indoors, including exploring kid-friendly museums and eating an embarrassing amount of ice cream and pancakes.

Disclosure: Our visit was hosted by Visit Quad Cities. All thoughts, opinions and typos are my own.

The Quad Cities, if you’re unfamiliar, consists of Betterndorf and Davenport in Iowa and Moline and Rock Island in Illinois. The Mississippi is the natural divider for the states and cities. They’re proximity to each made it feel like one large city with small-town atmospheres.

For a family-friendly getaway to the Quad Cities, here are some of my suggestions:

My kids are 7 and 9 years old, so they they’re starting to age out of children’s museum-type experiences (hands-on) but still love anything that’s play-based. Here’s where we went in the Quad Cities.

A mix between science center and natural history museum, Putnam Museum in Davenport was a big hit for my kids. It’s large and families could easily spend an entire afternoon here. My kids enjoyed the science center, mummies, and walking through the river exhibit featuring the animals, flora and fauna found along the Mississippi River.

I loved playing with the kids in the augmented reality room where you could see yourself on screen with dinosaurs.

Tip: If you’re a member of Omaha Children’s Museum, you get admission for four FREE at the Putnam Museum thanks to the ASTC reciprocal membership program!

I was impressed with the massive Figge Art Museum in Davenport. We were there to see the new traveling exhibit, “French Moderns: Monet to Matisse,” as well as glimpse at some of the permanent collection. Catch the traveling exhibit while you can, as it was impressive.

The museum also is known for having one of the largest collections of Mexican Colonial artwork outside of Mexico City and is one of the first U.S. museums to have a Haitian art collection.

My kids spent most of their time in the newly remodeled Family Art Center on the second floor of the museum. It was a space to draw, build, and try on costumes. It’s perfect for all ages.

If you go to Figge, you’ll be block away from the Davenport Skybridge. It’s a walkway from a parking garage that leads you to a neat lookout over the Mississippi River.

We went during the day, but I’ve seen pictures of the Skybridge at night and the interior is lit up with colorful lights.

Family Museum in Bettendorf was one of the museums we were not originally planning on visiting, but rain washed out our outdoor plans so this became our substitute. I’m glad we did!

Consider this museum like a children’s museum with a very creative and fun pretend space filled with a farm, grocery story, Mississippi bridge replica, veterinarian clinic, post office and more, plus a large water table and maker space.

Its total exhibit space is small compared to Omaha Children’s Museum, but you can easily spend a few hours playing just in the one room I mentioned above. And if your kids love the role playing, the Family Museum is hard to beat.

We went upstairs to the clay studio before leaving (there is also a separate art studio upstairs). The make-and-take air-dry clay is free to play with and take home. For a few dollars, though, you can make something on the pottery wheel. It’s not a great option for visitors like us since that clay needs to be fired in a kiln and picked up a week later.

Tip: If you’re a member of Omaha Children’s Museum, you get admission for four FREE at the Family Museum thanks to the ASTC reciprocal membership program!

On the Illinois side of the Quad Cities, we went to two other attractions that happen to be FREE. Both could be about an hour-long visit depending how into tractors or rocks & fossils your family is.

The Fryxell Geology Museum is a few museum on the beautiful Augustana College campus in Rock Island, Ill. Leave a few minutes on your visit to explore the campus before or afterward.

The museum’s small but it’s easy to spend an hour here. See if your family can get a guided tour because the enthusiasm of the guide is going to be contagious with your family.

Susan brought out fossils for the kids to touch like fossilized poop and a shark’s jaw.

They’re testing out an augmented reality app, too, and my kids loved seeing the fossils “come to life” in pictures and video with the museum’s iPad.

If you’re exploring on your own, there’s a scavenger hunt card game.

The museum’s biggest draw is the Cryolophosaurus, a 22-foot-long dinosaur fossil discovered by an Augstana College professor. It’s the first-ever dinosaur fossil found in Antarctica and it was a previously unknown dinosaur – so a doubly exciting discovery.

Don’t skip the small exhibit in back behind the black curtain. There are fluorescent stones back there.

Where: Fryxell Geology Museum, 820 38th St., Rock Island, Ill. Just a note: Finding a parking spot near the museum was difficult as we went when college was in session.

Moline is home to the world headquarters of John Deere, and so it’s no surprise there’s a place to learn about the history of the company and glimpse at the future. The John Deere Pavilion is a great place to explore with kids as there are several huge farming equipment for them to climb on, as well as an interactive kids area.

The kids area is small but it held my kids’ attention for a long time, especially video editor and the stop-motion video table.

Adults even got in on the fun, especially with the simulators.

Where to eat in the Quad Cities

This weekend getaway to the Quad Cities was extremely over-indulgent and if you’re on a diet, skip this part.

Breakfast is my favorite meal on vacation. The two I’d recommend are local institutions, and expect a wait if you go.

QC Coffee and Pancake House in Rock Island, Ill., is known for their cinnamon roll pancakes. So, we had to get one, right? We also tried the specials there – both plates were heaping with food. Mine was particularly colorful with a variety of fresh fruits and prepared vegetables. It’s all about balance when you also order a large pancake.

The kids got Mickey Mouse pancakes, and again, too much for one kid to finish.

Jimmy’s Pancake House in Bettendorf, Iowa, is again, known for pancakes. They were fluffy and prepared just the way I like them. The perk of this restaurant, if you ask my kids, is the toy they gave them after the meal.
This restaurant is very close to the Family Museum.

Lagomarcino’s has two locations in the Quad Cities and we went to the quaint original in Moline, Ill. You could walk to it from our hotel, Element, which is convenient.

Logamarcino’s is a century-old confectionery and ice cream shop with a deli thrown in for good measure. We ordered sandwiches, fully knowing we’d be splitting one of their famous sundaes afterward. They make their own ice cream and hot fudge.

This place is pretty charming and you’ll be tempted to buy candies and treats before leaving. I promise.

There are two locations. We dined at the downtown Moline, Ill., one. The second location is in the Village of East Davenport in Iowa, and that little area is absolutely charming.

Our other lunch was at Steel Plow Burger Co. You’d think you’d go here for the burgers (and those are good), but you’re really going because you want one of the over-the-rim milkshakes. These things are monstrous concoctions that must be shared.

We split a brownie shake, which had little brownie bites and donuts on skewers, M&Ms and marshmallows along the bottom, and delish fudge dropping from the top. Four of us could not finish it.

How could we go to the Quad Cities and not have one of the pizzas that Food & Wine wrote about this year? We went to Harris Pizza (there are several locations, so we went to the one in Rock Island). The pizza is sliced in long strips rather than your typical triangle slices. Crisp bottom, thick crust and ample toppings, with just the right amount of sauce. All around, it was a great pizza.

There are several breweries in the Quad Cities, and I asked around for a few suggestions of family-friendly breweries so that I could try local beer without feeling out of place while on a family vacation. Bent River Brewing Co. in Moline was short walk from our hotel, so we decided to have dinner there one evening. While we were the only ones with kids there, we were welcomed.

There was a kids menu and several games to choose from while we waited for our dinner. We played Sorry and Jenga. The food was typical pub food, and the beer was exceptional. I tried their most popular beer, Uncommon Stout, and my husband ordered a seasonal sweet potato beer. The seasonal was so good, we bought a growler to take home.

Where to stay in the Quad Cities

Our hotel, Element Moline, was on the Illinois side of the Quad Cities, but given the proximity of the cities to each other, I don’t know if you can choose wrong when deciding which city to stay in.

I’ll be visiting a few more Quad City hotels in the next month and can report back to you on why you’d choose one of the Quad Cities over the other depending on your itinerary.

But, back to talking about Element. You may be familiar with the hotel chain by Marriott. It’s a sleek hotel, and this one in Moline has such a cool look. It reminded me of loft apartments in Omaha’s Old Market, blending brick walls, cement, and modern furniture.

The hotel had one of the best complimentary breakfasts I’ve seen at any hotel when traveling. There was someone preparing hot food made-to-order (pancakes on the weekend and two egg white options on the weekday). The fresh fruit and yogurt bar were healthier options I appreciated. My kids, on the other hand, liked the cereal bar and pastry varieties.

Most important to traveling families, it has a pool. Our room was shower-only, so that was a drawback for my kids. I’d say, overall, this hotel would appeal more to business travelers than families, while still being pretty family-friendly.

The hotel is within walking distance to the John Deere Pavilion, as well as the TaxSlayer Arena. It’s also near a bike trail along the riverfront, and the hotel has complimentary bicycles if you have time to explore.

I’ll be sharing more in-depth posts about some of the places we visited in the Quad Cities in upcoming posts. Check back to learn more about:

Where To Stay In The Quad Cities – Illinois Side

Free Things To Do With Kids In The Quad Cities

Comparing Hotels Around The Quad Cities