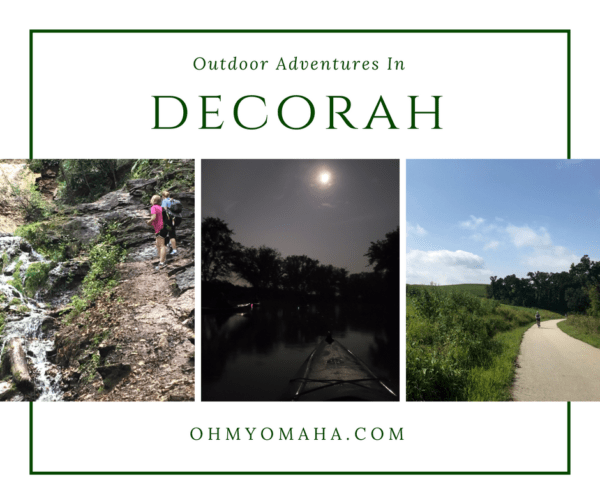 I wanted a weekend getaway this summer that included being active and seeing beautiful scenery. And I needed it to be drivable from Omaha. My choice? Decorah, a small town in northeastern Iowa tucked in the Driftless Area of the Midwest.

Disclosure: My stay was hosted by Visit Decorah and I partnered with Karst Adventures for the outdoor excursions. All opinions, thoughts and typos are my own.

When I started planning my weekend to Decorah in northeast Iowa, I had two things on my agenda to see: Dunning’s Springs and the Upper Iowa River, which I had seen included on a National Geographic list of the 100 Greatest Adventures in America. After seeing it on that list, how could I not go there?

While it’s quite easy to have a family-friendly getaway to Decorah, this time around, it was a kid-free, girls weekend for me. To make the most of having just 48 hours in Decorah, I partnered with Amber from Karst Adventures to guide my group through a bike ride and moonlight float down the river.

I’m a sucker for a good waterfall on vacation. This 200-foot waterfall is right in downtown Decorah in Dunning’s Spring Park, and so easy to get to. There is parking available, but you can do as we did, too, and simply bike to it.

Wear decent climbing shoes if you’re going to attempt to go up the waterfall. The water is cold and we saw children playing in the stream.

There are stairs, making an easy route to get to the top of the falls. The park has trails, including mountain bike trails. This was just a quick stop for us, so we didn’t explore beyond the waterfall.

While you’re there, check out the stone arch bridge. It was designed to be similar to one that was there more than 100 years ago, and the interesting thing is that no mortar was used to build it.

Our group consisted of three women of varying abilities, and none of us had experience on mountain bikes, so the awesome mountain bike trails in Decorah were out of the question. We opted for tackling Trout Run Trail, a paved loop of about 10 miles that rides along the Upper Iowa River through cornfields, and past the fish hatchery and bald eagle nest.

With Amber as our guide, we learned about the terrain the Driftless Area is known for, including the fascinating algific talus slope in the limestone walls where we could feel a cold breeze coming from the rock.

Driftless Area, in case you were wondering, is a region in the upper Midwest, that had glaciers.

She was a good motivator for us, warning us of lengthy inclines and how to handle the switchbacks in the cornfields. And, she knew where exactly to look for the famous bald eagles nest in Decorah.

With pit stops to rest, and one to feed fish at the hatchery, our ride took up nearly the four hours of our rental.

Where to get your bikes: Amber met us at Decorah Bicycles, where we rented hybrid bikes for a four-hour span. In case you’re wondering, there are also mountain bikes and kids bikes available there.

The entire Trout Run Trail may be too difficult for young children, especially with some of the hills. They were a little grueling for us. If you do want to try it with kids, you can do an out-and-back from the bicycle shop to the fish hatchery. It’s flat (and you can look for the bald eagles nest while you’re out there).

The location of Decorah Bicycles is convenient. It’s near the Trout Run Trail, first of all. But, it’s also a short ride from the waterfall at Dunning’s Spring Park. If you’re comfortable riding on the street, it’s easy to tack on a visit to the falls before getting on to the trail.

And conveniently, it’s near both The Whippy Dip and Pulpit Rock Brewing Co., so if you’re craving ice cream or beer after your ride, you’re covered.

If you don’t have a guide like Amber, it’s a good idea to check the water levels of the river before setting out on the Upper Iowa River. There are outfitters to rent kayaks, canoes or tubes. We got our kayaks from Off The Driftless.

We were fortunate enough to be in Decorah on a gorgeous full moon-lit night, so we had made plans to have a moonlight kayak float with our guide Amber, who runs Karst Adventures. The three of us in my group, again, had varying levels of kayaking abilities. We had all kayaked at least once, so we had that going for us. But it had been years for a few of us. If you’re going to do one of these nighttime floats, it’s pretty important to not be completely new to it.

Our group was picked up from Off The Driftless and shuttled to a launching point. After a quick refresher on steering and getting into a kayak, we were off. To be honest, it was both unsettling and incredibly peaceful. Visibility was low, especially with the fog.

It was an adventure, though, and engaged the senses. We were on high alert for anything in the water. We could hear beaver tails slapping the water, watch blue herons flutter away, and muse over the gang of geese walking in the water. The fog helped disguise us so animals weren’t so skittish.

My friends and I were unfamiliar with this river, so I would’ve appreciated having Amber as a guide in the daytime, but she was absolutely essential at night. The river was low in August, so we followed her to avoid shallow waters and fallen trees.

When I return with my family, I’ll be reaching out to Amber to help customize an outdoorsy itinerary. Her work has largely focused on introducing women and children to outdoor pursuits and skill building.

Plan a trip to Decorah

Read about our experience staying at the Fairfield Inn & Suites in Decorah, as well as all the great places we dined at in town. Norwegian Christmas desserts? We tried them. Wood fire on a farm? We went there. Here are my tips on where to stay and where to eat in Decorah

9 thoughts on “Outdoor Adventures In Decorah”