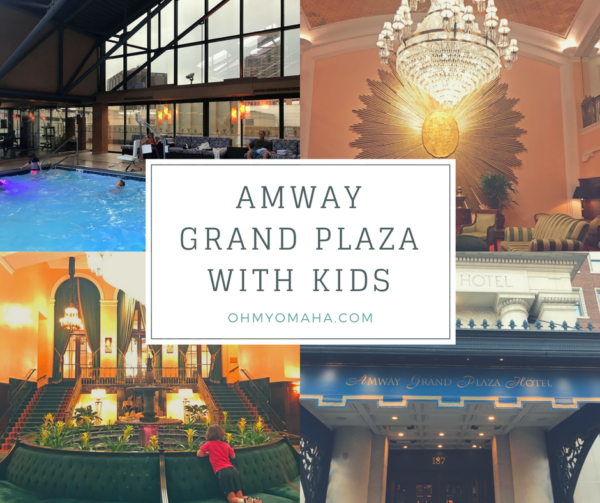 Disclosure: Our visit was hosted by Experience Grand Rapids. All opinions, thoughts and typos are my own.

What to expect at Amway Grand Plaza

Amway Grand Plaza has two sides to it: There’s a grand historic side and then there’s the modern luxury side. It really does feel like two separate hotels, where one tower (the tall, glass one) has modern amenities like the pool, outdoor tennis courts on the roof, and a restaurant by Wolfgang Puck. And on the other side (the historic hotel side), there are chandeliers, upholstered furniture, a fountain and dim lights.

When you check in, the lobby is modern, bustling and connecting the two sides. I mention this because I was envisioning entering the building and stepping back in time. Instead, I asked if I was in the right place.

Walk away from the modern lobby and you’ll step into the gorgeous lobby on the historic side. It’s dimly lit by grand chandeliers, and the centerpiece is a fountain.

The rooms at Amway Grand Plaza

There are options for rooms, and if it’s in the budget, you can opt for larger suites. We stayed in a room with two queen beds, which worked for our family of four. Understand that a room like that may feel small by modern standards.

The bathroom, though, is updated and modern.

One thing to note: If you’re staying on the historic side, and you’re traveling with kids, a pool visit is inevitable. Know that you’ll have to cross through the lobby and take a lengthy walk to the other tower. Bring a cover-up.

Kids and the Amway Grand Plaza

It’s understandable to even wonder if this would be a good hotel for families given the historic nature of the hotel. It definitely is. We saw many families passing through the lobby while we were there, and the pool was a happening place each night.

Related Post: Favorite Historic Hotels For Families In The U.S.

My kids loved the pool area, of course, and I enjoyed the hot tub. There are two hot tubs, usually, though one was closed while we were there.

If the weather had been nicer (and if I knew how to play), we’d take advantage of playing tennis there. How often do you get to play on a roof? There were other lawn games out there, too, like corn hole and that ladder golf game. I couldn’t get my kids out of the pool or we would’ve tested them out.

Adults will like that the fitness center also has locker rooms where the men can sit in the steam room and the women can enjoy the sauna.

As far as the rest of the hotel, both kids were fascinated by the Pantlind lobby, and wanted to take more photos than me. And just try to find me a little kid who isn’t fascinated by a fountain in a lobby.

The hotel has several restaurants ranging from Ruth’s Chris Steakhouse to a Starbucks. We didn’t eat at any of them, though my daughter and I did peek at the breakfast buffet at Rendezvous. It was very tempting but a little out of my price range for breakfast.

If you want to know where we had breakfast during our stay, read this post about our weekend in Grand Rapids.

What’s near the Amway Grand Plaza

One of the prime reasons to stay at this hotel is its location. It’s in a prime spot in downtown Grand Rapids, right near the river.

We would’ve walked to them if our kids were a little older and a little less whiny. 🙂

Parking is expensive in downtown Grand Rapids, and while you can self-park at the hotel, note that that is also expensive ($29 a night).

48 hours in Grand Rapids with Kids

4 thoughts on “Staying at Amway Grand Plaza With Kids”