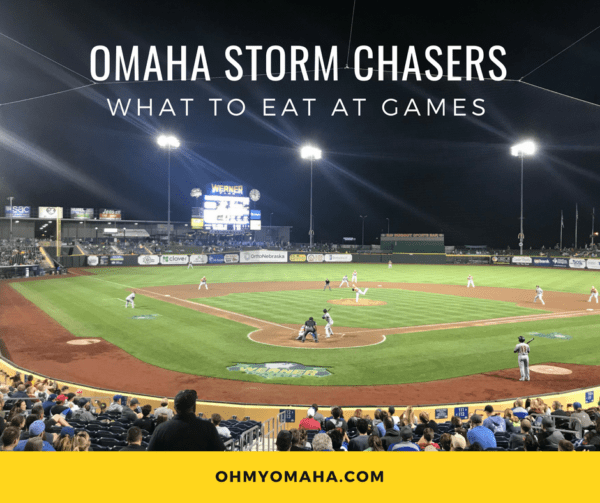 There’s about one more month left in the 2018 Omaha Storm Chaser anniversary season, so let’s talk ballpark food. All I want is a bag of peanuts at the game, so, I asked Storm Chaser fans to share their food tips so you know what to try the next time you’re at Werner Park. If you have a favorite food or suggestion, leave a comment and let me know!

Disclosure: This post is sponsored by Omaha Storm Chasers. Any thoughts, opinions, or typos are my own.

The most original suggestion came from Martie Cordaro, the team’s general manager and president. “Try the Brisket Egg-rolls at Sarpy Smokehouse paired with an #AleStorm beer; then the Pop Tart Ice cream sandwich at Swirls finishes the night.”

La Mesa’s stand has quite a few fans. Tiffany N. always gets La Mesa supreme nachos at the game. “Got to get the nachos at La Mesa with jalapeños. Then around the 7th inning you have to get the ice cream in a helmet.” tweeted @TheDunkKing. Megan S. tweeted “I usually go for the queso from the LaMesa stand. And a frozen strawberry lemonade.”

Another Nebraska favorite at Werner Park is Valentino’s, which has been around since 1957. Two replied on Twitter saying, “My son always has to have a slice of Valentino’s pizza and a Dippin Dots.” (@RoyalsCollector) and the other had the food and drink combo recommendation: “Cannot go wrong with some @valentinospizza and a @drpepper out by left field 👌” (@BallenB2013)

Looking to eat a somewhat healthy? I did receive one tip from a fan offering some options found at Werner Park: “Something nutritious and tasty. Burrito bowls, chicken sate, hummus dip with vegetables,” tweeted @Wanncook

My kids are happiest with a bowl of Dippin Dots, and they’re not alone. When I asked about desserts, @RoyalsCollector tweeted that it was what his son always got (along with that Valentino’s slice).

“My son loves the huge pretzels and cotton candy. Best dessert I think is the funnel cakes but (my husband) says Dippin Dots,” said Tiffany N. on Facebook.

“My son loves making his own green sno-cone with the syrup machine over between 3B & LF,” said Megan S. on Twitter.

To get the most bang for your buck, pick a game on one of these promotional nights with food deals:

This isn’t a promotion but an annual event:

Peanut Free Night – The Storm Chasers host their annual Peanut Free Night, with a thorough cleaning of the ballpark prior to the evening’s game. No peanut products will be allowed into the park or sold for that night’s game. This year, it’s held on Aug. 1. I’ve got more Storm Chasers fan tips here, including their suggestions on parking, getting ticket discounts and what kids can do at the ballpark.