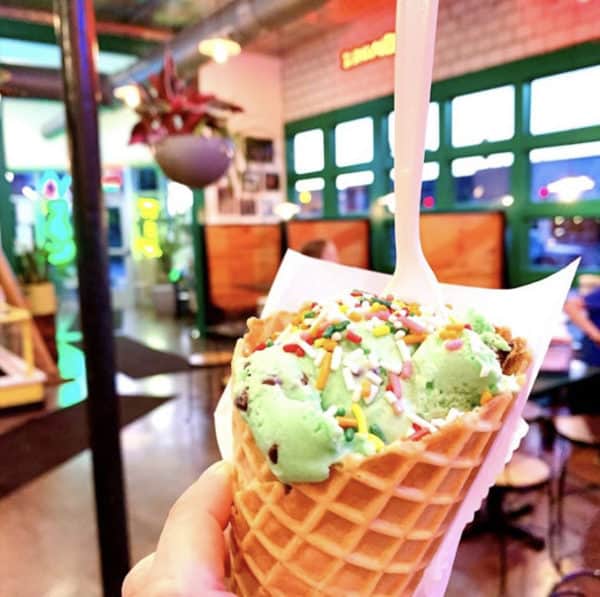 When the weather is hot, there is no other dessert besides ice cream. (Seriously, I asked and I was ridiculed because really, is there anything better?) We have many great ice cream places in Omaha, but few can top the ones on this list. If you have a favorite or a recommendation that isn’t on this list, please leave a comment.

Updated: This post was written in 2018 and updated with a new restaurant. If you know of any other updates, please let me know in a comment!

Here are some of my favorite Omaha ice cream shops (the first five I can vouch for) and some readers tell me are top notch.

Coneflower Creamery is a fairly new ice cream shop in the Blackstone District that uses local ingredients and deserves all the rave review it has received.

Expect a line out the door, but also expect it to be worth the wait (though, my guilty secret is going during Husker football games – no line!). You won’t regret splurging on a waffle cone – they’re made in-house. 3921 Farnam St.

I’m pretty loyal to Ted and Wally’s, which has a location in the Old Market and in Benson. The flavors rotate regularly and some can be pretty radical combinations.

In previous visits, they’ve had the option of ordering an ice cream sandwich made with a fresh donut. I’m a traditionalist and swear by their dutch chocolate – it’s the best in the world. Yes, the world. 1120 Jackson St. and 6023 Maple St.

Perhaps you saw eCreamery on “Shark Tank”? Their Shark Bait ice cream is legendary, and well worth sampling, if not just getting yourself a waffle cone of it.

For those always up for a challenge, eCreamery has the Dundee Challenge – eat 12 scoops of ice cream in 20 minutes. 5001 Underwood Ave.

For old-fashioned root beer floats, you’ve got to go to the soda fountain at The Durham Museum. It’s one of those Omaha experiences you just have to do.

Note that it’s in a museum, so you will have to pay museum admission – might as well explore while you’re there. 801 S. 10th St.

Related post: Everything You Need To Know About Durham Museum Annual Events

For something a little different, there’s rolled ice cream. The way Freezing makes its ice cream sundaes is an impressive process, but in my opinion, the flavor isn’t nearly as good as the first three on the list. 1918 S. 67th St.

Coffee shops aren’t my first choice for ice cream, either. But for a jolt of energy with your ice cream, head to Zen Coffee to get an affogato, which is typically vanilla ice cream (or gelato) and a shot of espresso.

This Elkhorn, Neb., ice cream shop continues to pop up every time I ask the question, “Where’s the best ice cream in Omaha,” so I’m beginning to suspect I need to make a trip out west to test it out. Because Dairy Cheff continues to be recommended, I’m adding it to this list. PS, look up their Facebook page.

This ice cream shop in Council Bluffs, Iowa, has a following, and like Dairy Chef, always comes up when I’m talking about homemade ice cream. In 2019, it was voted The Daily Nonpareil’s Readers Choice. Doozie’s also wins for its location: It’s right by Lake Manawa State Park. 321 Comanche St., Council Bluffs, Iowa

Since I wrote this, I found out about a place in Omaha serving HUGE milkshakes, and I felt that it should be mentioned (though, I can’t vouch for quality or if it’s worth the price since I haven’t been there).

The Hunger Block, 11036 Elm St., is a Latin restaurant but their shakes are getting attention. They’re served in mason jars and topped with ice cream, donuts, sundae cones, cookies and more. Good luck finishing it!

Tip: You can also find monster ice cream shakes at Vala’s Pumpkin Patch. It’s only open for a short time in the fall, though.