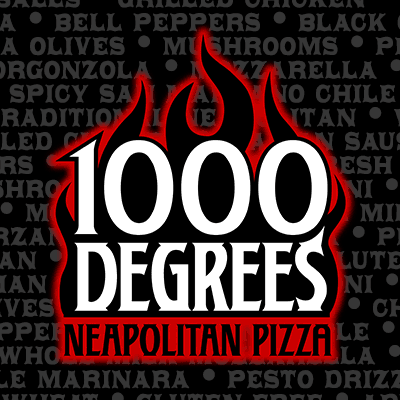 It’s not an easy feat to make good pizza quickly. If you’re looking for pizza in Elkhorn, Neb., you can find fast, good, and personalized pizza now at 1000 Degrees Neapolitan Pizzeria. The franchise opened its second location in the Metro – and it’s true, the pizzeria’s 1000-degree oven bakes pizzas in two minutes. My family was invited to a dinner out at the restaurant so I could tell you all about it.

Disclosure: This post is sponsored by 1000 Degrees Neapolitan Pizzeria. I was compensated for writing about my experience. As always, my opinions, descriptions and typos are my own.

The Food At 1000 Degrees Neapolitan Pizzeria

Let’s just jump into the food, that’s what you’re curious about, right? While the menu does branch out out to include some salads and fire-roasted chicken wings, the main reason to go here is pizza. You can order one of their classics, with toppings and sauces already decided, or you can create your own. The price doesn’t change whether you add two or 12 toppings.

You can tweak the classics, too. I heard the White Out pizza was delicious as is: Extra virgin olive oil, shredded mozzarella, parmesan, fresh mushrooms, and garlic. But, I met Derek Benson-Williams, the franchise’s regional manager, and he mentioned he added bacon to the White Out.

The White Out with bacon was a savory treat, but the standout pizza was the one Mr. Wonderful ordered. He got the Smokey Pollo and made no changes to it. This flavorful pizza has sweet and smokey bourbon barbecue sauce, roasted chicken, bacon, red onion, red peppers, pineapple, shredded mozzarella and blue cheese. I’m not a fan of blue cheese, but on this pizza, it was just right.

My family all went with Neapolitan-style pizzas, but 1000 Degrees also has a style called Roman, with a thicker, puffier crust.

For four of us, we got three 10-inch pizzas, plus cheesy breadsticks. That was more than enough for us. One pizza was enough for my two young kids, but adding the breadsticks insured they didn’t finish the entire pizza.

I loved the individualization of pizzas at 1000 Degrees Neapolitan Pizzeria, particularly since my kids can be rather picky. I’m pretty sure once they begin venturing out beyond pepperoni, they would be happy to add something crazy like macaroni and cheese to their pizza, but for now, they were content with their usual.

We’ve had Neapolitan style pizza before, and the kids have balked at eating pizza with the fresh mozzarella slices on it. Crazy, right? It’s so good when it’s fresh. You can get fresh mozzarella at 1000 Degrees Neapolitan Pizzeria, but if you’ve got kids like mine, you can also opt for the shredded variety to satisfy them.

Ordering at a Fast-Casual Pizzeria

1000 Degrees Neapolitan Pizzeria takes some inspiration from places like Subway, letting people have things the way they want them. That may mean standing at the counter and pointing out the toppings you want, deciding on which of the eight sauces you like, and deciding if you want just want type of cheese on top (or all eight). Then you have to figure out which crust you want (there’s a gluten-free option, too).

Being a newly opened restaurant, this could mean a line forms as people get the hang of things. Bring your patience at meal time until everyone gets the hang of it.

We dined at the Elkhorn location, the newest 1000 Degrees in the Metro area.

There is an Omaha location of 1000 Degrees Neapolitan Pizzeria that’s been open since last May. You can head there for some great deals to save a little money. The biggie is the $6 Thursday deal. Any 10-inch pizza is $6, which is about 30% off the regular price.

The Omaha location also has five meal combos that are nice deals, too. These are the current bundle deals:

Stay In The Know

Never miss a post on things to do in Omaha and beyond! Subscribe to the FREE bi-weekly e-newsletter sharing giveaways, travel inspiration and more! Subscribe here.