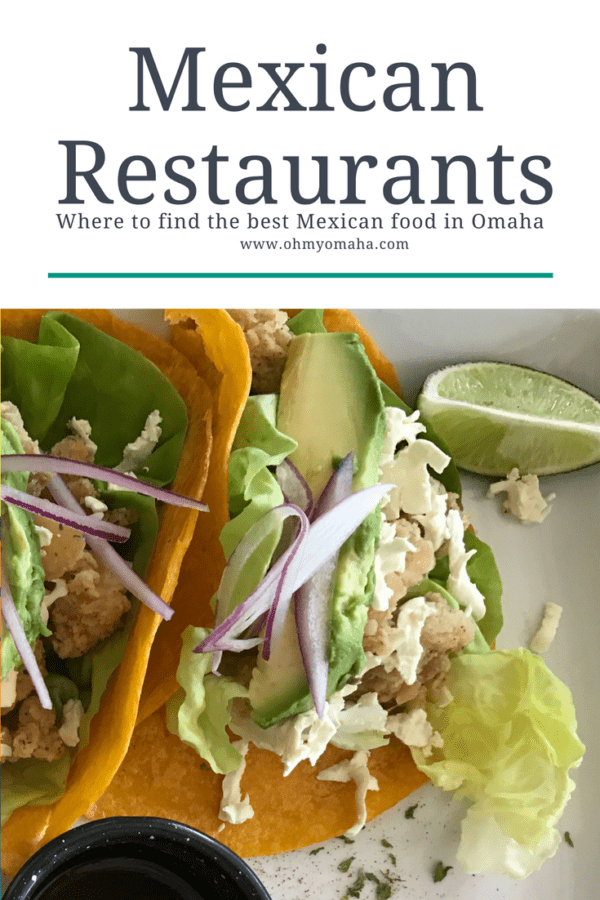 Omaha has a vibrant Mexican community. Head to South 24th Street sometime and feel transported to Mexico, with its shops and restaurants advertising in Spanish,  and the colorful streetscape. just on South 24th Street isn’t the only place to find good Mexican food in Omaha, though.

UPDATES: This post was first published in 2017 and was updated in January 2019 with new restaurants.

Ready to try a new Mexican restaurant? I asked Oh My! Omaha Facebook fans to share their favorites, and they delivered a great assortment of options. Here’s are some of their local Mexican favorites, with a few of mine mixed in:

Located in the food hall, The Inner Rail, it’s easy to overlook ACTQ due to all the competing nearby restaurants. But, don’t skip it. I tried several restaurants at this food hall round-up ACTQ (which stands for Alta Calidad Taqueria) was the run-away winner.

It’s the third taqueria to be opened by Brooklyn chef and restaurant Akhtar Nawab. Be sure to order the roti, which is kinda like a flatbread.

This was a surprising West Omaha cantina that has some killer street tacos. From the outside, I didn’t expect much from The Corner Kick, but it lived up to the hype I’d heard on Faecbook.

Katie L. and Krynn P. both recommended El Dorado. “The paradillas and seafood cocktails are INCREDIBLE. It is SO GOOD!!,” said Katie, who also wanted to point out the strawberry margaritas are “pretty yummy.”

Krynn said El Dorado was a household favorite. Her husband’s favorite thing to order there are the chicken enchiladas.

Tip: If you’re looking for menudo in Omaha, head to El Dorado on Saturday or Sunday.

Donna W. recommended Fernando’s, though with two locations in Omaha, I’m not sure which one she’d steer you to. Her grandaughters’ favorite thing to order are the chicken enchiladas, but Donna’s can’t narrow it down (and no, Donna, the margarita doesn’t count!).

Fernando’s is a Mexican restaurant that specializes in recipes from Jalisco, Mexico.

Laura S. agreed with Brian, “Their burritos and tacos are the  💣.”

Jennifer in the Things To Do In Omaha & Beyond Facebook Group recommended El Vallarta, which is quite possibly the restaurant that’s the furthest west on the list. El Vallarta specializes in food from the Vallarta region in Mexico.

This modern NoDo eatery is Mexican-inspired food and it’s darn good stuff. Being small plate and seafood-centric, Hook and Lime is not a place my kids would like, but if you’re looking for a fun place to go to with friends, Hook and Lime is a good pick.

Hook and Lime got the nod from Jenna G. and Beth K. in the Facebook Group Things To Do In Omaha & Beyond.

Yes, I agree with Lori S.  and LeAnna B. on this one, while Jacobo’s is a small grocery store and not a restaurant, its food counter should be included on this list. “The burritos at Jacobos are TDF! And the salsa! and the tamales…,” wrote Lori.

We made a special trip to Jacobo’s just to buy salsa. It’s that good. Said Leanna “Jacobos is a MUST for take out salsa!!”

This little restaurant was recommended by Jenna G. and Amanda R., who said “The best tacos I’ve ever had, honestly. Go for Taco Tuesday!” Jenna warns that if you’re a vegetarian, it’s a little “meaty.”

There aren’t many restaurants that have slipped under my radar but La Casita is one of them. I’ve added it to my “to try” list!

Tip: This is not to be confused with the Maria Bonita Food Truck, which is also a good Mexican eatery.

According to Wendy S., everything at Maximo’s is good, plus a “rocking happy hour and amazing staff.”

Dana Z. from Mom’s Good Eats recommends Mula in the trendy Blackstone neighborhood, especially the guacamole and the strawberry margarita.

Tip: Mula’s has an excellent Happy Hour, including Taco Tuesday where it’s buy one taco, get one taco half-off.

“Rivera’s is the best! Hands down!,” said reader Amy B. “Their menu is amazing and the staff is great too!”

I asked her what she’d recommend at Rivera’s – which features cuisine from Puebla, Mexico – and she suggested pastor tacos, and for more a unique variety, try the enchiladas potosinas, pollo a las brasas, or the carne asada. “You won’t be disappointed.”

Rivera’s recently underwent some renovations, and has returned with mixed reviews, but at least one of my readers, Sara B., still recommends it.

Tip: Rivera’s has more than 100 tequilas.

Tim T. with The Walking Tourists recommended Trini’s, a charming restaurant in the Old Market that I like too, mostly because of the atmosphere and location. This was also recommended by Alisha more recently in the Facebook Group, Things To Do In Omaha & Beyond.

Your turn: Where in Omaha can you find the best Mexican food?

1 thought on “Where To Find Good Mexican Food In Omaha”