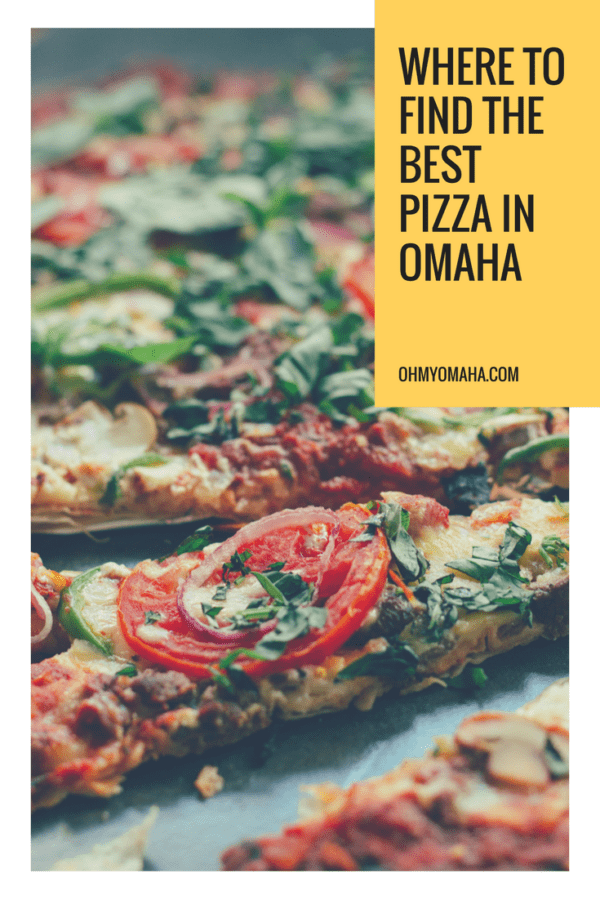 We may be known for our steaks, but Omaha has some serious pizza goodness going on. But who serves up the best pizza in Omaha? I rounded up some locals to share their favorite places to grab a slice to help you decide.

This post was first published in 2016, and was updated in December 2019 with new information.

I’ll start things off. My all-time favorite is La Casa Pizzaria’s thin-crust margherita. I’m not even kidding, back in the day, after a long bike ride, I’ve nearly polished off a whole pizza myself. It’s that good.

The crust is ah-mazing too. The corner slices are the best because of the extra crust. If you balk at thin crust, you’ve never had La Casa thin crust.

A long-time player in Omaha’s food scene (since 1919), Orsi Italian Bakery & Pizzeria gets a nod from Christi from Leupold Confidential. She recommends Orsi’s for what she calls traditional, old fashioned goodness.

Johnny Sortino’s has been serving up pizza since 1965. Bolton Carley says it’s the Saturday night pick-up she and her husband go out of their way to get.

What’s so good about it? Bolton says they use different cheeses that just makes it better and the sauce has just the right flavor and isn’t chunky. As a bonus, it reheats well. She recommends the Hawaiian, but her husband goes for all-meat combos.

For more than 25 years, Mama’s Pizza has been dishing some really good pizza. They have three locations in Omaha, so there’s a good chance you’ve dined there if your child has ever played a team sport.

Two bloggers gave Mama’s some love, Laura from Qpon Saving Mommas and Heidi from Maternal Media. Heidi loved it because when the kids reach a certain age, you can dump them in the arcade/game area and have grown-up conversations at the table. Her family’s favorites are pepperoni or hamburger. “Pair up the pie with a cherry fountain Coke and you’ll be bound to want to unbutton your pants in no time. Sit back and relax!”

There’s something about the taste of pizza that comes out of a wood fire oven. It’s divine. One of the newest kids on the block, Via Farina offers hand-crafted pizza from a wood oven. It was recommended by two people – Christi from Leupold Confidential (she calls it a “foodie’s dream) and Dana from Mom’s Good Eats.

Dana loves the Uovoi with kale, pancetta, egg, Pecorino Romano, thyme and tomato. While there, she said you should be sure to try the house-made pasta. Dana also included Via Farina in her roundup of great food and drinks in Omaha on Tri Wives Club.

Another local pizza place that got a recommendation from an Omaha blogger is Noli’s Pizzeria in the Blackstone District. Julie at the Hostess at Heart suggested it. You’ll find some creative toppings there.

Tip: Noli’s opened a second location in the fall of 2019. Find the new Noli’s inside the Inner Rail Food Hall at Aksarben Village.

Jamie from The Kitchenarium had a few great suggestions for different reasons: “For big groups or family gatherings, we like to pick up The Big Joe from Frank’s Pizzeria. We usually get the Meat Lover’s and for $60 we have fed 20+ people and had leftovers! It is delicious and a great economic choice. 🙂 I think Pizzeria Davlo has the best gluten-free crust in town – Der Bamberg is what we order. Have to love sauerkraut on pizza!”

Here casual family movie night pick is one of my guilty pleasures, too: Casey’s pizza. Yes, a gas station pizza. Jamie speculates that the appeal is their cheese blend. Which should you try? She recommended the taco and traditional pepperoni, as well as the breakfast pizza.

Julie from Family Fun in Omaha suggested Varsity/Roman Coin Pizza, which also is a favorite of my family’s. Whatever you order, get the cheesy breadsticks. There are four locations so you should be able to find one near your neighborhood.

Kathleen from Thinking Smaller is a huge fan of the West Omaha eatery, Dante Ristorante Pizzeria. She orders the Diavolo & Monterosso pizzas almost every visit. You can’t beat their Neapolitan pizzas made with ingredients from local farms and cooked in a wood-fired oven.

Going with a traditional Nebraska favorite, Lisa from The Walking Tourists suggested Valentino’s cheeseburger pizza (it’s cut into squares). It’s also one of the few local places that has a heart-shapped pizza on Valentine’s Day. There are seven locations in Omaha and Bellevue.

Gretchen from Odyssey Through Nebraska isn’t quite local, but she’s visited enough to recommend some good ones! She recommends Zio’s Pizzeria and Raggazi’s Pizza.

She’s even written about them (here’s her Zio’s post and Raggazi’s post). If she had to choose, she says she’s a Zio’s girl.

Amanda P. pointed out that Mangia Italiana was missing from the list (it’s a good one – try it!), and Kristina L. suggested Lighthouse Pizza.

Virtuoso Pizzeria was a resounding request to have added to the list.

Your turn! Who serves the best pizza in Omaha? Leave a comment to let me know.

In 2018, pizza got pretty competitive in Omaha with The Great Pizza Tournament. Things kicked off on the Oh My! Omaha Facebook page, with Twitter tweeps weighing in, also. See the brackets below.

After many weeks of competition, the winner was… Mangia Italiana.

Here’s how the brackets played out:

I highly recommend checking out the pizzerias in the tournament that you’ve never been to. You may find a new favorite!

11 thoughts on “Where To Find The Best Pizza In Omaha”