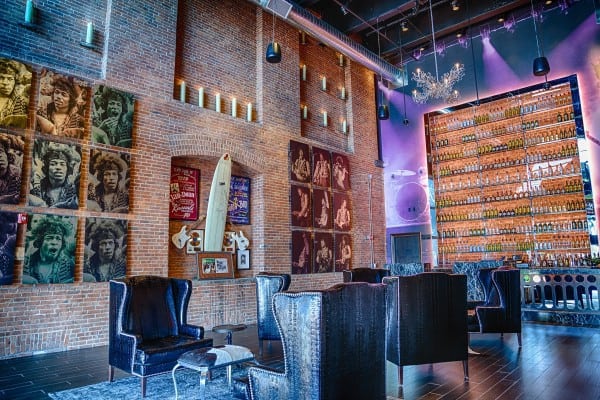 Located a stone’s throw from Interstate 29, the hotel is a themed experience that allows guests to live the rock star life for a night.

Disclosure: Our stay was hosted by Sioux City Tourism. All thoughts, opinions and typos are my own. 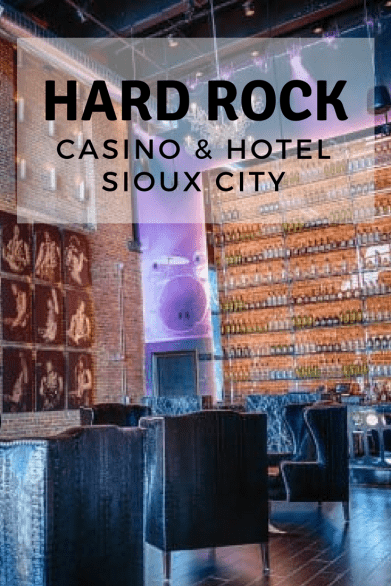 I recently stayed a night courtesy of the hotel. Mr. Wonderful and I needed a night off and so we found a sitter for the kids and drove off to Sioux City. It was a blast and being short (enough) distance from Omaha, it was a perfect overnight getaway. Read about 24 kid-free hours in Sioux City here.

Right when you walk in, you see it’s not like most hotels.

Jimi Hendrix stares down at you from the wall. The front desk is a bar. And as part of check in, you have the option of getting a complimentary drink to take with you up to your room (beer or house cocktail).

Why thank you, Mr. Bartender.

Everywhere you walk in the hotel, you see music memorabilia and lyrics. The theme carries over into the rooms.

I’m a sucker for a hotel like this. It makes your stay memorable.

Music fans will love all the memorabilia throughout the hotel. The main floor is especially cool with all the apparel, signed guitars and plaques explaining the significance.

The décor in restaurants, from the buffet the trendy gastropub, Main + Abbey, carry the music theme throughout.

The newness of rock is contrasted by the history of the building itself. The hotel portion of the Hard Rock Hotel & Casino Sioux City is located in the Battery Building, which is on the National Historic Register of Historic Places. It dates back to 1905.

The combination of exposed brick and concert posters actually works really well. It’s such a great look, especially in the rooms.

Our hotel room had vaulted ceilings that made the standard room feel much more spacious.

The bathrooms were sleek and modern, with walk-in showers. I felt spoiled staying there.

There are three restaurants at the Hard Rock, plus room service. We tried Main + Abbey, which is definitely the Date Night place to be in Sioux City. Reservations would be smart.

Rather than order entrees, we split several appetizers and order drinks. If you do the same, I recommend asking them to be brought as they’re prepared rather than all at once. It cuts down on some coming out lukewarm. We had a couple that were cold, and our waiter was super quick to replace the dishes with hot ones.

We tried poutine, shrimp pierogies, street chicken tacos and split the onion soup and shrimp bisque. Wondering what to order? The pierogies were so good, the the poitine while heavy, was very flavorful. Those are superb, but next time, I think we’ll go with entrees and just one appetizer.

Your meal will include free beer bread and ends with square of chocolate sea salt caramels. Delicious!

The Hard Rock Hotel & Casino has a big buffet, and whenever I walked by it, there was a line to get in, so they must be doing something right.

There is also a grill within the casino called Fuel, where you can load up on burgers and the like.

Room service looks to combine the offerings from Fuel and Main + Abbey, with clever names thrown in to keep the music theme going.

This is a hotel and casino combo, so a lot of people are there to gamble. That’s not my scene, so I ventured in only briefly. It’s a very popular spot that Saturday night.

Anthem is a large venue that looks deceptively small from the outside. During our visit, we saw Jon Lovitz (thank you, Hard Rock, for the complimentary tickets!). There is a nightly show there from music to stand up.

You never know who you might meet at the Hard Rock. Lovitz stopped into the karaoke party the night before his show.

There are tons of shows on the calendar, but one annual event to keep on your radar is Saturday in the Park. Held in July, this is a free, all-day event presented by Hard Rock Hotel & Casino features huge acts. The 2018 Saturday in the Park is July 7 with Jason Isbell and the 400 Unit headlining. Get more details here.

What else you should know 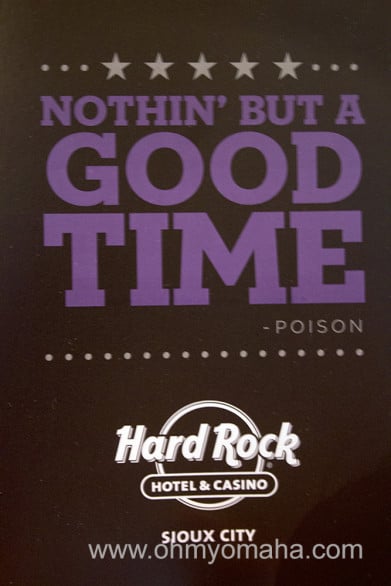 This is decidedly an adult playground, from the drinks at check in to the casino.

The pool is outdoors and seasonal, so only pack your suit if you’re staying between Memorial Day and Labor Day.

There is gift shop where you can get your Hard Rock gear. And if you’re the guilt-ridden kind of parent, you can get a cute teddy bear or something for the kids you left at home.

The hotel is within walking distance to some bars and restaurants, as well as some of the city’s other great attractions: Sioux City Art Museum, The Public Museum, and a cool trail along the Missouri River. There’s also a movie theater and the Orpheum Theater nearby. Again, it’s all walkable (unless the weather stinks). It’s also near Jackson Street Brewing if you’re into trying local beer.

Cost: Rates vary depending on the season and day of the week you stay. It’s high-end so expect high-end prices. Comparing different dates, you can save almost $100 staying during the week than on the weekend.

Inside the Sioux City Public Museum