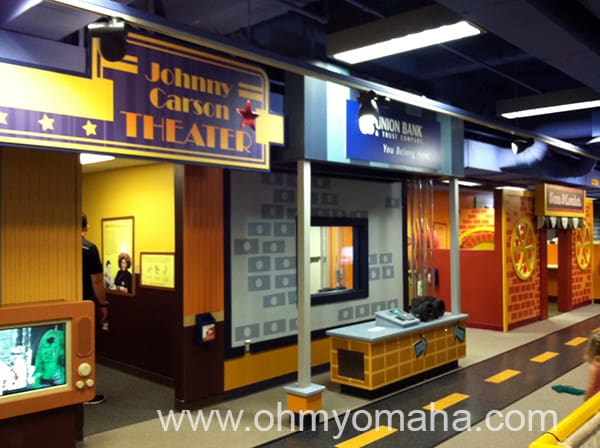 This post was first published in 2014. It has been updated in August 2019 to reflect current prices for admission.

Lincoln’s Children’s Museum is located a few blocks from the University of Nebraska-Lincoln in the downtown area. Parking is tricky, especially if you time it like us, and go on a Husker game day. There is no parking lot for the museum, it’s all street parking.

The three-story museum is a lot to take in for the first-timer. My kids had no idea which way to go, but they spotted a hot air balloon and water feature on the bottom level first, so off we went.

The bottom level had a lot we hadn’t seen at our hometown children’s museum.

The water area was really large, and was my son’s favorite in the whole museum.

Kids could build dams, play with water toys, and for the youngest, there were little seats that gave them access to splash with their hands.

The rest of the lower level was an assortment for different interests – a tunnel system to pretend to be prairie dogs; a stage and dress up area; the fun photo opp, the big red rocking chair; and several other play areas.

The middle floor featured areas that represented Nebraska life well. Here are a few things you’ll find in Tiny Town. Since we last visited, there have been some major updates – including a mini Runza restaurant and a mini ninja obstacle course!

– Kimmel Family Apple Orchard (with a game both my kids enjoyed).

It also had an area for children to pretend to be in the police and fire departments, as well as a cute separated area for younger visitors.

The top floor had some exciting stuff for my kids – a full-size plane, plus a mini space station.

It was also the location of the small art center and face painting stations, the top of the tree house (the tree runs through all three levels) and some other transportation-related stuff.

In subsequent visits, the Cuckoo Construction area has bypassed the other exhibits listed below. It’s really a fun exhibit that builds teamwork!

When my son was in preschool he loved the water room the most. The sound of the running water was relaxing, and there was a lot of space to play.

My 2-year-old seemed to return the stage again and again. Between the costumes and being able to see herself on TV, I know she loved it.

I liked how there was a sound booth kids could play with and they can change the scenery themselves.

Tip: Reciprocal membership alert! If you have a Patron membership to Omaha Children’s Museum, you receive 50% off admission for up to 6 people.

There’s more to see and do in Lincoln, especially if you have young kids! Here are a few posts about Lincoln attractions to inspire your next trip:

24 Hours Of Fun In Lincoln With Kids

Things To Do Near Lincoln Children’s Museum

Fun Things To Do At Lincoln Children’s Zoo

Things to Do Near Lincoln’s Zoo (Sunken Gardens, Antelope Park)

What’s Kid-Friendly in The Lincoln Haymarket?