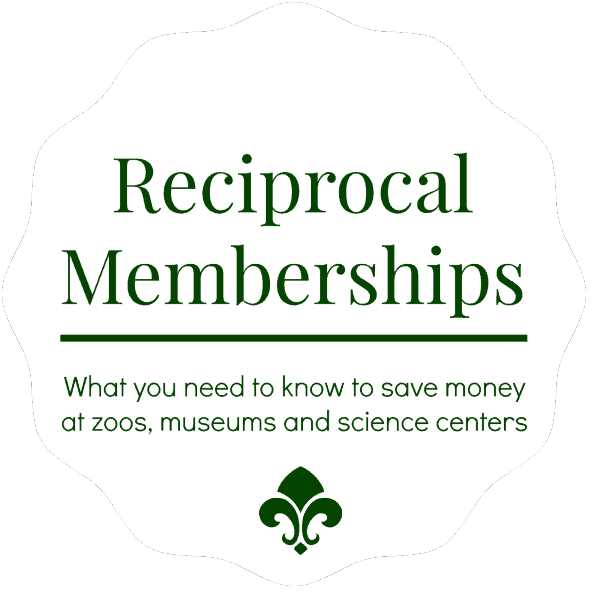 While planning a family vacation recently, I started to worry about the cost of admission to places adding up. Then I remembered reciprocal membership benefits for museums and zoos. I’d read about it elsewhere (Odyssey Through Nebraska and So Cal With Kids) but I hadn’t really took note until now.

We’re members to the Omaha Children’s Museum and Omaha’s Henry Doorly Zoo & Aquarium, but I hadn’t ever considered if those memberships got us benefits elsewhere.

They do. And sometimes, those memberships can get us into places for FREE.

It’s a pretty sweet deal when planning trips with kids.

All these reciprocal programs listed below recommend you call ahead, since perks depend on the location and, simply, change.

Find members of the Association of Zoos & Aquariums here.  Members of the Omaha zoo get 50% off admission to many zoos around the country.

Other participating zoos in Nebraska and Iowa

*Please note that these lists of participants may change from year to year so double check before traveling to one.

Members get discounted admission to more than 250 science and technology centers across the country thanks to the Association of Science and Technology Centers (some unfortunate exclusions include any science centers and museums located within 90 miles of the science center or museum where you are a member or withing your residence).

Other participating Museums in Nebraska and Iowa

It’s always good to call ahead to see if your membership will get you a discount. Participants on the list may change from year to year. Exclusions apply, so if your home museum or your residence is within 90 miles, you may be excluded.

Patron members at Omaha Children’s Museum also receive discounts to participating museums that belong to the Association of Children’s Museums. The discount is typically 50% off admission for up to six people.

I know what you’re thinking – admission is FREE there already, why get a membership? There are definitely perks to a membership (beyond the satisfaction of support a great institution). One perk is getting you FREE admission to 687 other museums if you get the Contributing Membership or Patron Membership, as well as discounts to those museums’ gift shops and concert/event tickets. See the full list at North American Reciprocal Museums’ website.

Where does your Joslyn membership get you benefits in Nebraska and Iowa?

It’s always good to call ahead to see if your membership will get you a discount. Participants on the list may change from year to year.

Museum of Nebraska Art in Kearney

Sheldon Museum of Art in Lincoln

Arts on Grand in Spencer, Iowa

Waterloo Center for the Arts in Waterloo, Iowa

Gretchen over at Odyssey in Nebraska had a good tip for these memberships: “Kids actually get in free to all locations, so I bought an individual membership since I knew that I would be the main one going to visit historic locations.”

Here’s where you can get in FREE with this membership:

It’s always good to call ahead to see if your membership will get you a discount. Participants on the list may change from year to year.

Check the member list of the American Alliance Museums (it changes annually) before you visit a new place – it might offer reciprocal membership benefits. For instance, I found out – after the fact – that our Omaha Children’s Museum membership gets us in for FREE to University of Nebraska State Museum of Natural History (Morrill Hall) in Lincoln.

If you’re a supporter to Nebraska Statewide Arboretum in the University of Nebraska-Lincoln, you get discounts to about 300 gardens around the country that belong to the American Horticultural Society.

Two on the list that we’ve visited and I highly recommend visiting is Botanica, The Wichita Gardens in Kansas and Missouri Botanical Gardens in St. Louis.