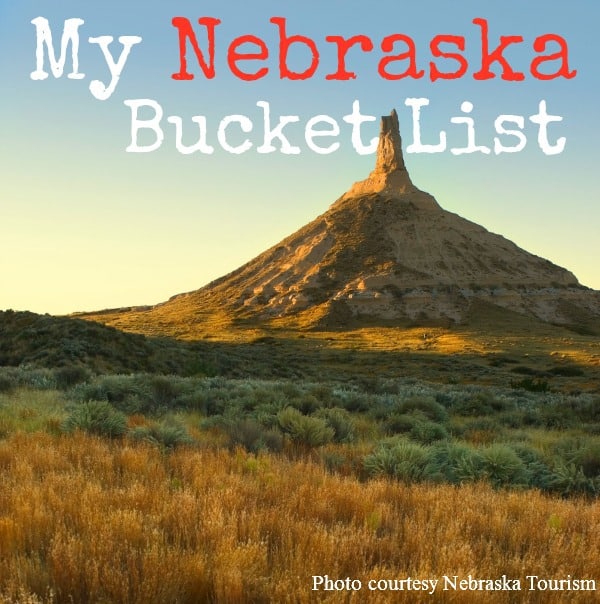 Good ol’ Nebraska. It’s my home state, I’m pretty protective of it. Fly over it if you must, but you’re missing out. There’s a lot to do Nebraska. I’ve gathered all the things I still need to explore in the state to create this ultimate Nebraska Bucket List.

UPDATED: This post was first published in 2014 and has been updated in November 2019. To help keep this post current, please let me know if anything needs additional updates! This post may contain affiliate links.

2. Go Western. I’d like to do the whole Fort Robinson experience thing.

UPDATE: We visited! Here’s my review of the state park including one thing I didn’t know about: Off-road jeep tours!

3. Stay at a ranch, maybe do some ranch things. I’m not sure what that would be – probably ride a horse and herd cattle. I should watch “City Slickers” again to refresh my memory.

Here are a few guest ranches that I could see myself channeling my inner cowgirl: Ponderosa Ranch and Rowse’s 1 Plus 1 Ranch. And by channel, I mean, I do about 10 minutes of hard work and then relax the rest of my stay.

4. See a Native American pow wow. Long ago, I was an exchange student in Spain and my host family thought it was all pow wows in Nebraska. Not so much. But, I feel like I owe it to my host sister and her obsession with Native Americans and go to one of these finally.

Fort Robinson is known for a big one, the Intertribal Gathering and Pow Wow, in June. There’s one in north Omaha held each September, the Fort Omaha Intertribal Powow, on the same grounds here Ponca Chief Standing Bear was once imprisoned.

5. Walk along strange land. Ever since I saw a picture of Toadstool Geologic Park (the Oglala National Grassland), I’ve been fascinated by the strange rock formations.

People say they look like toadstool mushrooms or the lunar surface.

UPDATE: We did it! You can see a picture of our visit in this Western Nebraska/South Dakota road trip recap post.

This one’s pretty self-explanatory. Ashfalls is a working dig site in Nebraska.

7. See Nebraska’s archaeological hidden gem. Toadstool isn’t too far from the Hudson-Meng Research and Education Center where there’s an excavation of a 10,000-year-old bison bone bed going on.

I’ve seen that river countless time from a car and the lookout tower at Mahoney State Park, so I want to see it from a different view now.

9. See the Nebraska State Fair in Grand Island. I haven’t been to the state fair since I was child – back when it was in Lincoln. I don’t even remember it. It’s probably time I go back.

And I suppose I ought to bring the kids.

10. See the Scottsbluffs National Monument. This part of Nebraska is iconic, but not exactly easy to get to from Omaha, so I’ve never made the trip.

The Nebraska Tourism Commision released a list of 10 of the state’s top attractions and events and this was one of two I haven’t been to (see #1 on this list for the other). So I must go there. I’m a completist.

11. Celebrate Cinco de Mayo, Omaha style. South Omaha has a large celebration every year, and every year I think I ought to check it out (former exchange student sense of duty).

12. Enjoy a dinner paired with the right wine at the Boiler Room in Omaha’s Old Market. While this isn’t the new darling on the Omaha dining scene anymore, it’s one of those restaurants that I’ve been meaning to check out and never do. I’ve heard the wine list is divine.

13. See one of the College World Series championship games in its new home, TD Ameritrade Park. I’ve been to many CWS games at Rosenblatt Stadium, never one of the championship ones, though.

For more ideas on where to go in Nebraska, consider a quirky book like Nebraska Off the Beaten Path®: A Guide To Unique Places or Nebraska Curiosities: Quirkly Characters, Roadside Oddities & Other Offbeat Stuff .

More things to do in Nebraska

So now you know the bucket list of things I want to do and see in my home state, Nebraska. I’ve already seen and done a lot in the state, so here are some of my top picks for you to consider for your own Nebraska Bucket List:

10 Unique Places To Stay In Nebraska

10 Unforgettable Things To Do In Nebraska This Summer