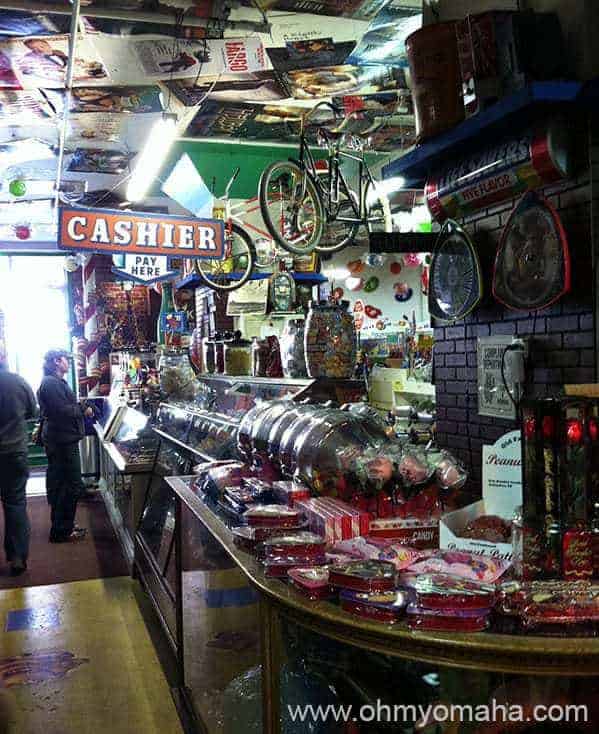 If there’s one store I tell families to visit in Omaha’s Old Market, it’s Hollywood Candy. Easily one of the quirkiest stores in the entire city, the large shop is part-candy store, part-collectors’ dream shop, and part old-school pinball arcade.

Update: This post was published in 2014 and has been updated in November 2019.

Where is Hollywood Candy?

Hollywood Candy is on the southern edge of the Old Market, Omaha’s charming neighborhood of shops and restaurants in the downtown area. They opened in 2007.

The store is housed in a large, red brick building called the Fairmont Mercantile. Before rushing into the store, be sure you check out the fun decorations in front of it, especially along 12th Street.

What can you buy at Hollywood Candy?

The better question is what can’t you buy at Hollywood Candy. You’ll find a rainbow of candies, from oddities to nostalgic treats to everything in between. Even Nebraska’s own Bakers Candies are there.

And while we all call it “Hollywood Candy,” the store consists of more than just the candy shop. A lot more.

Fremont Antiques & Mercantile is also part of Hollywood Candy. It’s a collection of various vendors selling all sorts of memorabilia from records and vintage signs to troll dolls.

There is also the Hollywood Pinball & Arcade Museum. I usually just refer to it as the vintage pinball area. You can play the machines (that are working) for a quarter.

There’s also all sorts of random memorabilia to find (like a piano once played by Lady Gaga) and mystery items to intrigue kids (like a rotating door that goes to…?).

If you’re hungry, there’s an old-fashioned soda fountain inside called the Fairmont Diner.

Wander around long enough and you’ll find the movie theater inside the store. They play free movies from time to time there.

Is parking free at Hollywood Candy?

Like most places in the Old Market, there is only metered parking in front of Hollywood Candy. Meters in Omaha run until 9 p.m., so be sure to plug it before you go in to shop.

You don’ have to pay the meters on Sundays, holidays or after 9 p.m.

It’s funny that I took so long to bring my kids to Hollywood Candy. I have my reasons. Mainly: Sugar and my kids don’t get along.

But, for a special day out, we brought them to explore Hollywood Candy. They got a contact sugar high just on entry.

The old movie theater was too dark for them want to go in. But I thought it looked neat.

What else can you do by Hollywood Candy?

I wouldn’t tell you all to make a special trip to the Old Market just to poke around this one store – even though it’s a pretty neat one to browse.

While you’re downtown, pair your visit to Hollywood Candy with some other activity. It’s not far from Omaha Children’s Museum or Omaha’s zoo. There are also 10+ free things to do in the Old Market with kids.

Looking for a restaurant near Hollywood Candy? My favorite ice cream shop is just across the street – Ted and Wally’s. For more ideas, check out this post on great family-friendly restaurants in downtown Omaha.

9 thoughts on “The Quirkiest Store In The Old Market: Hollywood Candy”