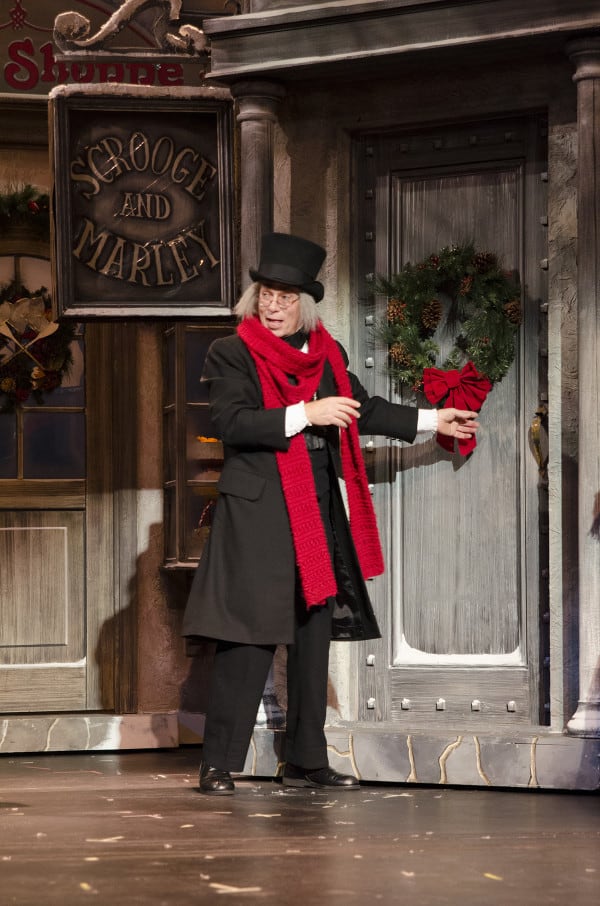 One thing few outside of the Omaha theater world may realize is that we are blessed with a vibrant performing arts community here. Check out Theatre Arts Guild and see how many companies we have out there. Go ahead, I’ll wait for you.

Lucky for us, many of those creative types love Christmas. Well, that’s my assumption since each year we get a great variety of holiday plays and musicals to choose from.

Here’s a rundown of some of the 2013 holiday theater productions in Omaha (both kid-friendly and adults only):

There will be riots if the nation’s largest community theater ever decides to stop its annual tradition, “The Christmas Carol.” Riots, I tell ya. Going on it’s 114th year of its run – my rough estimate – this is the granddaddy of Christmas productions. It always has exquisite scenery and costumes, the cream of the crop in area talent and flawless production. You’ll want to start bringing the kids to this when they’re in grade school – the ghost of Christmas Future might spook the littles, plus it’s a little long for short attention spans. This year, it runs Nov. 22 through Dec. 23. (FYI, tickets prices go up later in the run)

Another sure bet for holiday fare is The Rose, and a guaranteed kid-friendly production even for the younger set. Last year, they presented “Madeline’s Christmas” and my son – who was a tad over 3 when we went with two of his cousins – still talks about it. This year, they present “Narnia” Dec. 6-29. Not a flat-out Christmas production, but I think some of the messages tie nicely with the season. While the productions they tend to put on December aren’t as elaborate as their summer show-stopper, they’re usually one of my favorites of The Rose’s season each year.

This theater is also almost a sure bet for a holiday show, but like most of its productions, what they put on will not be your mainstream fare. That’s why I like the place so much (besides the fact that my sister-in-law works there – hi, Amy!). Usually, they put on the kind of show for those sick of the happy jolly sugary goodness that usually is found in music and theater this time of year. You know, stuff for the discerning Scrooge. Last year’s production involved solving Santa’s murder. So yeah. This year, they’re putting on “Jacob Marley’s Christmas Carol,” a show I enjoyed immensely when they staged it a few years ago. This is for grown-ups only. Expect incredibly talented actors, a storyline that will entertain you and zero dancing Santas. The show runs Nov. 29 through Dec. 22, and being such a small venue, get your weekend tickets ahead of time because it will likely sell out.

Now for a few other holiday productions and where to find them:

Omaha Performing Arts and Broadway Across America present “Elf the Musical” Nov. 19-24 at the Orpheum (disclosure: I work for OPA). Since this opens tomorrow, I can’t vouch for it just yet, but since I love the movie, I’m willing to expect the best. If you’re wondering whether or not it’s kid-friendly, I’d say it depends on the kids and your tastes. I’ve heard the New York production might have a swear word in it (b****, if you were wondering); but I don’t know if the tour has it. That’s not a huge concern for me, so I’d still take consider taking my almost 4-year-old to a matinee. My concern is that as a Broadway production, it is loooong for a kid. He’d probably it through it fine, but not every pre-k kid is that way. Older kids, yeah, definitely take them. They’d love it. Heck, leave them home and make it a date night.

I stumbled across this theater listing this year: “Gift of the Magi” presented Dec. 2 at 7 p.m. at Music Hall in Boys Town. I can’t find much information on the production, whether or not it’s annual or a one-time thing. However, I loved the O. Henry short story, so how neat would it be to see it staged? This story about love and sacrifice is performed by Boys Town youth, and following the short performance, everyone will walk over to the Christmas Tree Lighting together. See more here.

Ibsen has been putting on a merry Christmas production for 23 years. “The Madrigal Christmasse Feaste” is presented Dec. 3-6 at Regency Marriott Ballroom, 10220 Regency Circle. Reading the description, I’m thinking it’s like Medeival Times meets “Tony and Tina’s Wedding,” where you’ll dine on a multi-course meal in a setting of an old English castle while everyone from your waiter to the musical performers is involved in the show. Since I tend to like the blue-haired type thing, this actually sounds entertaining to me, but I’m certain Mr. Wonderful will suggest I go with my mom (not that my mom is a blue-hair …. I love you, Mama Sue, ignore that last comment). Details here.

Here’s an untraditional theater option: Red Theater Omaha’s “Feliz NaviRed,” which is presented Dec. 20 at 7 p.m. at Bancroft Street Market, 10th and Bancroft streets. At this show, the audience determines the order in which 30 Christmas-themed “playlets” are performed. 60 minutes, 30 playlets, game on. Admission is $8 at the door.

Your turn: What holiday show do you look forward to each year? If you don’t have one, are you thinking of seeing one that’s listed here?

We have a winner in the “Elf the Musical” ticket giveaway! Elisha G., congratulations! Check your email for details on your tickets.