Posted on Published: May 4, 2021 Categories Nebraska 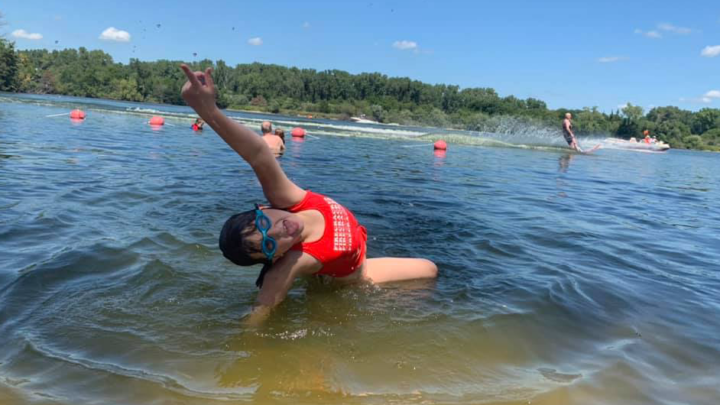 Is there no better place on a hot summer day than having your feet in the sand of a beach? Sure, Omaha isn’t anywhere near an ocean. But lake beaches? There are some lake beaches nearby. I broke up this list into two groups: Nebraska beaches and Iowa beaches. You’ll find there are some Iowa beaches that are actually closer to Omaha than some Nebraska ones!

Some beaches are an easy day trip for Omaha families; some are going to be, at least, an overnight trip in order to fully enjoy them.

Louisville SRA has definitely grown into being a summer destination for Omaha families, thanks to the inflatable obstacle course that resides there. The course itself is an additional fee and there is a time limit. Next to the inflatable course, though, is a nice sandy beach.

The last time I was there, it was pretty busy with plenty of kids in the water and families dotting the shore. You’ll want to bring your own seating.

When you think of sand pit lakes, maybe you picture a lake at Two Rivers SRA. The man-made lakes, only one of which has a swimming beach, are nothing special but they get the job done if you have kids who want to swim in a lake to cool off.

Frankly, the water is a tad too murky for me. But to be fair, more people go to Two Rivers for the fishing, not the beach.

The sand is sticky and ideal for kids who like to dig with sand toys.

You’ll want to bring your own seating.

Fremont Lakes is a fun day trip for my family, especially since it’s not a camping to make it a good overnight trip. But for a day, you can’t beat it. Consisting of several lakes, there’s not just one single beach to choose from.

Pack a picnic, bring some chairs and get comfy. There are plenty of spots with picnic tables near the waterfront.

There is a lakeside restaurant and bar if you don’t fill like grilling or unpacking that picnic.

I’ll always remember Branched Oak Lake, because I just didn’t expect to sit on the gravely shore of a Nebraska lake and have mini waves to marvel at. But there they were.

Granted, the waves were caused by passing boaters, but let’s forget about that.

The sand at this shore is not the most comfortable to sit on, so definitely pack a chair and a blanket to rest your feet on.

I’m most familiar with Fort Kearny being a historic outpost of the United States Army (thus the fort), but it’s also home to seven sand-pit lakes. Swimming and boating are popular here, making it one of the top outdoor places in Kearney.

Side note: These lakes are also popular with migrating Sandhill cranes in the spring.

Where: Near Burwell, Neb.

If you wanted a Sandhills getaway and a beach, head to the Calamus Reservoir. I’ve camped there in the fall, but apparently the best time for sandy beaches is June and July (water levels change there, so you’ll find more sand toward the end of June).

The reservoir is huge, with lake measuring more than 5,100 acres! A portion of the Calamus River is also nearby.

This large reserve in Cherry County is considered one of the best fishing lakes in Nebraska. Like Calamus, it’s located in the Sandhills of Nebraska. The swimming is limited there, but word is, it’s not too crowded.

Besides sandy beaches, Merritt has a couple other things going for it:

Where: Near Ogallala, Neb.

A popular summer destination in Nebraska, Lake McConaughy (or Lake Mac for short) is the largest reservoir in the state, measuring 30,000 surface acres. It’s popular for boaters and windsurfers, and has plenty of sandy beach.

Tip: If you’re not tent camping or staying in an RV, you’ll want to book a cabin, hotel, or rental homes in Ogallala far in advance. Start browsing places like Booking.com early.

Enders Reservoir SRA is one of those hidden gems in Nebraska. It isn’t overly developed because a portion of the reservoir is a wildlife refuge in the fall and winter. Boating is permitted.

I often forget there’s a large state park just across the Missouri River from Omaha. Lake Manawa is more for boating than swimming, but there is a small, sandy beach there for it. I’ve participated in a triathlon that started at the beach.

You’ll need to pay to access said beach (and non-Iowa residents are supposed to pay an additional $5 park fee, as well).

You’ll want to bring chairs and an umbrella, as it’s not the most shaded place. There is a small shop to rent watercraft like kayaks.

I visited Lake Icaria a little too early to get the full summer feel for the place. From what I heard, the lake comes to life with boaters and families. It was a tad too cool for that sort of thing in May.

The beach isn’t too large, but just fine for the park its size in rural Iowa. When we were there, a food truck set up shop by the beach on the weekends. The beach had a covered eating area, so it seemed like a smart call on the food truck’s side.

As luck would have it, we stumbled upon this sandy beach at Viking Lake State Park on a cool, fall afternoon. It wasn’t exactly beach weather and, well, the pandemic was in full swing, so not too surprisingly, the beach wasn’t busy.

The lake itself is a pretty decent drive from Omaha, so I’d say you’ve got a few others to visit first before venturing further into Iowa for Viking Lake.

Clear Lake has three separate beach areas, with the most accessible being located near the Main Street of downtown Clear Lake.

This is another fun lake for boating. When we visited, we were able to hire someone to give us a private tour in his speedboat.

Okoboji consists of several lakes, and is a major summer playground for Iowa and Nebraska families. There’s a lot to do in that area, beyond playing in the water. But this is about lakes, right? I included a list of all of the public beaches in the Okoboji area in this guide to Okoboji.

Q. What should I bring to a lake?

A. Be sure to bring sunscreen, plenty of bottled water, and towels. I recommend packing all food you may need, snacks and/or picnic meals, because there won’t be an abundance of dining options nearby without a drive. Put it all in a cooler – I prefer the ones that are easy to cart around.

Nebraska lakes are sandy, but I’d recommend water shoes regardless (especially look for water shoes for your kids). The small beaches may have debris that you’ll want to avoid stepping on.

If you’re going with kids, bring a variety of sand toys. I’d recommend having a mesh bag to carry the toys in since they will, inevitably, track sand into your home otherwise.

Most lakes are located in parks that may have a small marina with a convenience store or are located near a town with one, so if you forget something, you can likely purchase it there (at a higher cost). A few places that I’ve seen on-site marinas for food include Viking Lake, Fremont Lakes, and Branched Oak (though not by the beach).

Q. Are there any dangers to lakes?

A. Midwestern lakes, for the most part, are not very large, but they can be deep. Always swim in the areas marked only for swimming. It’s also smart to never swim alone.

Pay attention to any posted signs. Some lakes we’ve visited have been affected by invasive species that have either made it unadvisable to swim in. For instance, if there are zebra mussels, definitely wear shoes if you’re going to go into the water. Those little buggers are sharp. I’d avoid any area with zebra mussels (it was a lesson we learned the hard way in Clear Lake many years ago).

Previous
10 Awesome Patios in Des Moines
Next
Because Subscribers Are Awesome
Click here to cancel reply.