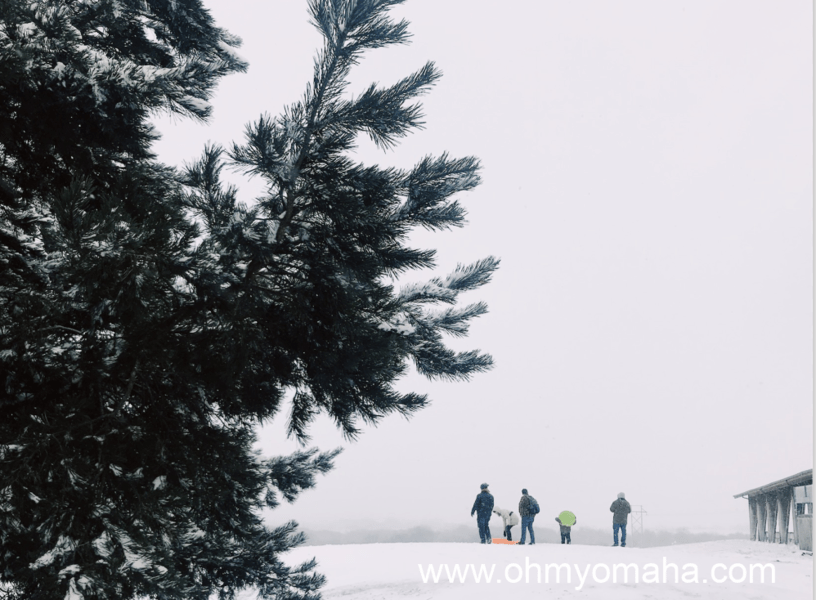 Winters in Nebraska are notoriously cold and windy, and only occasionally snowy. But, with the idea of a pandemic lingering, I’m starting to ponder what we can do outdoors in this state to make this winter enjoyable. Through my planning for my own family, I came up with a great list of outdoor activities in Nebraska this winter. Happy trails…and stay warm!

Snowshoe in a park

The average Joe isn’t going to own snowshoes, so I’m going to tell you about places in Nebraska (particularly near Omaha) where you can rent snowshoes and then do some hiking.

In Omaha, you can rent snowshoes from the University of Nebraska at Omaha Outdoor Venture Center (even if you’re not a student), and then head to nearby Elmwood Park. Try trekking around the golf course there.

** Note: The venture center may be closed or have limited hours due to COVID-19. It is slated to reopen in the spring of 2021.

Head to Fontenelle Forest in Bellevue to rent snowshoes from the visitor center and then explore the trails.

If you do have your own snowshoes, consider trying Neale Woods in North Omaha or make the drive to Indian Cave State Park in Shubert.

In the market for snowshoes? The highest-rated snowshoes on Amazon are $300+. I found more reasonably priced (under $100), and still highly rated snowshoes by Flashtek.

Tips: It’s not in Nebraska, but Hitchcock Nature Center in Honey Creek, Iowa, is pretty close to the Omaha metro area and they rent snowshoes, as well.

We’ve only had minimal exposure to actual ice fishing. Mahoney State Park in Ashland usually plans one weekend a year to teach kids (and their grown-ups) how to do it. My kids enjoy it.

Me? It’s a tad too cold just standing there.

But, if you want to find a prime spot to try ice fishing, try:

By the way, you’ll need a fishing permit. There’s a Nebraska ice fishing forum that can give you more information.

If you want to see bald eagles, bundle up and get outside in Nebraska this winter. You’re most likely to see more of them in January than any other time of the year.

Generally, you’ll have the best luck seeing the grand birds near shallow water along streams, rivers and lakes.

The idea of cross country skiing intrigues me, but also makes me tired just thinking about it. But I know a few hearty Minnesota-types who love it, so it’s making me rethink my opinion.

Ponca State Park (located in Ponca) is the only state park with well-groomed cross country trails. Other parks where you’ll find some decent skiing include Indian Cave State Park and Lewis & Clark State Recreation Area. Not a coincidence, these are located near the Missouri River and have bluffs to explore.

If you don’t own skis, I know you can rent cross country skis from UNO’s Outdoor Venture Center.

** Note: The venture center may be closed or have limited hours due to COVID-19. It is slated to reopen in the spring of 2021.

I’ll be the first to admit that we’ll likely just look for sledding hills close to home. In Omaha, that means the long runs at Memorial Park, or perhaps finding smaller hills in the neighborhood.

But, if you want to consider a few other sled runs around the state, I heard Pioneer Park in Lincoln has a 300-foot wooden sled run that’s legendary.

Mahoney State Park in Ashland also has a wide, and not-too-steep toboggan run.

Yes, tanking. So, usually tanking is a Nebraska summer tradition, where you take a cattle tank down a river with some friends. But every winter in March, a hearty group take part in the Polar Bear Tank Race on the Middle Loup River north of Mullen.

It’s really a whole weekend affair of festivities, an awards banquet, and social fun. But, true to its name, you will be racing other teams in frigid temperatures.

Keep tabs on the next race at Sandhills Journey Scenic Byway.

Nebraska has plenty of outdoor options even in the winter. Am I missing something you like to do in the winter? Leave a comment and tell me what else can be added to this list!