Posted on Published: April 5, 2019 Categories What To Do In Omaha

Discount Tickets To ‘School Of Rock’ In Omaha 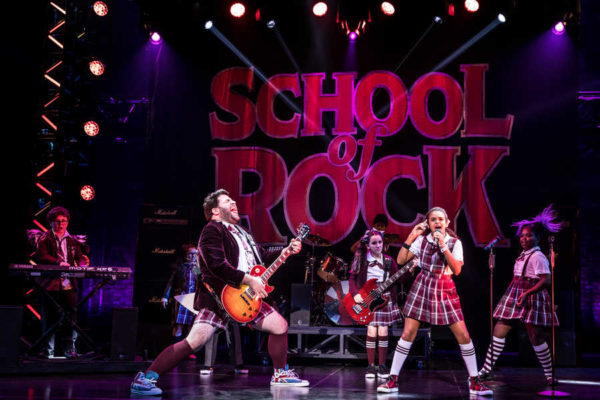 (Be sure to read to the end of this post – I have a ticket giveaway for readers!)

Disclosure: The tickets for the giveaway are provided by Omaha Performing Arts. I was provided complimentary tickets for this post. All thoughts, opinions and typos are my own.

Kids’ Night On Broadway In Omaha

Kids’ Night On Broadway is a tradition across the country that celebrates Broadway musicals and makes it easy for you to bring a kid aged 18 or younger to a show.

What’s extras special about Kids’ Night On Broadway is that before the show, there will be kid-friendly activities and photo opportunities at the Orpheum Theater. Doors open early — at 6 p.m. — exclusively for kids and their guardians to enjoy the pre-show lobby activities. Additionally, the first 150 kids to the theater will receive a swag bag of goodies!

The performance of “School Of Rock” begins at 7:30 p.m. on April 24. If you aren’t familiar with Broadway musicals, they tend to be lengthy (maybe 2 hours or longer), so keep that in mind for kids.

How to get the KNOB tickets: There is a limited number of buy one, get one free tickets for one adult and one child for the April 24 performance of “School of Rock” using the code SORKIDS at checkout at TicketOmaha.com. Don’t wait if you want to get this discount!

If you read nothing else about this special deal, read this paragraph: Kids’ Night On Broadway tickets are limited, so to take advantage if the BOGO offer, you should buy them soon. The promo code SORKIDS is valid for the buy one, get one tickets in all price levels for the April 24 performance while supplies last.

About ‘School Of Rock’

Based on the hit film, “School Of Rock” follows Dewey Finn, a wannabe rock star who turns a class of straight-A students into grade-A rockers. The movie was funny, so you can bet the Broadway musical of it is, too (plus it has the added feature of including musical theater’s first-ever kids rock band). Plus, it has new songs from Andrew Lloyd Webber, in addition to the original songs from the movie.

As Vanity Fair puts it: “Fists of all ages shall be pumping!”

How to get tickets to ‘School Of Rock’ in Omaha

Tickets are available through Ticket Omaha, the official ticket seller for shows at the Orpheum Theater. Tickets range from $32-$92. The buy one, get one Kids’ Night On Broadway ticket offer is only available for the Wednesday night performance, and you must use the ticket promo code SORKIDS when purchasing your tickets. This is good for the purchase of one adult ticket and one ticket for a child age 18 or younger. The promo code works for any price level, and there are limited tickets available.

Ticket tip: If you want to avoid ticket fees, buy your tickets at Ticket Omaha in person. The Ticket Omaha box office is located inside the Holland Performing Arts Center at 1200 Douglas St.

I’ve teamed up with Omaha Performing Arts to give one lucky reader FOUR tickets to see “School Of Rock”! Tickets are for the Wednesday performance of the Broadway musical, which starts at 7:30 p.m.

No ticket purchase is necessary. Must be 18 or older to enter. The deadline to enter is April 18 at 11:59 p.m. CST; a winner will be contact on April 19 via email and will have 48 hours to respond before another entry is drawn. Tickets valid only for the April 24 performance and may not be exchanged for another show date. Ticket package valued at $300.

Previous
Top Family-Friendly Things To Do At Midtown Crossing
Next
Best Omaha Restaurants For Families
Click here to cancel reply.

My first live show would have to be Matchbox Girl at what's now The Rose Theater. Then it was Emmy Gifford Theater.

This looks like it would be such a fun show with the kiddos!

Love the movie and I’m sure the show would be a million times better! (As most books and broadway shows are )

My first show broadway show was Cats in Des Moines with my mom.

This show looks so fun! My nieces would love it!!!