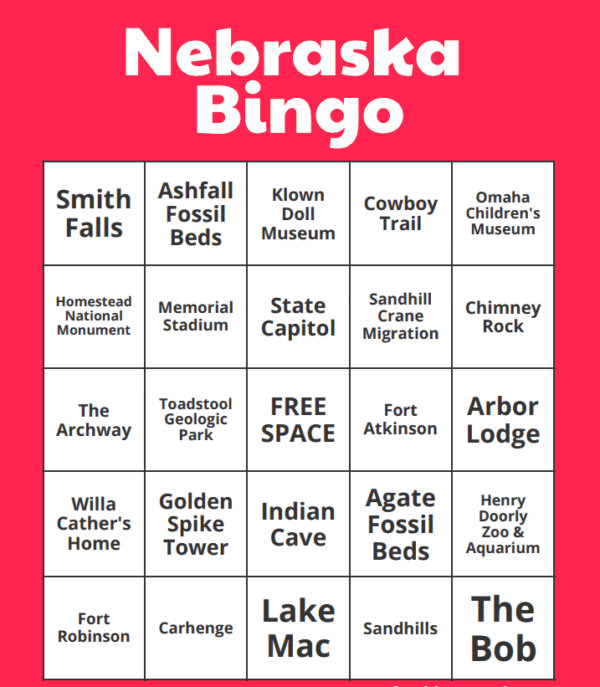 Think you know Nebraska? I’ve explored the state from Fort Robinson State Park in western Nebraska to Indian Cave State Park in southeastern Nebraska, and I’ve decided that there’s so much more I’ve yet to see. With the idea that we should get out and explore more, I’ve created this Nebraska Bingo playing card.

I don’t have a Bingo on this card, yet, but it’s going to be my guide for exploring Nebraska from this point on.

There are a few on the list I have written about, so if you want to get some inspiration in order to complete a row in Nebraska Bingo, check out these posts:

Omaha Children’s Museum – I wrote this post about the perks of a family membership long before I started working at the museum, but it still stands. This museum is best for kids ages 8 and younger.

Indian Cave State Park – This scenic park is known for its trails. There is a cave, but it’s not the kind of cave you’re thinking.

Fort Atkinson – The best time to visit is during the historical re-enactments. They’re held the first Saturday and Sunday of the month, May through October.

Fort Robinson State Park – This is a one-of-a-kind state park in Nebraska. You won’t find anything like it, with it’s jeep rides, stagecoach rides, trail rides, and unique buildings.

With any luck, I’ll add to this list in the next year or two! I’d love to hear where all you’ve been and if you can yell “BINGO” on the Nebraska Bingo card. Leave a comment!

With any luck, I’ll add to this list in the next year or two! I’d love to hear where all you’ve been and if you can yell “BINGO” on the Nebraska Bingo card. Leave a comment!