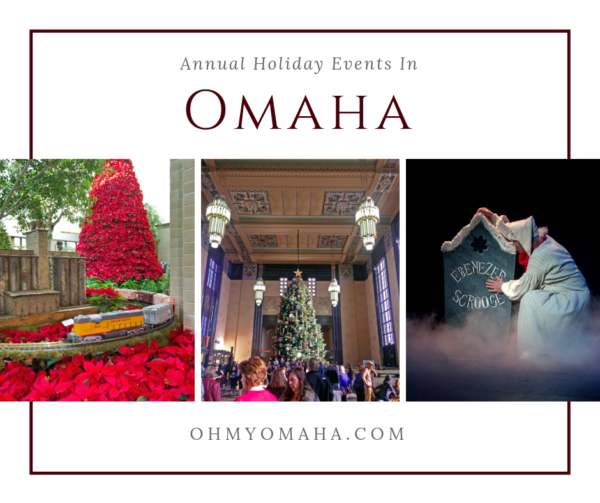 Omaha’s annual holiday season lasts longer than a month, with a ton of family-friendly celebrations and Christmas traditions you can count on each year. The events usually kick off on Thanksgiving night and run through the first week of January each year. Here are some of my favorite Omaha annual holiday traditions:

On everyone’s to-do list is to stroll through the Old Market where millions of lights are strung up for 40 blocks as part of Omaha’s Holiday Lights Festival.

You can count on this festival to kick the holidays off in Omaha. The weeks-long festival includes carolers on the weekends, an outdoor ice skating rink, the free Family Festival, and fireworks on New Year’s Eve.

2019 News: The lights strung around Gene Leahy Mall are one of my favorite parts of the festival. However, starting in 2019, there will be construction that will make it impossible to have the lights up at the mall for a few years. See them this year, before they’re temporarily relocated.

Omaha’s zoo – Omaha’s Henry Doorly Zoo & Aquarium has a couple of events to note. On some weekends, Holiday Happenings is a fun one to catch. Head to the aquarium at designated times to watch Santa and elves scuba dive in the shark tank. The event is included with admission.

For an extra fee, there are holiday events with a meal like Supper With Santa and Pancakes & Penguins.

The Durham Museum – One of my favorite ways to kick off the season is the tree lighting ceremony at The Durham Museum. It’s held the day after Thanksgiving each year, and while it’s always super crowded, it’s worth fighting the crowds to be a part of it.

It’s an interactive show with an Elsa-like character who makes it “snow” indoors, elves, and Santa arriving by chimney. Kids get a turn talking to Santa at the end.

Lauritzen Gardens – Omaha’s botanical gardens have the annual Holiday Poinsettia Show. Kids will like that the model trains run around the displays.

While I’m there, I enjoy stopping by the conservatory. It’s a tropical oasis in the winter. In recent years, the Poinsettia Show has been lit at night for visitors in the evening.

There are a few things you can be sure of, and one is that there will be an abundance of Christmas concerts to choose from each year in Omaha.

Omaha Symphony – “Christmas Celebration” has been an annual tradition for years. While the show changes with music and featured performers, you can be sure that Santa will be there (and many “Santas” who will be dancing at one point).

Handel’s Messiah – I have yet to catch this annual performance by Voices of Omaha, but this concert features a long concert choir singing. It’s usually held in mid-November.

Holidays Under Glass – This is a free lunch-time concert series at the Joslyn Art Museum. If you go, you may want to arrive early to make sure you get a seat in the atrium.

Christmas on Stage In Omaha

Omaha is home to a thriving performing arts scene, and there are quite a few traditional holiday shows performed each year. Plus, many theaters like The Rose will have a holiday show this time of year.

Omaha Community Playhouse – OCP has been performing “A Christmas Carol” for decades and its perfected the musical.  It’s great to introduce to elementary age kids or older (it’s kinda long). The sets, costumes, music and choreography is top notch every year.

American Midwest Ballet – Nebraska Ballet is now American Midwest Ballet, the regions only professional ballet company. They’ve been performing “The Nutcracker” for years, and you can usually catch it at the Orpheum Theater in Omaha or Iowa Western Community College’s Art Center in Council Bluffs, Iowa.

During this interactive show held in December, you’ll talk with familiar characters from Harry Potter’s world in a dining room decorated for Christmas. It’s pretty kid-friendly, so you’re fine going with or without kids.

Read more about the show here.

Magnolia Hotel – Stop by the downtown hotel’s lobby during the holidays to see the chef’s creations. One year, it was a gingerbread train and town.

For holiday shopping in Omaha, there are a couple events that I particularly look forward to.

Hot Shops Winter Open House – Hot Shops is a collection of studios and galleries of local artists working in different media. Twice a year, the open house invites the public in to see their work, watch live demonstrations (check out the glass blowing) and, of course, shop.

The open house is typically the first weekend in December.

Holiday Market – The Holiday Market is Omaha’s answer to Christmas markets in Europe, though definitely not as big. Shop booths of local and regional artists and food vendors in tents at Aksarben Village. Santa is usually found somewhere in the market, too.

The Holiday Market is typically the first weekend in December.