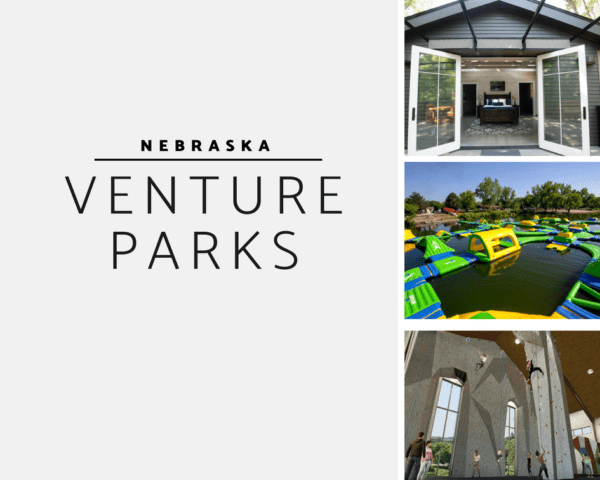 There are a lot of updates happening at four Nebraska state parks and state recreation areas near Omaha, including an addition of a ropes course, “glamping” cabins, and an aqua playground. The Nebraska Game and Parks Commission calls them Outdoor Venture Parks. Here’s a look at what’s new and what’s coming. What’s great for us is that these parks are located within about 30 miles of Omaha.

For the most up-to-date information and to see the artist renderings of everything, visit Nebraska Game and Parks Commission’s website.

What’s new: The Go Ape Ropes Course opened at Mahoney State Park in the spring of 2018. It’s Nebraska’s only treetop rope course, and in it you’ll find ziplines and suspended walkways. There are age and height restrictions.

What’s on the way: Slated to open in the fall of 2018, Mahoney State Park is expanding its Activity Center and adding an indoor rock climbing wall. In the winter of 2018-2019, be on the lookout for a new alpine and sledding hill. That means year-round sliding, folks. There is also the addition of a lazy river at the park that’s been proposed, but no design plan has been selected yet and no installation date has been set.

What’s new: Glamping! The three glamping cabins opened in July 2018, and are an upscale way to camp. The feature I’m most interested in is the queen-size bed on rollers that can be moved out onto the deck to sleep under the stars. This summer, Platte River State Park also opened a two-tiered splash pad. It replaces the pool, and is intended for preschoolers on up to young teens. In 2017, Platte River State Park added Crawdad Creek, which was a hit with my kids. Find it by Jenny Newman Lake – it’s a series of small ponds. Look up program times, where kids (and adults) can learn and explore with a parks employee.

Related post: Glamping isn’t only found at Platte River State Park. Check out this post about all the unique places to stay in Nebraska!

What’s on the way: Sometime in the summer of 2018, they park should have river access for visitors, including kayaks to rent. It may be open already. Be on the lookout for a new RV campground in the fall of 2018. Further ahead in the future, the park will be enhancing mountain bike trails to make it a premier regional destination for mountain bikers. Those trails are scheduled to be completed in 2019.

What’s new: A new floating playground is supposed to open any day now. It’s a huge, inflatable obstacle course, and as such, there are age restrictions. You’ll also be able to rent watercycles and paddleboards.

What’s on the way: A new access point to the Platte River should open in the fall of 2018. No word on being able to rent equipment.

What’s new: Nothing new…yet, though sometime this summer, there should be more access to the river, with expanded rec options like canoeing, kayaking and other water-based activities.

What’s on the way: I’m happy to say the former Aksarben Aquarium is getting a makeover. Expect the renovated center, soon to be called Interactive Exploration Center, to open in the fall or winter of 2018. It should be a state-of-the art nature center and aquarium when finished. This fall, there should be some enhanced and expanded mountain bike trails opening.