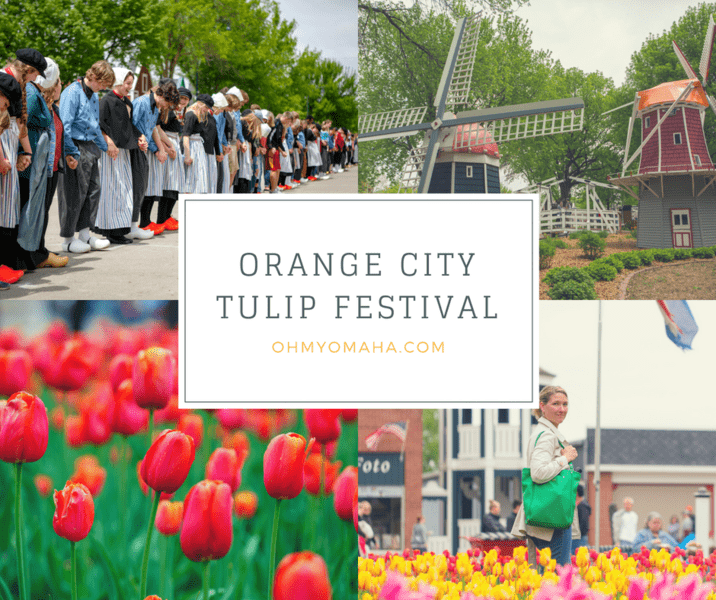 Orange City Tulip Festival is an annual event occurring on the third weekend in May in Orange City, Iowa. Orange City is a charming small town, I discovered, and it turns out, I’m not the only one who noticed. Orange City has been identified as “where the small town American dream lives on” by The New Yorker and Country Living published a story in 2017 analyzing if Orange City was America’s happiest small town.

Disclosure: Our stay was hosted by the Orange City Visitors Bureau. 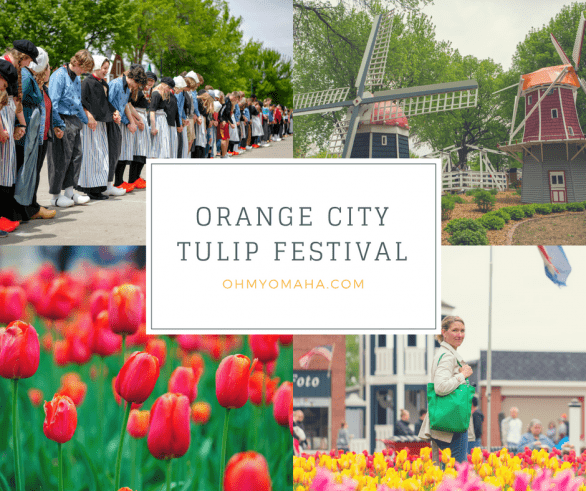 But let’s talk about the Tulip Festival.The charm of this festival is, obviously, the abundance of tulips, the very “Dutch-ness” of everything, and seeing people dressed in traditional Dutch cost

Held over a few days, there are a number of special events, performances and parades to see. 2018 was the 78th year of this showcase of Dutch traditions. I took the family to it for the first time this year. If you want to plan a trip next year, the next Orange City Tulip Festival will be May 16-18, 2019.

Having seven decades to establish things, there are many great traditions to see while you’re attending the festival.

The Straatfeest and Street Scrubbing were my favorites. These occur, parade-like, one after another along Central Street. They are twice a day during the festival.

Tip: The paid, reserved bleacher seats are worth it. We sat in the shade and didn’t have to stake out a spot along the route long before it all started.

The Straatfeest is a chance to see and learn about the different traditional costumes from various Dutch villages, as well as a few performances. They invited kids to join in one of the dances. My daughter looked very serious learning the dances, but I suspect she loved it.

The Street Scrubbing was one-of-a-kind. It was exactly what it sounded like. There were quite a few little boys dumping water on each other, so that was fun to watch. I learned that this tradition comes from Holland when homeowners were required to not only care for their property but for the street in front of their property.

The Volksparade follows the Street Scrubbing, and it’s more of a typical Midwest parade, with the added bonus of nifty Dutch-themed floats and beautiful traditional costumes.

Since 1948, The Dutch Dozen have been performing during the Tulip Festival. It consists of 12 to 14 girls on stage singing and dancing, while their teenage male counterparts add some humor into the show. My son was a particular fan of the boys’ goofiness.

What to eat in Orange City

There are typical carnival food vendors at Tulip Festival, but when in Rome–I mean, in Holland?–you eat Dutch treats. I headed to the Dutch Bakery to try Dutch Letters, a flaky pastry.

And while probably not super traditional, I bought a box of chocolate clogs because, why not? I heard the Little White Store was the place to go for poffertjes, but I didn’t make it to there.

I did make it to Nederlander’s Cafe for a little Dutch dinner. The dinner itself wasn’t super special (though, I can now say I had “snert,” or split pea soup). However, the dessert at Nderlander’s was absolutely worth the visit. We tried their famous bread pudding, a huge treat that was enough for four.

For cute photos of the family with a beautiful backdrop, head to Windmill Park. There are a variety of tulips in the garden, as well as a bridge and windmills for great family photos.

There are the silly photo opps, too, like sitting in a huge wooden clog and sticking your head in a cutout.

If you’re interested in photos of people in their traditional costumes, we found people cheerfully gave us permission to snap a photo. Just ask! While we were at Windmill Park, we found several photogenic families. 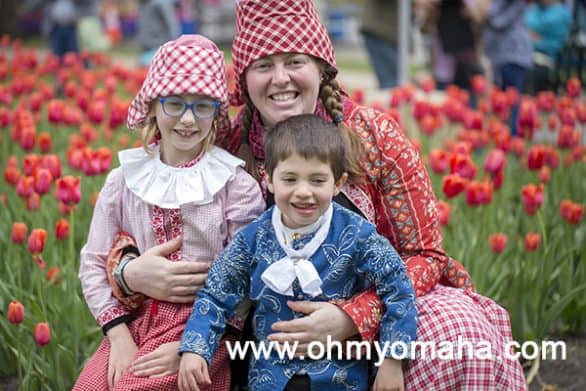 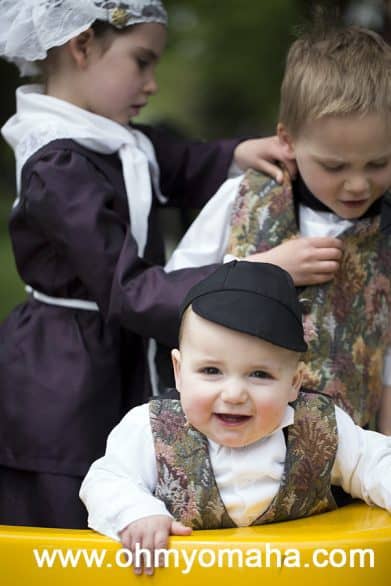 The Straatfeest and Street Scrubbing were my favorite events for more action photos that capture the atmosphere of the day. If you’re not bashful, hop out into the street and get a photo of the performers with the carnival rides in the background.

Can the festival done in a day?

Sure, we did it in a day…and nope, not really.

We spent Saturday afternoon at Tulip Festival and felt like we had as good as an experience as you can with two little kids. In addition to seeing the Straatfeest, Street Scrubbing and part of the Volksparade, petted animals in the petting zoo, tried one of the Dutch games, browsed art vendors, peeked in a store, and watched The Dutch Dozen performance.

We also fit in a little time to we played at Windmill Park and jump in a bounce house.

However, we missed a lot. We had value books of coupons that allowed for things like a free Dutch game, attendance to the Dutch Dozen and carriage rides & pedicab rides). I wanted to do it all, but a mix of rain and tired kids cut our evening short.

My kids will be first to tell you some of the “biggies” we didn’t do, that they wanted to do. We did none of the rides at the Midway and did not take a pedicab nor horse-drawn trolley ride.

The things I had on my to-see list that we missed included: Wooden shoe carving demo, tours of the Vogel Old Mill and the Century Home, and the Fietsen Zangers and puppet show performances. (And if you look at the full schedule, you’ll see even MORE that wasn’t on my list and yes, we missed them all.)

If I could do it again, I think we would attend Friday and Saturday (or maybe just Friday night and the full day Saturday). I think it would be fun to attend the fly-in breakfast held really early on the Saturday morning of the festival.

But I don’t regret just going one day this year. 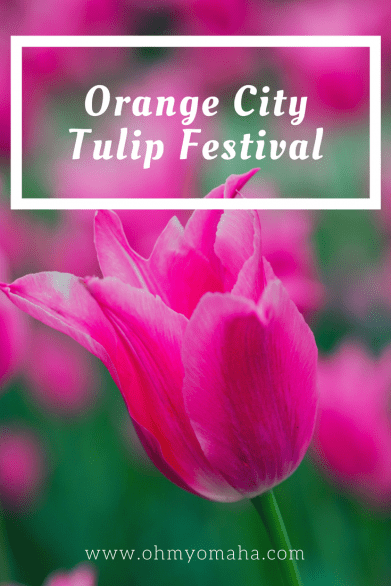 Where to stay during the Tulip Festival

We stayed at the Hampton Inn & Suites in Orange City. While it’s not quite within walking distance of the festivities, Orange City is not a huge city, so it was conveniently near it.

The hotel had the required essentials for traveling families: A pool and a complimentary hot breakfast.

Check back for a review of Hampton Inn & Suites soon, plus details on what families can do in Orange City when it’s not the Tulip Festival.