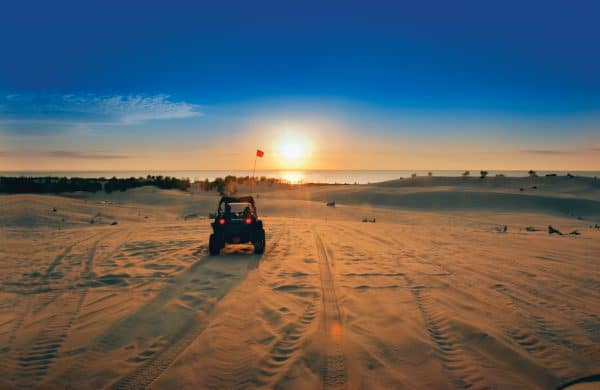 This summer, I’m planning a road trip through Michigan. I’ve researched books, travel brochures, blogs and Instagram, as well as picked the brains of friends, to gather a bucket list of stops. This Michigan bucket list contains natural wonders, quirky pitstops, historic landmarks, and must-see restaurants – more than I can visit on this single trip.

This island inspired the entire trip. Mackinac Island is car-free, so the only way to get around is by bike, horse, or walking. There’s the Grand Hotel to see, fudge to be eaten, and carriage rides to be taken.

Ride the rides at Michigan Adventure

This big theme park is probably on every vacationing family’s list. My kids are starting to turn into thrill junkies so I know they’d love it there (I’m secretly glad they fall below the height limits for some rides that make my stomach turn just looking at their photos).

Quick stop on the Alpine Slide

I’ve never done one of these things before, but have seen them in Colorado. This alpine slide like a fun pitstop along the way between Grand Rapids and Traverse City.

This gem in Charlevoix would appeal to my Sofia the First loving daughter and my son who loves castles and dragons. Castle Farms has hedge mazes, an outdoor model train, and an Enchanted Garden.

Have you heard of these? You can find the state rock, which is actually a fossil, around beaches near Charlevoix and Petoskey. They’re pretty distinctive looking things and sound like a fun, free, outdoor activity for us.

Two towns in Michigan have European-esque appearances: Holland and Frankenmuth. I’d love to go to both, not just for the photo opps of a windmill or German beer hall, but because they sound utterly charming.

If we make it to Frankenmuth, I’d like to stop at Bavarian Inn Restaurant, where you can sign up to be a German baker (briefly) and learn how to roll a pretzel. Then you, of course, get to eat your handy work. (I found out about this from Just Me Regina.)

And not European, but fun to say, there’s a town called Hell. I’d like to go to Hell and back someday.

Play in the trees

You can bet with large forests, Michigan has some amazing tree adventures. Two that caught my eye include Wildwood Rush near Boyne City and the John Ball Park Zoo in Grand Rapids (it’s on my Grand Rapids Bucket List, naturally). Both have ziplines and ropes courses.

If you’re curious about the Grand Rapids’ ropes course, we tried it out and I talked about what the kids thought of it here.

I’ve been told I need to seek out and try a pasty while I’m in Michigan. These things, so I’m told, have a flaky crust with meat filling and is a favorite in the Upper Peninsula. Sounds good to me.

Want to drive a Model T? The Gilmore Car Museum has a Model T Driving School. How about a horse carriage? You can on Mackinac Island. I’m not sure which I’m more confident in driving, so I might just leave it up to the pros and take a tour.

If you’d rather be a passenger, both modes of transportation have options: You can ride Model T cars at Greenfield Village near Detroit and there are plenty of carriage options on Mackinac Island where you’re just the passenger.

Another option? Driving a sand-buggy. You can drive one in the Silver Lake Sand Dunes with Silver Lake Buggys.

I want to ignore TLC’s advice and go looking for waterfalls in Michigan, particularly seek some out in the Upper Peninsula. Fun fact: Estimates differ regarding the number of waterfalls in that region, but most pin the number between 150 to 300.

I’m a sucker for a meal with a view, and waterfront is my absolute favorite. It shouldn’t be too hard to find a lakeside restaurants – in Michigan, you’re never more than 6 miles from an inland lake (and no more than 85 miles from one of the Great Lakes).

I’ve been scouring this post about incredible waterfront restaurants in Michigan for inspiration.

Swim in a Great Lake

There’s a reason why Michigan is called the Great Lake State. Four of the five Great Lakes touch Michigan shores – Lake Superior, Lake Michigan, Lake Huron, and Lake Erie. There’s a good chance I’ll be dipping a toe in at least one.

Breakfast is my thing (see this post about memorable Midwest breakfasts). I’ve been scouting out some options for our Michigan trip, and I’ve found some great ones.

There’s J.W. Filmore’s Family Restaurant in Petoskey (thanks for the tip to try the french toast, Annie!) and the Windmill Restaurant in Holland (again, thanks to Annie, mentioned above, I know to order the cinnamon roll early).

You guys, Michigan has more breweries than I know what to do with. Frankenmuth is like the Munich of the United States. I’ve been browsing lists of family-friendly breweries so I can sample local beers and not feel weird about having the kids along.

There are quite a few that are spacious, welcoming, and have kids activities to keep the kids entertained (with kids menus to boot). Grand Rapids has quite a few to choose from, and along the Western coast of Michigan, there’s one with a dog theme and a lakeside view (Old Boys’ Brewhouse). We found a family-friendly brewery (Grand Rapids Brewing Co.), and I wrote about it here.

Eat all the ice cream

I can’t resist ice cream, especially when on a summer road trip. Here are some spots on my radar: Moomers Homemade Ice Cream (Traverse City), which has more than 100 flavors on a dairy farm, and the 1950s-themed restaurant House of Flavors (Ludington).

And then there’s the ultimate Michigan flavor I’ll have to try: Superman Ice Cream.

This shouldn’t be hard to do. Michigan has 142 lighthouses.

I hear one of the best ways to experience this massive park for the first time is to take the Pierce Stocking Scenic Drive. I hear No. 9 on the route is a good stopping point for a scenic view of Lake Michigan. The kids could do the National Park Service Junior Ranger program there if we have time.

I posed the question to my Facebook readers on some of the not-to-miss things in Michigan, and this nightly summer fountain show came up.

Have a cherry or two

Michigan is known for its cherries. Traverse City is home to the National Cherry Festival starting every July. Alas, our timing is off and we won’t be there for the huge festival. So, we might just have to sample a cherry pie or two…just because.

I’ve been told to go to Cherry Republic and Grand Traverse Pie Co. for the best cherry products.

Hit the open water in a boat

I like the idea of renting a boat, but since we have zero boating experience, I think it will remain just an idea. Instead, we could sail in a sloop from the Michigan Maritime Museum in South Haven.

If we make it to the Upper Peninsula, there are several boat options for seeing Pictured Rocks National Seashore, including one with a glass bottom. More simple of a ride is the Saugatuck Chain Ferry, which is a five-minute hand-crank ferry float. 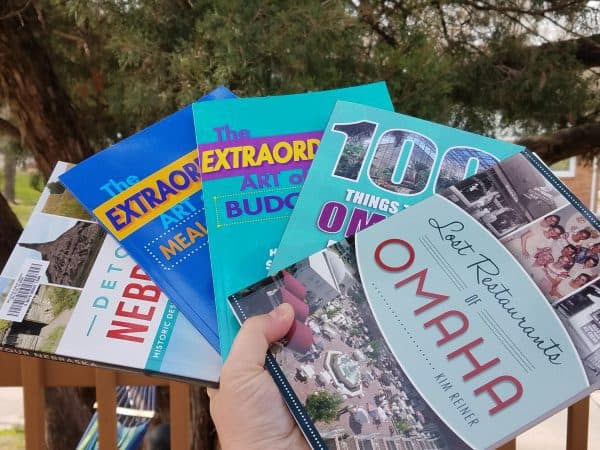 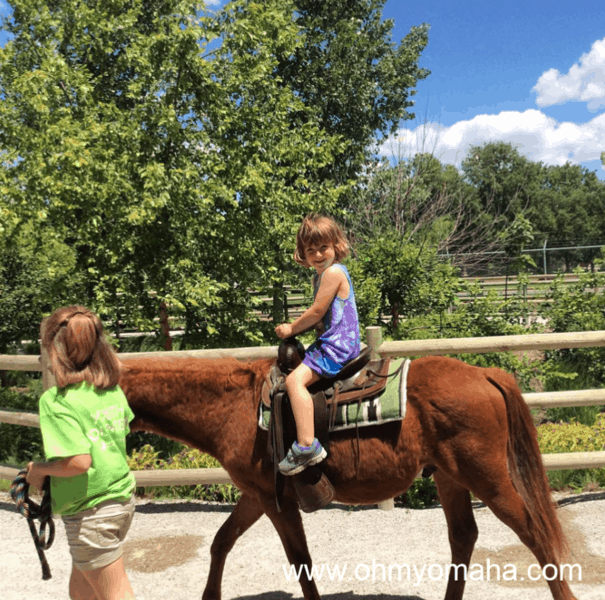 Next
Best Things To Do With Kids In Lincoln
Click here to cancel reply.

Don't forget the Upper Peninsula (UP) in your trip. You have some of the most beautiful places in Michigan that are in the UP such as Tahquamenon Falls or Pictured Rocks National Lake Shore. Here are a few other suggestions for the UP - Keweenaw Peninsula, Porcupine Mountains, Sault Ste. Marie. Have fun, Michigan is a beautiful state with lots to do.

You're absolutely correct. I was going to try to fit in a visit to the UP on our road trip and the more I looked into it, the more I started to realize that region deserved its own trip.

Take a road trip around Michigan Thumb. it’s for those who want to get off the well beaten path.

I appreciate the tip!

We love Silver Lake. My boys have a blast on the dunes and going tubing! They also have an amazing ice cream place!

This list is pretty good! The thumb of Michigan is commonly missed in planning vacations; mostly because a big chunk of it is flat farm land, which isn't to exciting to most people. But there are a few gems! If you go to the tip of the thumb to a little town called port Austin you can rent kayaks and kyak in Lake Huron out to a really cool spot where you can see turnip rock. It's not as exciting as pictured rock, but it is a neat lower peninusula sight! If you take the lake view up to port Austin, the best roadside stop is called white rock. It's small, but it has a little, and I do mean little, walk through in a wooded area and a walk down to get close to the water. Not many people stop here, so it's usually not crowded and it is the prettiest of all the roadside stops.

I love your insider tips, especially for Port Austin! I had so much trouble narrowing down my road trip stops for last summer, that I've already begun started thinking about the next Michigan road trip.

My wife and I have recently returned (to the UK) from our latest USA road trip. We started (and finished) in Chicago - driving through Iowa, Minnesota, North Dakota, Wisconsin, Michigan and Indiana. Although we had a great time in every state we visited, Michigan is definitely our favourite state now and is somewhere we would love to visit again.

Mick, what a great road trip! Hopefully you can plan another US road trip and manage a route that passes through Michigan again.