I’m very excited to announce that I’m partnering with Omaha Storm Chasers this year! If you haven’t been to a game, this is the year to plan a family outing. The Storm Chasers are celebrating their 50th season, and they have a ton planned that appeals to families.

A ballgame at Werner Park is always a family-friendly experience – I’ve written about taking kids to a Storm Chasers game before. But this year, they’ve added some extras for the big anniversary. I’ve combed though all of their promotions to share my favorite things about the season. 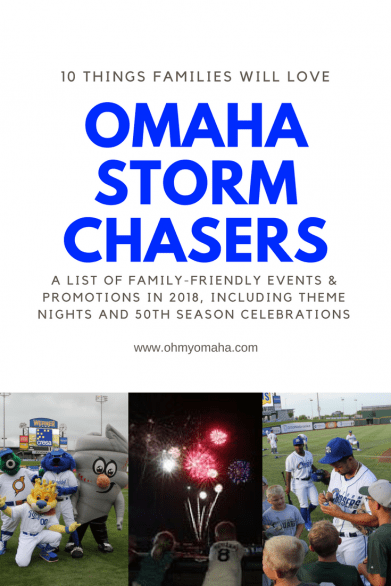 Here are 10 things families are going to love about Storm Chasers Games this year:

From music to flashback jerseys, the Storm Chasers will celebrate a decade each month of the season. Check the calendar for nights where there are bobble head giveaways connected to each decade, Flashback Fridays, and beer specials by the decade.

The big game falls on July 20, a Friday night. So, in addition to the 1985 Royals Flashback Jersey, fans get to enjoy Friday Fireworks. 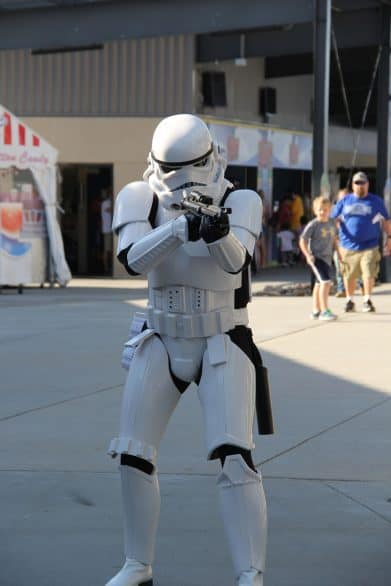 The Star Wars themed night at the park is on May 4 (get it?). Photo courtesy Omaha Storm Chasers

These are an annual favorite, and if you have Star Wars or princess fans in your house, there’s a good chance you’ve gone to one of these games. The theme nights that stand out to me include Star Wars Night on May 4 (get it? May the Fourth be with you.), Superhero Night on June 30, and Daddy-Daughter Night on (rescheduled to Aug. 4).

Tip: There are fireworks following the games on Star Wars Night and Daddy-Daughter Night.

In addition to five flashback jerseys that tie into the jerseys I just mentioned, there are other designs you’ll see throughout the season. Many will be auctioned off to benefit charities.

Star Wars fan? Go to the May 4th (get it?) game to see the Star Wars X-Wing Pilot Jersey presented by ParentSavvy.com. It’s going to be auctioned off. There are 10 special jerseys worn this season, and I think I have my eye on the look out for the Omaha Runzas Jersey presented by…guess. It’s presented by Runza, and you’ll see it on the diamond and then auction off on June 9. 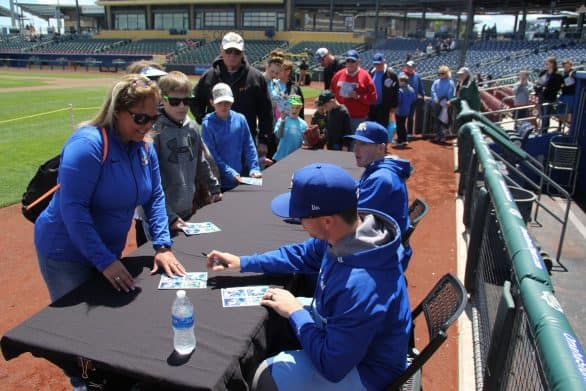 Fifty years is a lot of years to commemorate, and a lot of players to recognize. If your kid loves meeting baseball players, plan for these games: 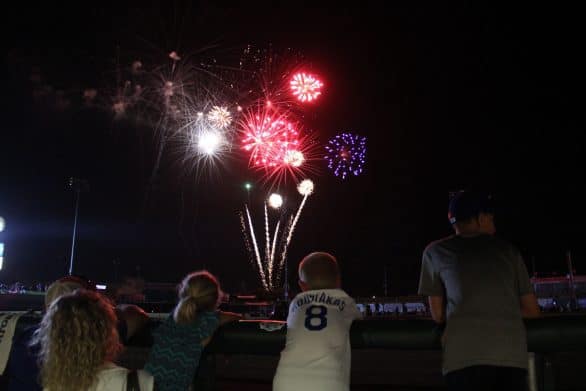 All season long, if the home game falls on a Friday night, there will be fireworks following the game. There are 11 Friday nights in the schedule, and the first one is April 6.

Of course, they aren’t limiting the fireworks to just Friday nights this year. The super popular Independence Day games end with fireworks (those two nights are on July 2 and 3).

There are also fireworks following the game on Sunday, May 27, and Saturday, July 21.

Bark in the Park

If your kids are of the four-legged variety, take note of these dates: April 18, June 6, Aug. 1, Aug. 15 and Aug. 29. You can bring your dog to the game and sit on the berm on Bark in the Park games (just be sure to pre-register).

Tip: Bark at the Park nights happen to coincide with Weiner Wednesdays…so cheap dinners for all! Full-sized hot dogs are 25 cents each at Wednesday evening home games.

Attending the Storm Chasers game as a family was included in my list of 25 things to do under $25 in Omaha. Prices are low to begin with but you can save even more money on game day with the First 50 Kids promotion. The first 50 kids (10 years and under) to arrive at the Werner Park Ticket Office on day of game are able to purchase McDonald’s Berm tickets for just $1, all season-long, regardless of game promotion. The berm is that grassy seating area. Details here.

If your kid is too young to stay up late for evening games, the Sunday afternoon home games should be on your radar. Known as Family FunDays, there are some great opportunities for kids to be out on the field. Check the schedule for the dates the can run the bases or play catch on the field. Family FunDays also always have clowns and balloon artists. 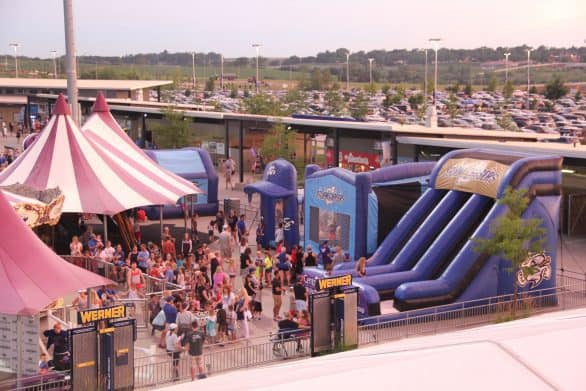 My kids could spend the entire game here if I let them. The Centris Family Fun Zone at Werner Park is an extra fee, but totally worth it. Photo courtesy Omaha Storm Chasers

If you’re a regular at Storm Chaser games, and you have kids, chances are, you’ve been to the Centris Family Fun Zone. This was definitely my kids’ favorite part of Werner Park in their young days – I’m curious to see if it still is when we go this season. You don’t get to watch much baseball from there, though.

The Family Fun Zone is a large area behind left field with inflatables, jungle gym, and a carousel. It does cost $6 for kids ages 3+ to enter if you don’t have a Centris ATM, Visa Credit or Debit card.

There’s also a combo pass option for $7, which includes playing in the fun zone and miniature golf for $7.

See the full calendar of promotions here. Since this list is limited to just 10 things you’ll love, I couldn’t fit in all the concerts, giveaways, and more planned.

And before I end this, here’s my money-saving tip: If you want FREE parking, drive past all the signs for the paid lots until you reach the dirt lot on the north side of the stadium (take it with a grain of salt that it’s still free since I haven’t been to a game in years).

Season starts March 26 with an expo game against the Kansas City Royals. First home game of the season is April 5 (Thirsty Thursday, y’all). See the full schedule or purchase tickets.