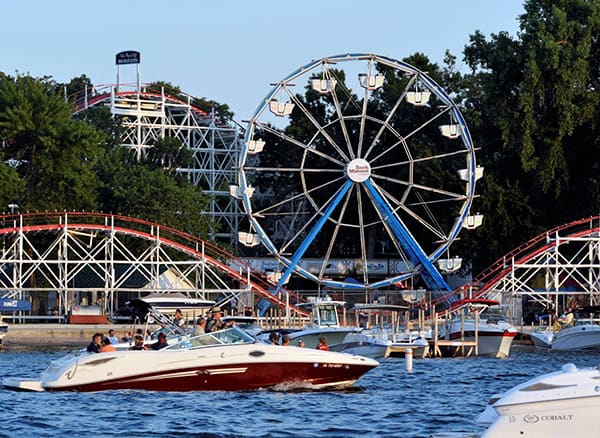 The more I travel through Iowa, the more I realize I’ve just scratched the surface of what families can do in Iowa. The Great Iowa Road Trip highlighted fun on the water and by rail, and our weekend in the Amana Colonies gave us a taste of the cultural offerings of the state. But, there’s a lot more we have yet to see and do in Iowa.

Here’s my Iowa bucket list for exploring the rest of what the state has to offer:

Ride the world’s steepest, shortest scenic elevator – Bet you didn’t know that existed. It’s called the Fenelon Place Elevator, and it’s one way to discover a great view of Dubuque (not to mention see two other states while at the top).

Explore caves – Maquoketa Caves State Park in eastern Iowa is on my must-visit list, with its 16 caves you can explore (better pack the flashlight). If it’s on yours, too, make note you have to attend a brief program before setting out on your adventure.

Iowa Great Lakes Region – I’m one of those rare people from Omaha who has never been to Okoboji or any of its nearby towns surrounding the lakes. It’s taken on mythical vacation status in my mind since everyone I know has fond childhood memories of trips there or goes every summer with their kids now.

Things I want to do there: Take the kids to Arnold’s Park Amusement Park; try a local brewer, like West O Brewing Co.; and I thinkThe Barefoot Bar at the marina looks incredibly fun. There’s also the new Dickinson County Nature Center that just opened, and it has a human-sized honeycomb to crawl through that I might attempt just to embarrass my kids.

Related post: Guide to Okoboji in the Summer With Kids (Yep! I finally went to Ojoboji)

Need For Speed –  One of Adventureland’s rollercoasters (The Monster) has the only negative-G loop in the Western hemisphere (which means you feel like you’re falling out of the coaster). I’m not totally convinced I want to have that feeling, but I’ll admit at least sounds cool. Ziplines are more of my speed. For the longest, fastest and highest ziplines in Iowa, I think I’ll head to Sky Tours Zipline in Dubuque.

Visit Effigy Mounds – I’ve seen pictures of this unique site in Harpers Ferry. Effigy Mounds is an American Indian burial and ceremonial site located in the Upper Mississippi River Valley. The national monument contains more than 200 mounds, and many are shaped like animals.

Iowa State Fair – To be included in the book “1,000 Places To See Before You Die,” the Iowa State Fair must be something that truly stands out over other fairs. For that reason alone it should be on every Iowa Bucket List. But there are also butter cows, legendary corn dogs, and Ye Olde Mill to see. Read Iowa State Fair tips here.

Reiman Gardens – I heard these gardens on the campus of Iowa State University in Ames are beautiful to visit. Expansion plans for Reiman Gardens should conclude fall 2018 or spring 2019, and will feature multiple waterfalls and a reflecting pool. While there, I think we’ll look for Elwood, the World’s Largest Concrete Garden Gnome.

RAGBRAI – Someday, not this year, but someday, I will ride RAGBRAI with a fun group of friends and Mr. Wonderful. If you’ve never heard of it, RAGBRAI is a huge bike ride across Iowa each year. Each stop is a chance to see a new community and enjoy the festivities they’ve planned for the bikers who are in town for a mere night.

Exotic Animal Races – Prairie Meadows Race Track in Altoona has live horse racing from April to October, but once a year, things get crazy. Camels, zebras, and ostrich races are held in July (this year, it’s July 15). There are also corgi and dachshund races on the schedule, if that’s more of your speed. Word is it’s FREE and open to all ages but gets very, very crowded (and notably, open to all ages, doesn’t necessarily mean kid-friendly since it is a casino). Arrive early to get good parking, and if you want to beat the heat, make reservations to sit in the third floor club house.

Go to jail – Honestly, there is no good reason why I haven’t been to the Historic Squirrel Cage Jail in Council Bluffs. I used to work blocks away from it. It’s one of the oldest rotary jails in the United States (think “lazy Susan”-esque). Word is, it’s haunted, too.

Have a European getaway – I’d love to take the kids to Europe but realistically, European-inspired towns in Iowa are a more realistic getaway for us at this point. I can get a taste of Holland by visiting Orange City, Pella, or Elk Horn & Kimballton. Windmills? Find one in Pella or Elk Horn. Tulip festivals? Find one in Orange City and Pella (every May). I’m pretty excited to say I’ve got plans to go to Orange City’s this year; it’s held May 17-19, 2018. There are parades, a carnival, performers, and a ton more. I can also venture to Czech Village (Cedar Rapids) or Decorah for a little Norwegian heritage.

Related post: We went to the Tulip Festival! Check out our experience in Orange City in this post.

Stay in a century-old hotel – Iowa has a handful of grand hotels, including the only remaining Frank Lloyd Wright-designed hotel that’s still remains, the Historic Park Inn Hotel in Mason City. You won’t find many super close to Omaha except if you consider Perry, Iowa close. There, you’ll find the Hotel Pattee, built in 1913. Besides looking exceptionally charming, it has a bowling alley, and that my friends, is what you call a vacation hit when traveling with kids.

Matchstick Marvels – This museum in Gladbrooke looks like one my kids would love. In the summer 2018, they will unveil a matchstick replica of the 1970 Dodge Charger from the “Fast & Furious” movies that’s more than 11 feet long.

Try the nuns’ candies – There are nuns making caramels in Dubuque and they’re world-famous. I’ve got Monastery Candy on my list, and you can bet their hazelnut meltaways will be the first I try.

Complete the A to Z Foodie Trail – This is pretty ambitious and, for me, will likely take a few years. The trail is in Marion and Mahaska counties featuring 26 stops in a loop through Pella, Leighton, Oskaloosa, Knoxville and Pleasantville. I just need to stop at each place, get my selfie with the designated letter of the alphabet and move on quickly.

Dine at The Hall – The Hall in West Des Moines sounds like a pretty unique place for a meal and drink. There are food trucks inside a former 1890s railcar barn and iron foundry, and soon, Foundry Distilling Co. is set to open there.

And while I’m on the topic of ice cream, there’s an old-fashioned soda fountain in Grinnell I want to check out: Candyland Station. Their specialty is made of vanilla ice cream, marshmallow, chocolate toppings and Spanish peanuts.

Zombie Burger – This Des Moines staple is a visually cool place to visit…if you like zombies; if not, stay far away. The food is tasty and has fun names like the Dead Moines Burger. The wait is worth it. We keep going here every time we’re in Des Moines (or even just passing through).

Sleep in a yurt – You don’t find many yurts around here. I stayed at one in Clear Lake. Here’s how the night went down.  While you’re in Clear Lake, better stop by the legendary Surf Ballroom.

Ledges State Park – Don’t skip canyon drive, which is a one-way route where the roadways are sometimes covered by Pea’s Creek. It’s kinda cool, but I’ve heard it can sometimes completely flood out the road way. The park is great for hiking and exploring the water ways.

Story City Carousel – This hand-carved wooden carousel in Story City was built in 1913 and still works. We stopped there for a quick ride and it was a hit with my young kids.

Des Moines Arts Festival – It’s one of the largest arts festival in the region, and pretty fun for families. We visited during our Great Iowa Road Trip.

Iowa State Capitol Building – I’m not one to visit state capitols, but even I had to stop and see the beautiful library there. Find the capitol building in Des Moines.